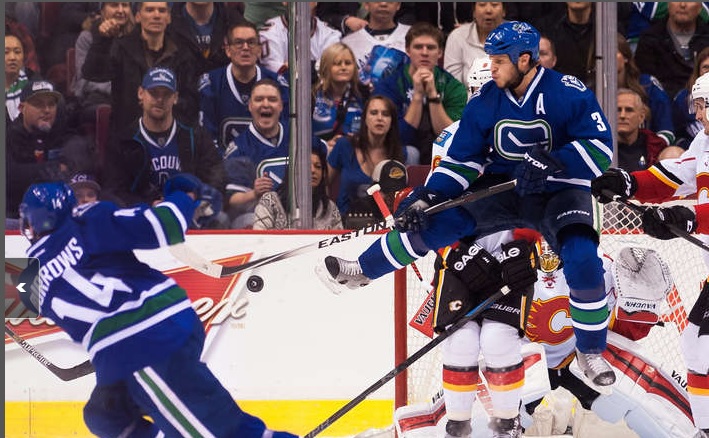 So the season is almost half over and the Nucks sit in the middle of the playoff crowd in the Western conference. I am pleasantly surprised by how well the Canucks have played in most of the games this year. And then I see a stinker of a game against Calgary. Some would say bad luck (goal post won the game) or an "off" game. I would say it’s the inconsistency that was expected at the start of the year. I think the quick start brought with it delusions of grandeur. And the .500 team we’ve seen lately is a little closer to what the Canucks are in this conference. 49 points leaves the Nucks in 5th place. They have two 5-game eastern road trips left that the Nucks have to…..need to win 6 or more to give themselves breathing room against conference teams.

I have heard some say that a .500 team could be good enough to get the Nucks into the playoffs. I think that line of thinking is some scary shit. Unless the Nucks go into the playoffs hot, which meant they just snuck in and would have to face Anaheim or Chicago in the first round. (Might not be a bad thing…). The people or computers overlords at sportsclubstats.com have created a nice percentage sheet of the Nucks chances of making the playoffs depending on how they play. 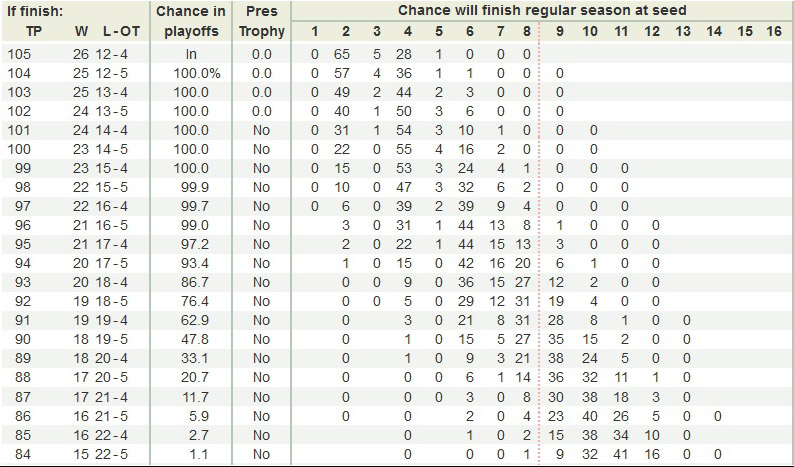 Of course for any chance of this team going into the playoffs or farther than a quick 1st round exit they need a few things to happen.

1. No major injuries. Hamhuis should be back soon and heaven forbid a Sedin goes down. (I knocked on wood for all of us.

2. Sedins need to score more. Seems like a simple plan. If the PP can score they will get more room to operate 5vs5.

3. Hell, all of the lines to score more. The Nucks are averaging 2 goals/gm since the 7-1 ass-kicking of the Coyotes.

4. Kassian needs to put up some numbers in the second half or else he will be traded this summer.

5. Casual Kev needs to appear less often. I know the absence of Hammer has led to Kev being less aggressive on all fronts. Once Hammer is back and has a partner he can trust, it lets him carry the puck more, fight more and just be more of a prick on the ice.

I leave the list at 5 and pray two of these things occur. I include no fancy stats in this article as Corsi and Fenwick both piss me off. Baseball fancy stats are usually more straight forward as they deal with an individual and the decision they made or didn’t make against a certain pitcher on a certain day, in a certain inning, on a certain court during some sort of weather….you get my point. One guy against another. Hockey fancy stats and those who massage those numbers seem to ignore that those stats are less reliable for prediction as the stats themselves are less individual driven. The actions of your teammates and opponents on the ice at that particular moment have more of an effect on a player’s stats than the actual player. An example….I could get out on the ice and every time I cover a guy or a zone, the opponent never gets a shot off. At the end of the game I have a negative Corsi because my teammates didn’t do the same. "But westy99, we don’t look at individual games, we look for long term patterns." Why? The players I play with don’t always stay the same, the lines I play against are always different. I never have a direct opponent…..I have opposing players who make split second decisions that affect my stats. You know who are watching fancy stats develop in the hockey world and will rip them apart at the first chance……hockey agents. The first team to say a player has a bad Corsi rating in arbitration, is going to see one of these analytics guys point out all the flaws in trying to attach these stats in a fluid sport like hockey versus a static sport like baseball.

Now having said all of this….I love stats. I love to see sites like war-on-ice.com come up with new ways to look at stats. But the knowledgeable watcher has to remind the casual one that while stats may show one thing, you still should watch the game to see why the stats came out like that. Right, Nick.