This season, the theme for the Vancouver Canucks is 'Change Is Coming', and indeed, with new faces on and off the ice, change is apparent. How will these changes translate into the on-ice product? Can they hold their own in the insanely tough Pacific Division? Are they re-tooling or re-building? Yankee Canuck, Kent Basky and Nick Mercadante take on Three Big Questions.

1. What will the "Desjardins effect" be?

By: Yankee Canuck and Kent Basky

If you've been around long enough, you've seen plenty of coaching styles roll through Vancouver. I've been a fan since 1994 and I didn't quite grasp what a Pat Quinn team looked like until the forgettable Rick Ley years came along. Then Tom Renney popped his head up and was laughed out of the Province in favor of - say it with me - Mike Keenan. Iron Mike gave way to Marc Crawford at which point the Canucks finally enjoyed a wee bit of success. But the Crawford teams can hardly be touted as examples of defensive-minded teams either. Crawford departed in favor of "offensive zone squatter" Alain Vigneault and then, well, Torts (and technically Mike Sullivan which was a laugh riot for six games).

The point being in the past, oh, 20 years, the Canucks have had plenty of bad rosters with bad coaches. Last year you could argue they had a decent roster with a bad coach. Now they have - let's be honest - an average team that's getting younger, with a coach in Willie Desjardins who's had great success at other levels. One thing seems clear: there's a vibe around the players thus far that wasn't there last year. They're excited, and it's shown on the ice in preseason. Let's not kid ourselves, this is not a Stanley Cup contender. But the seeds for the future are being laid, and with the trio of Hunter Shinkaruk, Bo Horvat and Nicklas Jensen all impressing at camp, the move to bringing the team back to respectability starts now.

2. Can their new core lead them against the Pacific heavyweights?

This is one of the biggest question marks facing the Canucks going forward. How do you dismantle teams built to take you down? After the Canucks came within a game of winning it all in 2011, A number of Western Conference foes became a hell of a lot harder to play. They seemed to have a counter for everything the Canucks could throw at them, and in turn the Canucks had no answer for their attacks. This is probably Mike Gillis' greatest failing (well, that and his destruction of the Canucks' greatest strength in trading away both of their goaltenders): His inability to make changes and get his coaching staff to do the same, to keep up with the Joneses of the West, as it were.

With a shuffling of the deck, moving out Ryan Kesler (to a divisional rival no less, because Kurt Overhardt is a really, really terrible person), and new faces via trades, free agency and the aforementioned draftees, my guess is that they are still going to struggle BUT they're not going to be a pushover. Last season was a perfect storm for the Canucks in terms of things going horribly wrong. The injury situation was nearly comical, the number of players going through unthinkable slumps combined with a coaching strategy that was doomed to fail and the ongoing goalie drama left Vancouver dead in the water. With Ryan Miller looking for a chance at redemption, Eddie Lack healthy, and a number of other Canucks coming into camp looking better health-wise and with a chip on their shoulders to do whatever it takes to put last season behind them, one thing this team will be that they weren't last year is competitive.

Can they dismantle LA? Probably not, and should Anaheim be able to recreate their regular season dominance from last year, then they will have trouble again. San Jose, however? I see the Sharks and how the Canucks play them this year as a good measuring stick. The Sharks did next to nothing this off-season, and you could easily argue that every move they made has made them worse. As their descent from the upper echelon begins, they're around where the Canucks find themselves, albeit heading in different directions. If the Canucks can do well against the Sharks (and Coyotes, for that matter) along with the sad sack Oilers & Flames, there's hope for them to squeak in to the playoffs. It would be a surprise, but not beyond the realm of possibility.

3. Are we watching a re-tool or a rebuild?

The party line with the new regime is almost definitively a "re-tool." I would tend to agree with this...I think. At least just based on the maneuvering they've chosen to do. They made a ton of moves this offseason, though. That's for certain. "Trader Jim" Benning has earned his nickname.

First things first. Luongo was moved before the Benning era began. So stop tacking that on. And Schneider too, for that matter. I guess because who needs franchise goaltenders with consistent performance metrics? Anyway.

The heir apparent, Eddie Lack, struggled with decreased rest between starts in March (88.9 SV%), his first full month of starter duty. And he has a long way to go with some of his fundamentals, namely in the balance department. For example, his back is much more upright than his Swedish brethren tend to carry themselves and he often struggles in scrambles side-to-side as a result of being off-balance. When the book gets out on a new goalie, they have to start making adjustments. I think if this were a rebuild though, they would give the kid full-time work at the NHL level to figure things out. And they would give young prodigy-turned-question-mark Jacob Markstrom, who they acquired in the Lu trade, some burn right behind him. Instead, they picked up Ryan Miller on a 3-year $6m AAV contract that is about comparable to other top 15 goaltenders with a track record, if not a bit pricey for his advanced age. And snuck Markstrom through waivers to get time in the AHL. Not the move of a rebuilding team. Not at all.

Sure, the very first trade Benning made shuttled out mainstay Ryan Kesler. He had some pretty heavyweight years with the Canucks. Some pretty memorable postseason moments during their more competitive seasons. But let's face it, he also forced their hand on a trade. The Anaheim Ducks did give up a late first-round pick that Benning turned into promising prospect Jared McCann. However, targeting 26 year-old Nick Bonino, who is most certainly trending up, but is a bit older than other youngsters in the flush Ducks pipeline, isn't a move by a team in full rebuild. This and the addition of a reclamation project in 24 year-old Luca Sbisa smells like re-tool to me.

The Jason Garrison trade appeared to be a bit of a straight salary dump, freeing up $4.6m of cap space. The Canucks were up against the cap as is, and they got a second round pick in return. Seems like a rebuild move on its face. However, while Garrison and his big shot produced on the PP as much as anyone (4g, 11a) on a team starved for offense last season, he also was a weak link in shot suppression, as indicated by his below average even strength shot rate against differential in high probability scoring areas (high and low slot, front of the net): 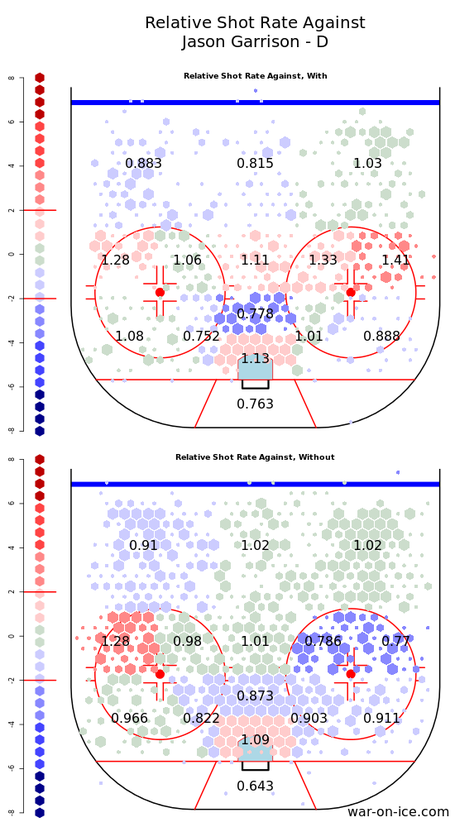 Garrison ran at a cool -6.8% 5v5 Corsi Rel (that's bad). Worst amongst the Canucks' top 6 defensemen. That was while getting the second easiest Corsi Quality of Competition. Truthfully though, I don't know if the new management team considered anything but his salary and the fact they had younger and cheaper options like Tanev, Sbisa and Stanton for the relative TOI.

David Booth's buy-out was as much predicated on the fact that he couldn't stay healthy as it was on anything else. But it was another salary dump. Though Nucks fans are almost certainly going to hate the play-driving forward's perceived "bounce-back" in Toronto, this move probably made sense regardless of whether you cast this off-season as a re-tool or rebuild. That bounce-back will only happen if he is able to take the ice, and it's too expensive to wait and see either way.

The aging Sedins (happy 34th, gentlemen) are still here. But let's face it...after a season seen as a bit of a cliff-jump production wise, their value has never been lower. And self-preservation dictates that you don't trade your once in a generation identical twin superstars in the first few months of your tenure. That can wait until next season...right? Instead, they picked up Radim Vrbata to re-tool the top line.

What happens in the first two months or so of this season, specifically in regards to the performance of the remaining core players, including the twins, the top D, and perform-or-change-zip-code candidate Alex Burrows, will ultimately determine whether this past summer was the start of a full-scale rebuild, or a savvy re-tool. I may be a bit bullish, but I have a sneaking suspicion that this is a playoff team. Everything coming out of Canucks camp tends to indicate that the new regime believes that the coaching change, veteran additions, and a renewed commitment from the remaining core will turn the page without requiring a gutting. And that might be the best route to future success anyway. There are plenty of examples of failing rebuild efforts taking years too long, as enticing as #McDiving for the 2015 draft may seem. See: Oilers, Edmonton.