Well that was fun! Followed the script from Tuesday's game against the Sharks, too: Withstand the initial barrage (Thank you, Eddie!), capitalize on your opportunities, then hang on to the lead. Led by Nick Bonino & Hunter Shinkaruk, the Canucks rattled off a 3-1 road win against the Flames. Let's do it again, shall we?

Share All sharing options for: GAME DAY: Canucks vs Flames

You have to give the Canucks this much credit: 2 games in (I don't count Stockton because there doesn't seem to be any evidence an actual game took place, just hearsay), they are a hell of a lot more entertaining than the Tortorella coached version last season.  While this kind of play is not going to be conducive to success (this whole withstand a truck-load of shots then make the most of your opportunities) is entertaining as hell to watch, winning this way is not sustainable. Tonight, with the Canucks icing a team that will look a lot more like the one they will start the season with, we can hope we see a team that's a little more dominate against their division rivals from Calgary.

Last night, Eddie Lack was once again stellar, stopping all 20 shots he faced in the 29+ minutes he played, and Joacim Eriksson was solid as well, turning aside 10 of 11. Strong games from Hunter Shinkaruk, who had his 2nd straight multi-point performance (at home in front of the family, no less) and a couple really sweet looking assists from Nick Bonino led the way. Shinkaruk, Bo Horvat and Nicklas Jensen are making it difficult for GMJB and coach Willie Desjardins to justify ice time for guys like Zack Kassian, Jannik Hansen and Tom Sestito with the way they're playing. And in the long standing tradition of hockey fans over-reacting to preseason games AND Canucks fans overreacting to everything... 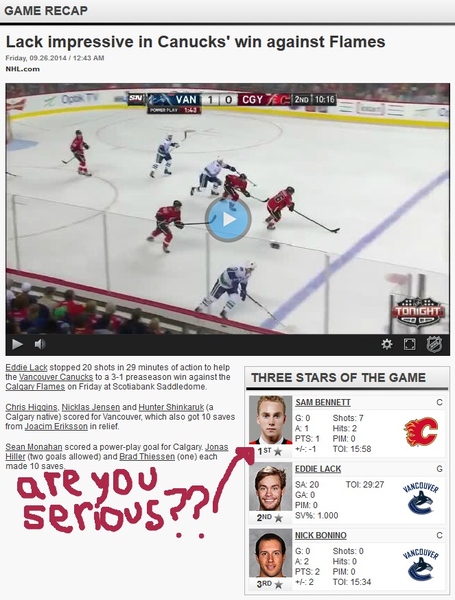 And that whole 'We are running with 3 goalies' comes to a screeching halt with word out of Vancouver that the Canucks have put Jacob Markstrom on waivers with the intent to move him down to Utica. Teams now have 24 hours to put in a claim on him, thus providing us with one more example of just how badly Mike Gillis destroyed this team. It will be a miracle if no one claims him. And as if the hockey world wanted one more reason to make Canucks fans freak out, Sestito was also placed on waivers. Tim, not Tom. Sorry, gang. Close, but not close enough. Also, this...

Tonight will mark Ryan Miller's Canucks debut, as long as we're on the topic of overreactions, so expect anything less than a shutout to see Canucks fans and everyone else to grabbing torch and pitchfork.

So a solid looking defence (that's pretty much their D this year, save for Edler) and a mish-mash of starters and eventual Utica-bound forwards will take on the Flames tonight at home on Daniel & Henrik Sedin's 34th birthday. Let's hope we see them kick it into high gear tonight with new linemate Radim Vrbata.

No shocker there with the Flames starting their #1 Jonas Hiller last night, though after a rather flat 2 goals on 12 shots performance, maybe they'd want to give him another shot at it after playing just 2 periods though. Should see Johnny Gaudreau in the lineup for the Flames tonight as well, and see if he can pick up where he left off in his last appearance in Rogers Arena in April when he scored his 1st career goal...

Florida death metal pioneers OBITUARY are back with a new album 'Inked In Blood' that will hit stores Oct 27th, and if this track is any indication, it's going to kick a whole lotta ass!