The Canucks have re-signed right-handed defenceman Yannick Weber to a 1-year, $850,000 contract. That is a $200,000 raise from last season. The 25 year-old Swiss scored 6 goals and 10 points in 49 games with the Canucks last season after being acquired as a free agent on July 5, 2013. He was a -7. Weber spent a bit of time on the Canucks' 4th line because you know, it was that kind of season.

-3 goals and 5 of his 10 points came on the power play. To give you an idea of how shitty the power play was, Garrison, Edler and Hank had 4 power play goals. Dank had 5 PPG's and Kesler led the team with 9.

-2 of his goals were game-winners.

-averaged 1:34 of power play time on ice per game.

-not used on the penalty kill.

-Yannick was one of 6 Canucks to score a shootout goal.

-Weber also represented Switzerland at the Olympics in Sochi.

Now we await the fate of Chris Tanev. Does he go to arbitration? If the Canucks sign Tanev, that would likely make Weber the 7th defenceman again.

His first goal as a Canuck came at a very opportune time:

The Canucks also re-signed goaltender Joe Cannata today. Cannata played in 28 games with the Utica Comets last season and earned an 11-12-1 record, 2.83 goals against average and a .907 save percentage. Joe was a 6th round pick by the Canucks in 2009.

Check out some of his work last season:

Here are the attendees: 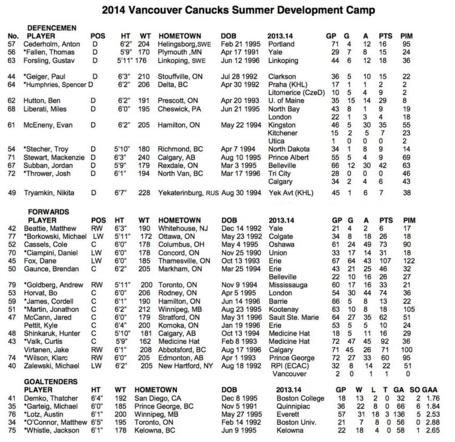 19 of those guys (I believe), are Canucks prospects. The rest are undrafted invites. Remember, Jake Virtanen just had shoulder surgery so his participation is limited.

Keep an eye on Daniel Wagner's work at Pass It To Bulis. He will be doing a lot of work profiling the attendees.