Look what happens. You take a break, start a new job, and all of the sudden, the Leafs are signing every ex Canuck they can, and every thing written in these dog days is both right and wrong. ( this one I especially liked from our PITB pals... ) Fear not. Change is good.

Share All sharing options for: Change ( The Good Kind )

I mean, it is the theme this year, right ?  With a new boss, another new boss, a new bench boss, new players, new chance ( s ) for the youth, and the last of the malcontent ( hopefully ) superstars that wanted out of town, well, out, change is busting out all over the place.

Where to start ?  Well, there is the aside of the Leafs ( the one time loudest proponents of "Olde Tymey Hawkey" ) hiring an analytics guy under the new leadership of Shanny, and Trevor Linden ditching the mind room, and looking at all the new regime "edge" things that Mike Gillis did ( and he should be commended.  There are teams all over the league that are doing the things he was first open to ) with a more player-ly eye.

The thing is, we could have told them a long time ago around here that David Booth was a good "analytics" signing.  In the end, he was a guy you could not have around at 4.2, but at 1.1 ( while still cashing a check next year from the Canucks for about 400 K more than that ), anything he does in Toronto will get ( hopefully, we know how the COTU puck media gets ) a positive reaction.  The headlines when his first hunting tweet hits social media could be fun too.

As an older fan, I have always welcomed the " baseballification " of hockey , to a point.  There are times when you can see the pressure of one team sending the Corsi Tracker spinning.  The numbers back up the results.  But there were times last year when, writing the away game reviews, I would mention how the Canucks were on the plus side of those numbers. Too often in the Lost Season, it was a period or two, and the other team ended up scoring two goals against the play or some such thing, but what the hell...

That the biggest market in the NHL just embraced analytics, and something that some fans have known about for a while now will now get embraced by the media ( I do look forward to the TSN Special about Mr Dubas, as told by Steve Simmons ) in that biggest media market.

Another thing for us to talk about is never a bad thing, right ? 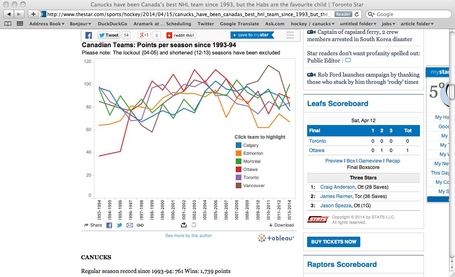 Which brings us back to the one time " best team in Canada " out here on the Left Coast.  The downfall of last season made Canuck Nation and our team easy pickings for those that enjoy that sort of thing.  The change that it brought about was inevitable.  The above is something I like to refer to, because it is so simple.  You can look at that drop off on the brown line, and the mountain of excellence that preceded it left no doubt whatsoever who was the best ( at least in the regular season ) team in Canada.

Montreal has claim to that title going into the next season, if only for the fact the green line is the only one going up  ( yeesh, birthplace of hockey ! ), and the strong play in the playoffs that they produced is what counts anyhow.  In the end, no amount of pointing to the mountain is going to matter if the ( albeit, historically, epically steep ) cliff's fall is what we focus on.

We fell. It hurts when you fall from such a height.  While there is always the chance that there will be stumbles and travails going forward, I choose to look at the season to come with more excitement than trepidation.  Why, let's take a look :

- I agree with Daniel Wagner in the PITB article linked above.  I like the Canuck lineup, if Bo Horvat can break into it.  But there should be no pressure on the teenager.  His GM has already said that going back would not be the worst thing, even if all Bo has ( rightly, I love that he wants to be here THIS year ) heard is what Coach Willie has told him.  There is a chance there.  How much of one is the question.  Might be nice to have a teen sensation for a change.  Oh yeah, and the other "#1 Pick Guy" Brendan Gaunce, while probably being AHL bound, is reported to have taken some big steps.

- Westy explored the role of Zack Kassian recently here, and with the deal he signed one of those "show me, and I'll show you the quan" deals, there is no doubt that we will have a motivated player.  It is funny with Kassian.  Coming to this market, he has done reasonably well under the microscope, and his game seems to be growing every year.  He was one of the best players on the team in the second half of the Lost Season, and with the chance to make his mark, and grab Top 6 ice time, it should be fun to watch the SassQuatch.

- New Guy I ; Nick Bonino.  He scored a little more than Ryan Kesler last year ( and yes, I am well aware of who each of them were playing with ), and as the main piece in the deal with the Ducks, there will be comparisons.  Hell, there is probably a segment of our many faceted fanbase who still wont blow out the candles on the KesLord alter.  But they are different players.  I like what I have heard about how smart of a player Bonino is, and how he makes his linemates better.  That seems to be a theme with the new guys at pivot this year.  What about whether he makes folks forget about Fraser Valley Wireless's favorite pitchman ("hey..." ) sooner, later, or not at all ?  That is why they play the games man.  Check his ExtraSkater page. I like the PDO jumping up 10 points in the playoffs the year before last, and the 6 point jump in the playoffs once again this past year. Nice...a guy who "brings it". At least he has THAT in common with the departed 'Lord.

- New Guy II ; Radim Vrbata. His ExtraSkater page tells a few tales too, but the one I will mention here is his ice time usage.  That 49.9 % of his teams' power play time that he was on the ice for last year may just go up, if he can spark the special teams.  Part of the new Third Twin's duties will be to help the Bottom 5 power play get back into the heights it once enjoyed, not too long ago.  He signed here for the chance to play with Daniel and Henrik Sedin, and he will certainly get that opportunity.  The power play may be where he makes his most immediate impact, while developing Wizardous Sedinerie chemistry to a heretofore never before seen Swedish - Czech stratosphere.  How can you not get at least a little bit excited by that ? ;-)

- The one guy that intrigues me the most may just be Linden Vey.  The Los Angeles Kings had no compunctions about trading in the division on that one though, did they ?They wanted the pick that Jim Benning had, and Linden Vey was going to start getting difficult to keep around, for a spot he probably would not see for years.  The business of sport.  For all of that, he definitely looks like he is ready to make the jump to the NHL, after dominating the AHL.  He was the part that made the best line in that league go, and helped Toffoli and Pearson make a jump he was blocked from making.  Now he has his chance to prove that he is an NHLer too.  It is certainly all htere on a platter for him, with a coach he knows, a GM willing to give him every chance to grab meaningful centre minutes in the Canuck lineup.  He has to earn it, of course.  But this is the guy that I want to see in that first preseason shift.

- I don't know about you, but my money is on Alexandre Burrows rekindling his relationship with Canuck Nation. Fickle bunch that they are, eh Burr'?  It certainly can't get worse !?

- The "other guy" in net from 2010.  Ryan Miller brings a high degree of goaltending that will help Eddie Lack as well.  Young goaltenders benefit from coaching, and Torts' schedule prevented Eddie from ever getting any of that last year.  Problem solved.

- A good old Saskey Boy from Kindersly, Derek Dorestt will facepunch all comers if need be, but if the playoffs just past were any indication ( and he alway has brought it, even in CBJ colours ), he can actually play hockey too.

- Chis Higgins, one of the best in the Lost Season.

- Jannik Hansen needs a bounce back season ( though the once just past was not without merit, to be sure ) .  Just get back to the simple game Honey Badger. Especially on the forecheck, on the third line, if you please Willie... ;-)

- Niklas Jensen.  The flashes of talent from him are tantalizing, and he certainly got chances from Torts a times.

- Shawn Matthias is certainly a great idea as the perfect, big bruising fourth line centre who can play some, but am I the only one that thinks we might see some of the surfeit of centres going forward being utilized on the wing ? Because dude can skate, and hit pretty damn good.

- Willie Desjardins, meet Brad Richardson.  Why yes, he did have his best season in years on a team that was in a historically shitty tailspin, and brought it every night, why do you ask ?

- When you are 6'5", and 228, and show the flashes of NHLness like Tom Sestito has ( not often enough ) teased us with, it is tough to let go. Especially when you are in a division with Hartley and the truculent Flambes.

You have Mike Zalewski, an unknown quantity to the new regime, eager to impress, and Dane Fox, who knows that the first impression is always the best one, and for a scorer like him, if he can rip a few top corner early in the preseason, his impression on the fanbase and management could force him into a spot.  ( both GMMG guys, FWIW )

A restocked system of prospects that may even get us Top 20 with those guys at Hockey Futures, full of stories and promise.  Plus, the chance that Jim Benning still has a bullet or two in the chamber, if need be, or if teams are looking to move for the variety of reasons they always are as the season nears and the final Cap "I's" and "T's" need to be crossed.

That is just the forwards. Next time, a few thoughts on the changes the defense and goaltending has had.  Until then, you earned it, so here...enjoy.  The very best thing about the Eighties...I highly encourage you to just keep clicking the next one along.