The Canucks have signed forwards Darren Archibald and Brandon DeFazio. Via The Score:

Archibald, 24, appeared in 16 regular season games for the Vancouver Canucks in the 2013-14 season, recording three points (one goal, two assists).

Couldn't be more excited to be back with the @VanCanucks , thanks everyone for the kind messages!

Very excited to be a part of the @VanCanucks organization for another season.

Archibald is fighting for the 4th line duties on the Canucks. Check out his first NHL goal scored last season:

The Maple Leafs hired an advanced stats guru named Kyle Dubas as assistant general manager (rage, Steve Simmons, rage!) and then signed Canucks castaway David Booth. The deal is a 1-year contract worth $1.1 million. Yes that is a good deal.

The Canucks bought out the final year of Booth's contract this summer and will pay him $1,583,333 per season for the next 2 years, according to Capgeek.

For the 3rd time, Booth joins Mike Santorelli on the same team. They have chemistry dating back to the Florida Panthers days when Booth had a career year in 2008-09 (31 goals, 60 points.)

Back to the advanced stats. Booth's tenure in Vancouver is worth forgetting. Last season he scored 9 goals and 19 points in 66 games. He was often injured and benched. But a few of his advanced stats show he's not all bad. He was tops on the team with save percentage while on the ice. His PDO was high. 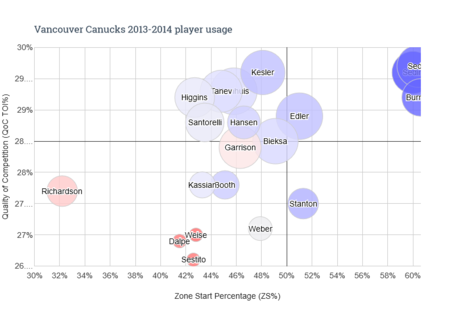 More of his advanced stats can be seen here at ExtraSkater.com.

-Booth's +1 ranked him 3rd on the team amongst the forwards.

-I can appreciate 18 penalty minutes in 66 games played.

-Booth was not used in shorthanded situations.

I'm still a dinosaur with the advanced stats stuff, it's no secret. But, with the hiring of Dubas in the Center Of The Universe and hearing it more and more on NHL talk shows and reading it in articles, I'm going to have to adapt or become extinct.

The baseballification of hockey is hugely upon us now.

This is basically the cast of Moneyball with Shanahan as Brad Pitt, Dubas as Jonah Hill and Carlyle as Philip Seymour Hoffman.

So if the Leafs suck, they will now have more detailed excuses, right? And if hey kick ass...HOORAY FOR ADVANCED STATS!

Anyway, Bargain Bin Dave Nonis strikes again. I'm sure Santorelli is going to be good for T.O., but Booth is a really big question mark. If he can stay healthy, he should make some noise for the Leafs, and I don't mean the bang of a 12-guage shotgun, necessarily. Oh, the fans and media are gonna eat this poor guy for dinner.