This open thread will be the game thread for all games in the Finals. If the comments section gets too full, I will make another thread!

All games televised on CBC, NBC and RDS

-13 of 15 NHL.com peeps/pros are picking the Kings to win this series.

It would be an upset if the Rangers won the series but a seven-game series, if otherwise close, can easily be decided by goaltending and, right now, it's not unreasonable to hold higher expectations for Lundqvist. Let's see if King Henrik can get the job done.

You won't see a "C'' on a blue shirt this series. If the Rangers win the Stanley Cup, they don't have a captain to raise it after trading Ryan Callahan in March. That role is being played unofficially by Brad Richards, a healthy scratch in last season's playoffs and a potential salary-cap casualty this summer.

-Violence! Big hits and physical series, lots of between the whistle bru-ha-ha.

-Hey Nash and Richards: step up and earn your big $$$ contracts

-Lundqvist is better than Quick

-The Kings never quit, and have made their lives hell getting to the Finals. Fatigue factor given that and their wars leading to the Finals? I swear the Rangers have had it "easier".

-The Martin St. Louis and mates rallying around his wounded soul from the death of his mother storyline. It's a beauty. These guys go to war for each other.

-Will the Kings' goals-for average plummet against the Rangers?

-Lots of 1994 references for the Rangers-Canucks finals. Gag!

F*** Twitter and all the celebrities attached to it.

Against all odds, Rangers take it in 6. GAG!

(Frothing at the mouth rant from Yankee Canuck is as follows)

My fellow cohort has had his say. As I hike up my pants and ready the hose to ward off those damn kids near my precious lawn - my Yellow Trilliums are coming in beautifully, thank you - I must chime in with an equally discerning declaration:

Rot in the fiery depths of hell New York

Right off the top, you did this and this. I hate that numbers we hang from our rafters are sullied by your crest.

That 's an ideal segue to another rafter hanger who you did this too. An apology wouldn't kill. Meanwhile you still drop to your knees in praise of this "man" who five seconds later did this which caused this and this by which point your "man" scurried home for a stupid photo op and, through more tears, promised you another Cup which eventually looked like this. Occasionally he'll crawl out from underneath is rock to look like this. Congratulations.

Oh, you fell assbackwards into the only player that got you this far? Makes perfect sense.

You deserve no sympathy, no adulation and certainly no support. You're the Boston Bruins without the talent or earned swagger (and you're damned lucky you escaped without playing them too). You've made us Kings fans - of which we are not - that is just the sour lime chaser to the rotten tequila shot that was the 2013-14 Vancouver Canucks season. 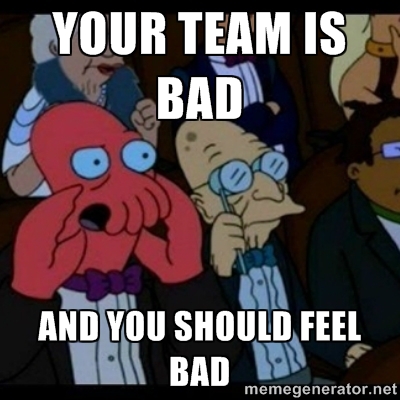 Give us John Stevens.

And end this horrible season immediately.