Gazing from my window to the streets below, On a freshly fallen silent shroud of snow. I am a rock, I am an island. I am the Hammer.

Born: December 13, 1982 in Smithers, BC. Fun fact: did you know Smithers sucks? #trollololol

Drafted in the first round (12th overall) of the 2001 NHL Entry Draft by the Nashville Predators, four slots before Vancouver's selection of R. J. Umberger. Yes you can continue to laugh at that.

Guys like Hamhuis are what give you a sigh of relief in most games. Sure Edler's league-worst -39 was one end of the spectrum but Hamhuis - who played basically 60% of his shifts with Christopher Tanev - anchored the pairing you could trust the most. I talk more about that in the next section so I'll focus on offense here. Certainly not a goalscorer (his career high is seven) Hammer would rattle off four before December. Though scoreless in the final month of 2013, he added six assists before the new year and tacked on a +7 to boot. It's also noteworthy that December was when Edler was sidelined and Hammer saw an increase across the board in his assignments.

In early January he earned his first Team Canada nod with that gold medal being the highlight of his season. Back on the ranch, the Canucks hit the skids and so too did Hamhuis' contributions on the offensive side. Defensively speaking though, he and Tanev continued to be thrown to the wolves on nightly basis. He'd get back on the scoring side of life in March with five points (1G, 4A) and ended the season in April with two more helpers, but again, he's the #1 shutdown guy on a team that got largely pummeled on most nights. As you'll see below, he performed quite well defensively despite the chaos around him.

Check out this usage chart , courtesy of ExtraSkater.com. The Y axis shows quality of competition, so the higher up you are, the tough assignments you got. The X axis is the zone starts, so the more blue you are the more choice offensive assignments you received. 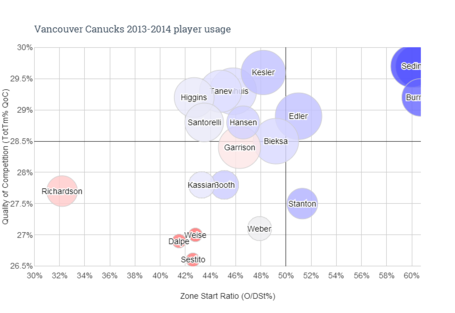 You'll note Hamhuis and Tanev are side by side as the pairing seeing the harder assignments (each had a TotTm% QoC of 29.3%, leading all blueliners) with less advantageous zone starts (Hamhuis' O/D st% was 45.8, Tanev's was 44.8). Kesler and, to a lesser extent, Higgins are there as well, two players who also draw similar parallels in what role they play. No matter what happens during this roster overhaul, the Canucks still need those gritty pieces who commit to the unsexy stuff like, you know, stop the best players on the other team. That's where Hammer's true value is: away from the offensive side of the game, shutting down the top talent on the opposition.

Turning back to that QoC, 29.3% puts Hammer (and Tanev) at the same level as how the Wild used Ryan Suter, the Pens used Brooks Orpik and the Sharks used Marc-Edouard Vlasic (the guy whose injury was rather noticeable in their game seven loss). It's even slightly higher than Drew Doughty and Erik Karlsson. It's quite close to Norris Trophy candidate Shea Weber (29.6%) and Norris Trophy candidate Zdeno Chara (29.9%) levels. Weber and Chara are obviously much more well-rounded players than Hamhuis, but the fact you can toss his name around with the elites is a reminder of his importance.

Also important: Hamhuis played 79 games, second only to Jason Garrison on the team. Whereas Garrison's play left much to be desired, Hammer stepped up in Edler's absence and didn't miss a step. Durability seems to plague this squad, but Hamhuis continues to find a way to play strong without frequent trips to the ER.

Overall, Hamhuis consistently provides the best defense on the team. Ditto young Mr. Tanev who should be signed long-term this summer for that very reason.

Cool. So what did we hate?

Would you like more offense from him? Sure, but that's not why he's employed. There's a ton of blame to go around this team after 2013-14, but Hamhuis is one of the rare exceptions.

Hamhuis will be 33 years old and a UFA at the end of the 2016 season. He's a prime candidate to re-up before then, but should the new regime want to start shedding salary, he could be an intriguing trade asset should he waive his NTC. Then again that assumes this team is still struggling two seasons from now in which case he (and others!) may want a change of scenery anyway.

A more likely scenario is the new GM and coach see immense value in keeping Hammer and Tanev (as a pairing or with new linemates) for the foreseeable future, similar to what the Kings did a few years ago when they kept older guys like Mitchell or Scuderi to help foster Doughty (ugh) or Voynov.

As bad as this season was, it would have been Buffalo-esque had Hammer not been available and that's his value in a nutshell. Quietly, he's the best blueliner the franchise has heading into the fall.