I received an email from secondary ticket marketplace Vivid Seats showing me a list of median /average ticket prices from last season and this season for every NHL team. Normally I don't like to promote this kind of stuff here but when a company sends me a bunch of cool data like this and allows me to share it with all of you I can make an exception. I think you will be surprised by some of the numbers. 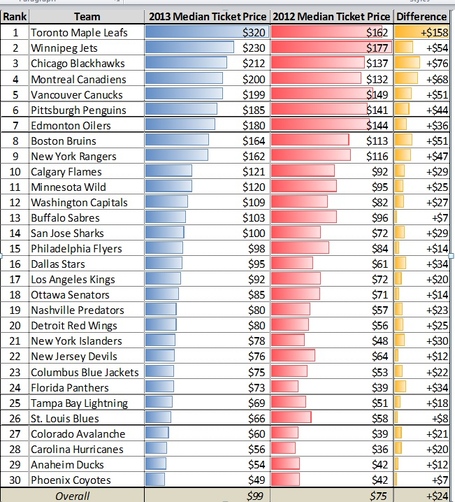 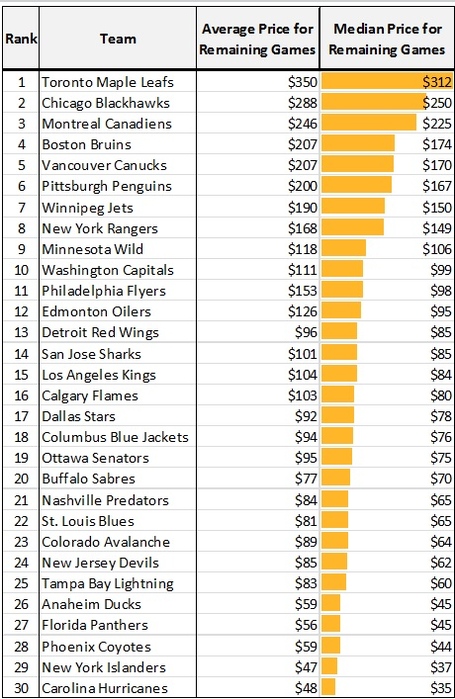 "Average" and "Median". I had to look that stuff up. Check out the difference here. St. Louis Blues and Anaheim Ducks fans are really getting a lot of bang for their buck this season hey? Buffalo Sabres and especially Edmonton Oilers fans...not so much.

Are you a season ticket holder? How many games do you go to in a season? Finding Canucks tickets to be outrageously high? OK, that last question was rhetorical. I am one of those ***holes that has received corporate tickets through work for almost all of the games I have ever been to (about 7). Yay!

The Globe And Mail writes that the Canucks' sellout streak of about 470 games, could be in jeopardy. That sellout streak by the way is the longest in the NHL and the second longest streak in North American pro sports. More from that article:

The run of success in the past decade on and off the ice has made the Canucks one of the richest and most valuable teams in hockey but now the box office is a challenge just as costs are climbing, the salary cap rising and the Canadian dollar falling. There are cracks elsewhere, too: Regional television ratings are slipping, down about 10 per cent.

At last week’s home game against Nashville, upwards of a thousand tickets in the lower bowl of Rogers Arena were empty, as ticket holders either couldn’t or didn’t bother to sell their tickets, or give them away. In the secondary resale market, prices have fallen by half and fewer tickets are being sold, according to Mario Livich, president of ShowTime Tickets. Prime tickets behind the players benches can be had for $100 for some games, he said.

“There are all kinds of crazy deals,” Livich said.

Season tickets and packages account for most of the seats each night, about 17,000, and there is an estimated 5,000-plus who are on a waiting list.

During the sellout streak, the Canucks have had most customers stay on, with an average season ticket renewal of about 96 per cent. For 2014-15, they will have to be “smart and lucky” to get 90 per cent of customers to renew, said Tom Mayenknecht, a sports business analyst and host of The Sport Market on TSN Radio.

“The disappointment and fan fatigue is palpable,” said Mayenknecht, himself a season-ticket holder. “For the first time in more than a decade a lot of season ticket holders are not sure what they’re going to do.”

Thanks to Vivid Seats for the charts, and no I did not get free tix for posting this. I probably should have. Never was a good salesman.

View their available tickets for upcoming Canucks home games here. Gad, this linky love is making me ill. I think some free tickets will make me feel a hell of a lot better, vividseats.com. Hook me up, @VividSeats!