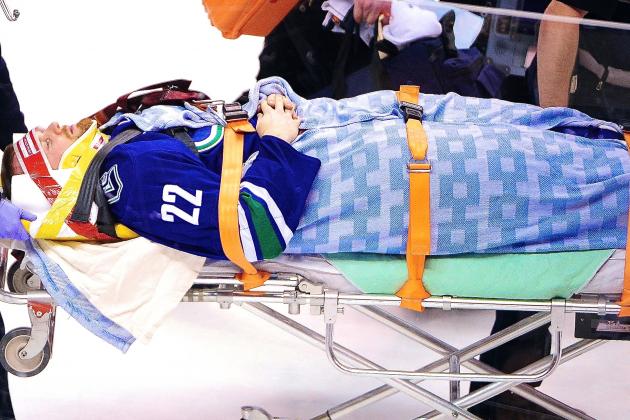 Daniel Sedin being stretchered off after an overly enthusiastic hit last season.

When I was 12 years old I was playing Rugby diving into a ruck my head made contact with a team mates foot, three days later I woke up. I still live with the consequences of this injury (epilepsy, short term memory loss) and whenever I see contact to the head in any sport I get a feeling in my gut.

This year we've seen Burrows banned for an Illegal Check to the Head which I personally had no issue with, however as a cricket supporter the events of the past week have left me with some food for thought, specifically what is the boundary in any sport.

For those that missed it, promising Australian batsman Phillip Hughes was playing a domestic cricket match and got hit in the neck by a ball traveling at 135 kmh. This compressed an artery in his neck and there was no coming back from it then – he was given a death sentence.

This brings me back to the purpose of this, I know this is a freak occurrence however what we need to consider is that in sport is enough being done to protect players in avoidable situations.

The way I see it is that the NHL currently punishes the injury not the crime and until a player gets seriously injured (and I’m talking fucked up for months on end) the Illegal Check to the Head won’t stop happening. So far there have been five suspensions for this with the longest being the Rangers John Moore whilst in 2013-2014 there were 14 suspensions out of 44 total with Kaleta picking up 10 games for his effort on Johnson

Given the conversations around the NFL and recent ruling regarding concussion (and the laughably organised attempt to sue the NHL) what lessons can the NHL learn from other sports?

The NRL for example in Australia used to punish the injury not the crime and have since shifted to the crime not the injury. When this was first introduced the number of suspensions jumped as the punishments were normalised and with the exception of the WHAT THE FUCK moments that occasionally happen the numbers for the NRL’s equivalent to the NHL has been dropping.

I firmly believe that when this happens it will stop pretty quickly as the hitting player will take a greater responsibility for their actions.

Don’t get me wrong I enjoy a big hit as much as the next guy (after review the hit by Comeau on Horvat was nicely done and an attempt to get the Pens back into the game).