Canucks attempt to crush Kesler's quack and get Bonino's back.

I think everyone had this one marked on their calendar for various reasons. Maybe it was because of Ryan Kesler. Maybe it was to see how Nick Bonino and Luca Sbisa will do in their return to Anaheim. Or maybe just because this is a matchup between two of the early season points leaders in the Western Conference. Whatever the reason, it is safe to say that this should prove to be an exciting matchup between two very capable teams.

I'm not going to go too far into the Bonino vs Kesler comparison. Zan handled that fine. I just want to add this little nugget:

Games are won and lost at even strength. Needless to say, Bonino has been stellar there, and ruined a great many narratives as a result. I anticipate that despite his high shooting percentage, his early season success will continue. Why? Because he has always shot at an inflated percentage. He is an opportunistic scorer who does not shoot for volume, but picks and chooses his opportunity. And when he does...his wrist shot is...not so bad:

Vancouver probably could not have picked a better time to visit Anaheim. While Vancouver will be without Zach Kassian and Derek Dorsett (hip), Anaheim is, put simply, very shorthanded. Currently out with injuries/illness: NHL goal scoring leader and ultimate agitator (seriously, watch those, they are hilarious) Corey Perry (flu), Francois Beauchemin (flu) Ben Lovejoy (broken finger), Mark Fistric (back), John Gibson (groin), Kyle Palmieri (ankle). Cam Fowler may be a game-time decision as well. Back in, however, is the Great Dane, Frederik Andersen, who had previously missed several games due to injury.

Which brings me to a key storyline:

Yes, Ryan Miller has 10 wins and just 2 losses. But his even strength numbers (see above) aren't up to NHL average standards. That said, most of it is just small sample size impact of two games, Dallas and last night at Los Angeles. He has, by and large, been quite consistently good. The question is, how will he do on a back-to-back? He sat out the 3rd last night, so I guess 5 periods is better than 6? Even still, goalies traditionally don't prove to do well on short rest. Here, take a look at how goalies did by days of rest in the 2013-14 season:

Or, if you prefer graphs: 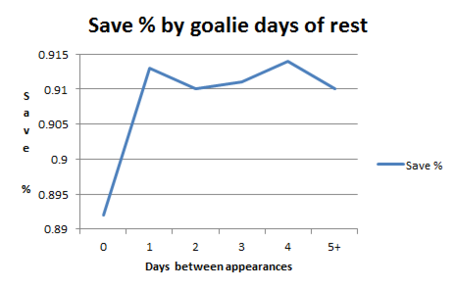 Meanwhile, Freddy Andersen has been nothing short of absolutely spectacular to start the season. However, he has missed a few games. Hope for rust. When this kid is on, he saves Anaheim's bacon and makes their defense look stellar. Their defense is not stellar.

Key to the Game:

Forcing Anaheim to stick with their dump and chase type attack will be important. The fact is that one of their top play-drivers is out, and it leaves Getzlaf one wheel short on the cycle, even if they recover the puck. And Kesler isn't a cycle pro, he wants to get his rush slot scoring chances and let his wrister go. Force decisions in neutral ice so that Anaheim gets stuck in a dump and chase cycle, which has not been as prosperous for them as in past seasons (great article by @kid_ish on goal tracking, you should read it).

This is a team that does great on the rush, as do many teams. So don't allow them to. Force more of what their coach preaches anyway and take advantage of their skill-depleted lineup.

Secondarily, if they are shorthanded on the blue line, it will be important to force some of their slower-footed D getting inflated even strength minutes to move. That means carrying the zone with speed, and pressing their gap control. Josh Manson (an AHLer), Bryan Allen and Clayton Stoner can be had. So have them. Stoner is going to be getting a lot of time, and takes bad penalties. Make him tired and he will oblige.

Anything off of Japandroid's "Celebration Rock." My favorite Canadian rock band, and we are gonna celebrate tonight! "Tell 'em all to go to hell!"

In honor of our Cali road trip, which will assuredly end successfully, some delicious Cali beer. Grab something from Russian River Brewing on your way back to Vancouver:

- 1 Drink: Mention of the Kesler-Bonino trade (get a few beers ready)

- 2 Drinks: Mention of Brandon DeFazio being called up from Utica

- 3 Drinks: Shot of Bruce Boudreau beat red in the face

-3 Drinks: Broadcaster overreacts over a play/point by Kesler

I don't know...Kent will update or I will soon. I so sorry:

Tack your scores in the comments homies.