The Canucks POTW is a weekly feature that breaks down the best play from the past seven days. This week: Ryan Kesler scores on a diving wrist-shot vs. the LA Kings.

Share All sharing options for: Canucks POTW: Kesler's diving goal vs. the Kings 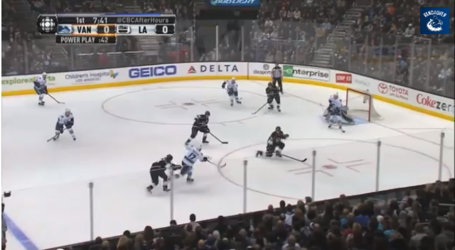 After some nice work along the boards and to work the puck back to the point, Kesler starts the play off by firing this shot towards the net. However, the Kings defender blocks the shot, and it ricochets to the left corner. As Kesler shoots, he is being back-checked/hooked by the Kings' Justin Williams (#14). Williams actually loses his stick on this play, as Kesler's shot knocks it out of his hands. 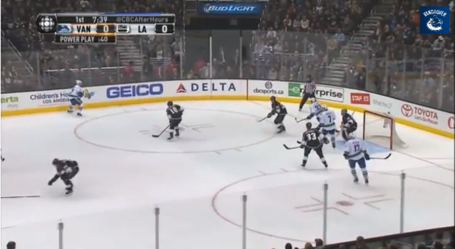 Daniel Sedin collects the puck along the boards and looks to pass to Henrik. Note that Williams has had to leave the play to collect his loose stick. 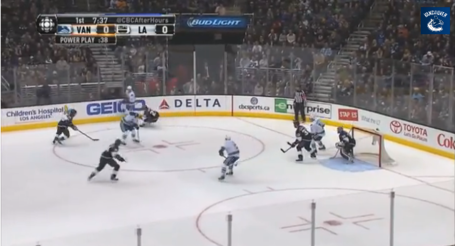 Daniel makes a little pass to Henrik, and then immediately works the give n' go by moving into open space between Kings' defenders. David Booth is doing good work near the Kings' net to keep the one of the defenders occupied, meaning that Kesler has room in the slot. However, Williams has done well to hustle back into the play and is looking to prevent the pass from Daniel to Kesler... 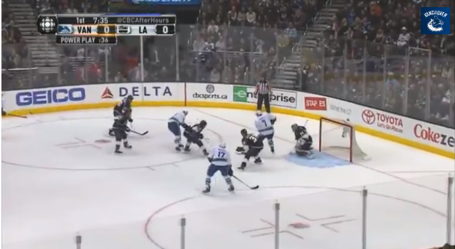 ... but Williams cannot get to Daniel in time to prevent the pass - the slight delay caused by losing his stick makes just enough of a difference that the Canucks can get this play off. Daniel makes a really nice little pass, reaching around Williams to find a lane to Kesler. 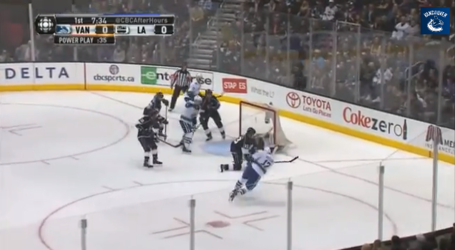 And then Kesler does this! He has to reach for the pass, fully extending himself from two skates to one and then launching himself into the air as he shoots. He amazingly puts the puck top shelf, over a very mobile Jonathan Quick, who has moved across well to cover the lower half of the net. Kesler is known around the league for diving (though seems to have largely curtailed that aspect of his game) - but in this instance his dive is a thing of beauty and helps him score a remarkably athletic goal.

It was a lousy week for the Canucks, as they departed 2013 and rang in 2014 by losing four straight games, and securing just two out a possible eight points. There were some pretty goals during that stretch, to be sure, including nice scores by Jannik Hansen vs. the Flyers and Zac Dalpe vs. the Lightning. Kesler's goal gets the nod for the POTW due to his athleticism and wicked wrist shot - that's it, there wasn't too much else to cheer about last week. Hopefully the team turns it around in the coming week, but with games against the Penguins and Blues, the next week will be tough.