The Canucks POTW is a weekly feature that breaks down the best play from the past seven days. This week: Zack Kassian scores a beauty vs. the Penguins.

The play (with a bonus Chris Higgins goal included!): 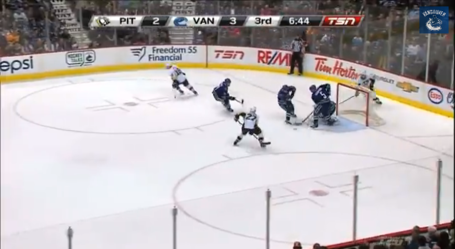 Bieksa, who picked up the second assist on the goal, starts the play by clearing the puck from danger in front of Eddie Lack. 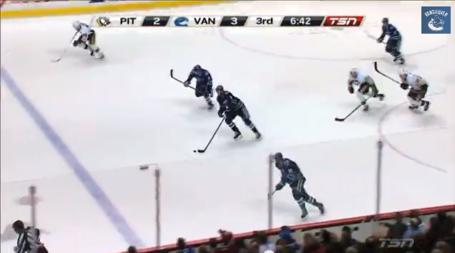 As Kassian leads the charge out of the zone, the Penguins are in pretty good shape defensively. While two forwards are caught deep, the far winger is hustling back and (offscreen) the two defenders are in position to defend the rush. Right now, this doesn't look too threatening. 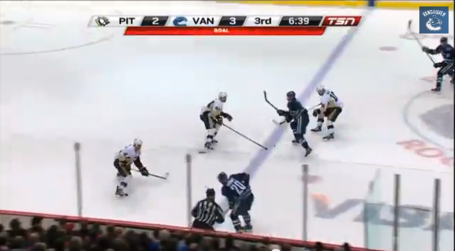 Higgins leads the Canucks into the zone after taking a pass from Kassian. Unless Higgins can squeak a pass through to open ice for the far winger, the shouldn't be much opportunity here for a quality scoring chance - the Pens have Higgins well covered and Kassian double-teamed. 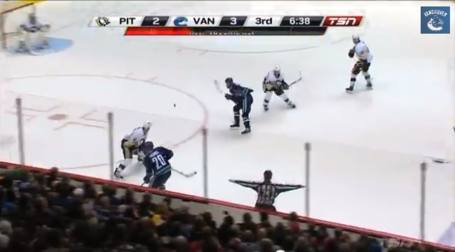 But suddenly, Kassian makes a nice move to get past his defender while the other defender drifts out wide, assuming his teammate has Kassian covered. But Higgins is still well covered, so he flips a desperate pass over the defender's stick to the onrushing Kassian. 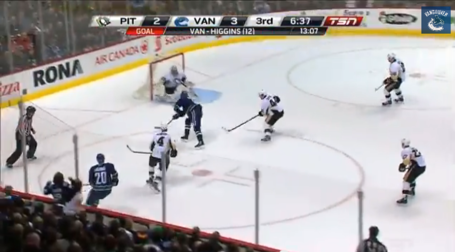 Kassian does extremely well to corral the puck and get it to the ice on his stick. By doing so, he gives himself a scoring chance - although given how tight he is to the net, the speed at which he is moving, and the positioning of Marc-Andre Fleury, a goal still seems unlikely. Even if he didn't score, this would be an impressive bit of stickwork... 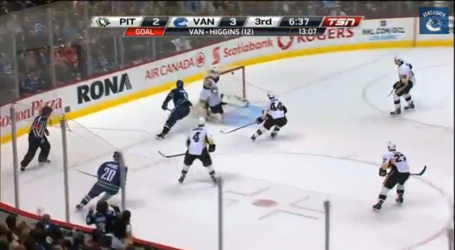 ... BUT, Kassian does score! The big winger lifts a perfect backhand up and over Fleury, finding the top shelf of the net. The combination of controlling the aerial pass and going backhand shelf on Fleury makes this quite an impressive play from Zack Kassian.

This goal should have been the exclamation point on an impressive comeback victory over the Penguins. The team was down 2-0 and stormed back with four goals, Kassian's appearing to be the insurance marker for the Canucks. Unfortunately that didn't pan out, as Pittsburgh scored twice in the final 1:11 of the period and ultimately won in a shootout.

That being said, Kassian's goal was key in staking the Canucks to a lead and should have been enough to get them the 2 points. When he shows flashes like this, Kassian has such a tantalizing potential to be a force in the NHL. Hopefully Coach Torts can continue to work with him to improve his game, as a strong third-line (anchored by the like of Kassian, Higgins, Hansen, etc.) will likely prove key if the team is to go anywhere in the playoffs.

Thankfully the Canucks finished their week on a positive note, beating the St. Louis Blues 2-1 on Friday. 3/4 points against two excellent teams is nothing to be ashamed of, but that Penguins loss will sting for a while. This week the Canucks schedule doesn't get any easier, as they face four divisional opponents - including the Kings, Ducks and Coyotes (oh yeah, and the Flames). These could be key games for movement within the divisional standings, so hopefully the team continues its strong play from last week and shows up to play this week.