#2 on the list of the top Canucks seasons: 1993-94. Another Cinderella playoff run takes the Canucks to the Stanley Cup Final for just the second time in the franchise's existence, where they lose in an agonizing Game 7 after battling back from a 3-1 series deficit. Players like Trevor Linden, Kirk Mclean and Pavel Bure deliver star performances while a supporting cast of players like Greg Adams, Geoff Courtnall, and Cliff Ronning cement their place in Canucks lore. The playoff run lives on as one of the greatest moments in Canucks history.

After a hiatus, I am back to counting down the Top 10 Canucks seasons of all-time. The list is based on a combination of team success and the significance of the season to the Canucks' history. The list was arbitrarily made by me, so feel free to share your own thoughts and debate my selections in the comments section. See the bottom of this post for links to the previous seasons in the Top 10.

Before discussing the 1993-94 season, I feel the need to briefly acknowledge that this season coming in at #2, instead of #1, may rankle some people. At this point I am choosing between two seasons that are both profoundly significant in Canucks history and that will resonate powerfully for fans in different ways. My selections for this list have been based on a subjective combination of greatness, significance to club history, and place in fans' collectives memories. Few Canucks fans would disagree that the three Cup Finals appearances by the team (1981-82, 1993-94, and 2010-11) merit selection as the franchise's top three seasons of all time. While some might place 1981-82 higher than #3, I feel that the majority of fans are comfortable with its ranking.

However, comparing 1993-94 and 2010-11 is a complicated business, as the two seasons both saw the Canucks reach the seventh game of the Stanley Cup Final, albeit in very different fashions. Ultimately, and I will explain this in much more depth in my next post, the 2010-11 season was overall a more excellent one than 1993-94 - and thus it gets the nod. That being said, 1993-94 was a foundational season for many Canucks fans (myself included) and, in part due to the Cinderella nature of the Cup Finals appearance, featured an arguably more epic playoff run.

So, rather than debate the various merits of the two seasons, I would prefer instead to celebrate them both for their amazing moments and their lingering impact on the collective memory of Canucks fans. So, without further ado, let's travel back to 1993-94 and relive that amazing Canucks season.

Aside from a spectacular season by Pavel Bure, in which he notched his second consecutive 60 goal season and finished with 107 points, the Canucks' regular season was nothing particularly exceptional. The team finished one game about .500, and 12 points back of division leader Calgary Flames. This was the first season that the NHL had Western and Eastern Conferences (previously Campbell and Wales, respectively) and that teams were seeded for the playoffs in their conferences, rather than in their divisions. As a result, the Canucks (7th seed) would face the Flames (2nd seed) in the first round of the playoffs. Under the previous format, they would have faced the San Jose Sharks and the Flames would have played the Mighty Ducks of Anaheim.

Prior to the season, forward Petr Nedved held out for more money from the Canucks (random trivia: during his holdout, the Czech took advantage of his recently acquired Canadian citizenship and played for Canada at the 1994 Olympics). This set in motion a complicated chain of events that would turn out very fortuitously for the Canucks. In March, the St. Louis signed Nedved to a contract. As per league rules at the time, an arbitrator was brought in to determine appropriate compensation for this signing, and the Canucks were awarded Craig Janney and a second round draft pick. Janney, however, refused to report to the Canucks and a week later Vancouver traded him back to St. Louis for Jeff Brown, Bret Hedican, and Nathan Lafayette. All three would be major contributors to the Canucks' playoff run, with Brown in particular becoming a key cog on the team. During the season, the Canucks also traded for Jimmy Carson and Robert Dirk.

The Canucks entered the playoffs as a large underdog to the Flames, and the first four games did nothing to dispel this notion. Although the team stunned the Flames with a 5-0 win in Game 1, the next three games saw the Flames claim wins of 7-5, 4-2, and 3-2. Despite facing elimination, the Canucks kept battling - and, in doing so, wrote one of the most epic scripts in the team's history. The Canucks won Game 5 2-1 in overtime and then evened the series in another overtime game, this one a 3-2 score. Geoff Courtnall provided the heroics in Game 5 on a wicked slap shot from the wing and captain Trevor Linden stepped up and won it in Game 6:

So the teams travelled back to Calgary to play for a trip to the second round. With the Flames leading the game 3-2 with less than four minutes remaining in the third period, things looked dire for the Canucks. Then Greg Adams scored a hugely clutch goal to tie the game and send the third straight game to OT. In the first overtime period the Flames looked like they would crush the Canucks hopes of a comeback when they appeared to have a sure goal off the stick of Robert Reichel - instead, however, Kirk Mclean made an all-time amazing save and what is surely one of the top plays in Canucks history:

Mclean's great goaltending kept the Canucks alive, and set the stage for another all-time Canucks moment in second overtime, when Jeff Brown sprung Pavel Bure on a breakaway for the game-winning goal. Here is Jim Robson with the timeless call:

And here is a longer clip from the CBC broadcast, featuring post-game interviews by a much younger Ron Maclean:

The Canucks kept the momentum going after the epic win over the Flames, rolling through the Dallas Stars in Round 2 and the Toronto Maple Leafs in Round 3 - each series only lasting five games. The Canucks clinched their second ever conference championship on this double OT goal by Greg Adams (an all-time legendary call by Jim Robson):

And with that goal, the Canucks were on to only the franchise's second Stanley Cup Final appearance ever. Much like their previous appearance in 1982, they faced the reigning President's Trophy winner from New York - however, this time the opponent was the Rangers rather than the Islanders. The Rangers entered the series coming off a dramatic Game 7 victory in double overtime over the New Jersey Devils. The team put up 112 points in the regular season (52-24-8), 27 more than the Canucks. Needless to say the Canucks were massive underdogs.

The 1994 playoff run was deeply personal for me, so it is a little painful to revisit despite some of the amazing moments. So apologies if this section skims over some of the more painful moments (Bure's penalty shot, Messier's douchebaggery to Linden, all of Game 7, the riot). Let's remember the good times, shall we folks?

Despite being underdogs, some magic happened in Game 1. With the Rangers leading 2-1 in the third period, Martin Gelinas scored to tie the game with just a minute remaining. In the extra frame, the Rangers peppered the Canucks goal, but Kirk Mclean held his ground and made save after save to keep the game alive - he would finish with 52 saves on the night. Then, on a dramatic sequence, the Rangers' Brian Leetch hit the cross bar, the Canucks broke out of the zone for a 2-on-1, and overtime hero Greg Adams ended his second straight playoff game in overtime:

Suddenly, the Canucks and their fans had hope. The team had defied the odds to come this far. Why not win one more upset series? But then the Rangers stormed back to take the next three games, and suddenly the Game 1 upset looked like an aberration. But this Canucks team would not go down without a fight.

Game 5 was extremely memorable for me, as my brother and I watched the game on big screens at the Pacific Coliseum (for a $5 donation to the food bank). The game was epic, with the Canucks storming to a 3-0 lead, blowing it as the Rangers tied the game in the third period, and then scoring three more times to seal the win. Dave Babych, of all people, got the goal that regained the lead and swung the momentum back in the Canucks' favour. Those who doubt Pavel Bure's passion in this series (cough, Don Cherry, cough) should check out his jubilant reaction after Babych scored:

After the victory, ecstatic fans at the Coliseum jumped the glass and milled about on the ice, hugging and whooping as they celebrated the win, as the thin security force just looked on helplessly. My brother and I, along with a crowd of dozens, got our picture in The Province showing us as we left the ice through the zamboni door. Outside the arena cars honked their horns and fans high fived drivers or climbed on bus stop roofs. It is an all-time favourite memory in my 25 years of Canucks fandom.

In Game 6, the Canucks stormed out on home ice and took a 4-1 victory. The game featured a bizarre sequence in which Geoff Courtnall, with just over a minute to play, scored a goal that immediately bounced out of the net and was not counted. The Rangers countered and, eventually, put the puck behind Kirk Mclean. Video review eventually confirmed that Courtnall's goal was good, meaning the Canucks led 4-1 instead of 3-2. Sean has written a post about that goal - I suggest you check it out! Following the game, an exhausted and battered (thanks Messier) Trevor Linden hugged Mclean, and the image has become the all-time greatest image in Canucks history: 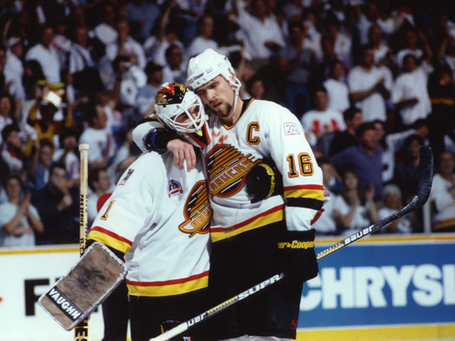 On to Game 7. Unfortunately for the Canucks, who had all the momentum and who were the younger squad, an extra day's break was scheduled between Games 6 and 7. This seemingly benefited the Rangers. Who knows how Game 7 might have gone if it was played 48 hours after Game 6, instead of 72 hours?

Regardless, the Rangers triumphed in the climactic game by a score of 3-2. No need to go over the details except to say that Linden played an epic, clutch, all-time amazing game for the Canucks (he scored both Canucks goals) - I think this would be more widely acknowledged as his greatest game if the memory of it were not so painful for fans. Also, a post was hit late in the third period. But them's the breaks, I suppose.

The 1994 playoff run was an amazing moment for the Canucks. It cemented the franchise legacy of excellent players like Linden, Mclean and Bure, and pushed lesser players into the annals of Canucks lore: players like Adams, Ronning, Courtnall, Lumme, and Brown are all remembered fondly by fans old enough to remember '94. The playoff run held out the tantalizing promise of extended playoff success, but the team would regress in following seasons before entering the dark ages known as the Keenan/Messier era. The 1994 Canucks team, while a good squad, played over their heads and caught lightning in a bottle at the right time.

Yet, for those two months, the Canucks captivated an entire city, province, and fan-base with their outstanding performances. For fans whose passions were sparked by the 1982 Cup Final run, 1994 offered another taste of playoff success. For younger fans like myself, it validated our choice of team and favourite players and cemented our fandom for life. For others, who had never taken much interest in hockey or in the Canucks, it offered an entry point to fandom - and, for certain, won the Canucks some lifelong fans.