Now that the awe and thrill of the America's Cup is over (just nod accordingly kind reader) we can transition over to a real sport. Our team has questions. We have answers. Well kinda.

The Canucks enter this season at a bit of a crossroads, leaving their ardent faithful hoping there is still time to pull it all together with this current core and their many (oh so many) critics twiddling their sinister fingers waiting for their inevitable implosion so they can don their new dance shoes and start twerking on Vancouver's unmarked grave.

By the way, tombstone twerking is the name of NM's softball team. You'd love the mascot.

As we eye the season opener a week from today against our new besties San Jose, let's take a stab at answering the three big questions facing our guys heading into the 2014 season. 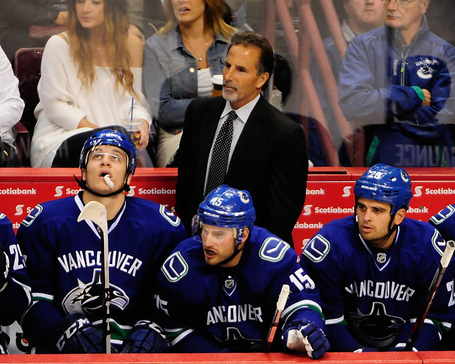 1. The Tortorella Effect
There’ll be plenty of ink spilled this year gauging how Tortorella runs Vancouver and Alain Vigneault runs the NY Rangers. The impact of Tortorella’s vision for Vancouver won’t be seen for awhile, but there have been plenty of hints: the internet nearly broke when he mentioned the Sedins would play on the PK and be expected to block shots. That was followed up with the sad face from advanced stats heads when Torts suggested he might have a different perspective on the liberal zone starts Vigneault gifted to the Sedins over the past several years.

Chances are there will be a fair share of similarities too. In his three full seasons (excluding the lockout-shortened 2013 campaign) in New York, Tortorella tossed Henrik Lundqvist to the wolves almost nightly rather than the timeshare Luongo has been in most recently. Though Luongo is a shade older than Lundqvist, it’s likely Tortorella will expect #1 to be #1 with Schneider taking his talents to NJ. Up front there have been plenty of chatter of the potential similarity between Ryan Callahan’s role and what Ryan Kesler’s role may become.

In the end it may not matter that much. The Canucks were a textbook example of a squad that had grown listless and predictable under Vigneault, so at the very least Tortorella’s voice is a necessary change. He's in a prime position to light a fire under the skilled players, develop the younger talent and give Luongo every chance to regain his foothold and confidence. But if he falters, will seeing the best laid plans tossed aside in favor of the long-awaited youth movement be an acceptable parting gift? 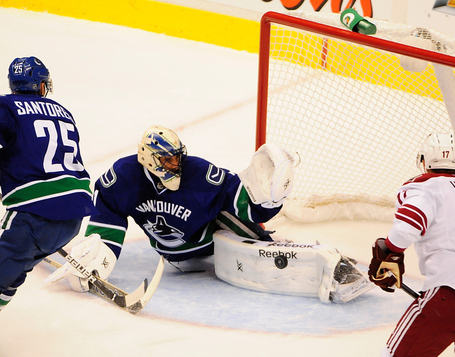 2. Which version of @strombone1 will show up?
Can you name a bigger soap opera revolving around any NHL player who hasn’t even changed teams the past five seasons? No, you can’t so don’t bother. After he had one foot out the door this spring, we can only imagine what his facial expression must have looked like when he heard Schneider was heading to NJ and Luongo was, once again, the Canucks starting netminder.

The drama aside, this is obviously a huge year for Luongo. Unhappily married to the organization as he may be, he’s back to being the starter during an Olympic year where he has his eyes set on being the #1 for the Canadian National team. That means some strong play should help bolster his confidence and benefit Vancouver, Team Canada and his future in the NHL all in one shot. Sounds easy enough, right? Of course Luongo is prone to slow starts and - if the preseason has any meaning whatsoever - he has already been on the wrong end of some lopsided scores.

Luongo remains an immensely special talent, one with a career save% of .919, good enough for third best in the past 20 years behind Hasek, Thomas and Lundqvist. He has plenty of good years left in him, but whether he can pull it back together under the persistent black cloud of doubt and scrutiny that hounds him is the question and without a strong back-up this season, the Canucks won't go far if he doesn't regain his form.

In Luongo we trust? Damn straight because we have no choice. 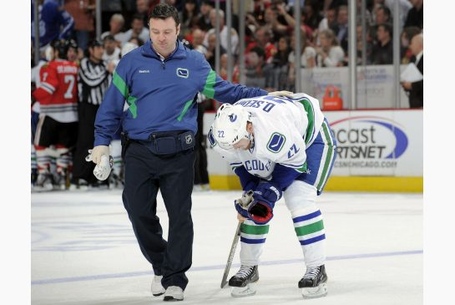 3. Is there a remote chance in hell they can stay even marginally healthy?
It’s tough to expect good results when your players spend more time hanging around hospitals than hockey rinks. The past few seasons haven’t been terribly kind to Vancouver in the health department (and we can’t even point at Sami Salo as the culprit anymore!).

Some of these injuries fall to the role players, but when the skilled guys take a fall - David Booth, Ryan Kesler, Alex Edler and let us give one last glove-tap to the almighty Manny Malhotra which seems appropriate in this context - it has a domino effect on the rest of the lineup and a farm system that until this summer was as thin as it gets. To keep pace in the Pacific Division the Canucks will need an ideal combination of pristine conditioning and general luck that any errant puck deflections, high sticks (too soon?) or skate mishaps don’t go their way for a change.