#3 on the list of the top Canucks seasons: 1981-82. A Cinderella playoff run earns the Canucks franchise its first trip to the Stanley Cup Final, where they lose to the powerhouse New York Islanders. Canucks legends like Stan Smyl, Richard Brodeur, and Thomas Gradin help create their legacy, while interim coach Roger Neilson provides one of the most iconic moments in team history and launches Towel Power as a Vancouver tradition.

After a hiatus, I am back to counting down the Top 10 Canucks seasons of all-time. The list is based on a combination of team success and the significance of the season to the Canucks' history. The list was arbitrarily made by me, so feel free to share your own thoughts and debate my selections in the comments section. See the bottom of this post for links to the previous seasons in the Top 10.

Based on their regular season performance, there was little to indicate that 1981-82 would go down as an all-time great season in Canucks history. After a 12 years of mediocrity since entering the NHL in 1970, the team had never even won a playoff series before the 1982 playoffs. However, after edging out the Calgary Flames for second in the division, well behind the powerhouse Edmonton Oilers, the Canucks would go on a Cinderella run and reach their first Stanley Cup Final in team history. I should note that Sean has previously written a great overview of the 1982 team, and I really urge you to go read it as well.

The Canucks roster in 1981-82 featured many names that are now part of Canucks lore, including Stan Smyl, Thomas Gradin, Richard Brodeur, Harold Snepsts, Darcy Rota, and Dave "Tiger" Williams. Nonetheless, it was not an overly successful team in the regular season. The team's trajectory took a major turn with five games remaining in the season, when the Canucks participated in a massive brawl with the Quebec Nordiques and their fans:

As a result of the altercation, coach Harry Neale was suspended for the remainder of the regular season and five playoff games. Assistant coach Roger Neilson took over the bench, and Neale left him in charge after the end of his suspension. More on Neilson in a moment.

Once the playoffs began, the Canucks swept the Flames to win their first-ever series and advance to the second round. In a stroke of good fortune, the Los Angeles Kings upset the heavily-favoured Edmonton Oilers in the other divisional series (the Oilers had 111 points, compared to the Kings' 63) in a series that featured the famous Miracle on Manchester comeback. This meant that the Canucks would face the Kings in the second round, a far less formidable matchup. After splitting the first two games of the series, the Canucks won three straight to take the series 4-1 and move on to the Campbell Conference Final against the Chicago Blackhawks. Again, the Canucks split the first two games before rolling over the opposition and taking a 4-1 series victory. The series also offered one the most iconic moments in Canucks, or even NHL, history: Roger Nielson's famous white towel salute.

The move came after Nielson felt frustrated at the referee's calls, and held the white towel aloft in mock surrender. It sparked "towel power" as a Canucks playoff tradition and has become an iconic symbol of the 1982 run. Nielson's "surrender" is, of course, immortalized outside Rogers Arena: 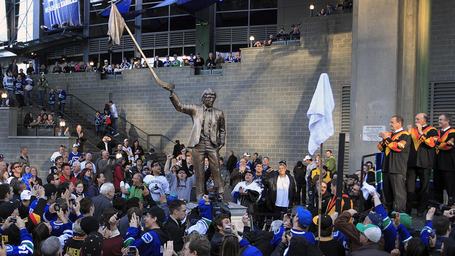 Unfortunately in the Stanley Cup Finals, the Canucks luck ran out. They faced the powerhouse New York Islanders, who had finished first in the league with a 54-16-10 record and who had won the Stanley Cup the two previous seasons. The Canucks scrapped their way to 6-5 and 6-4 losses on Long Island, including an overtime loss in Game 1, before losing the next two games on home ice against the much superior opponent.

The playoff run made legends out of players like Brodeur and Smyl. Thomas Gradin also put in an excellent showing, notching 19 points in 17 games - good for fourth in playoff scoring, behind the Islanders' trio of star players Mike Bossy, Brian Trottier, and Denis Potvin. Brodeur, in particular, played himself into Canucks lore (and was even the subject of a song):

The 1982 Stanley Cup Final run sparked a huge amount of local interest in the Canucks and is, for many fans in their mid-30s and beyond, a formative moment in their fandom. Despite being born one year after this season, the 1981-82 season was extremely impactful for my fandom because it helped spark my older brother's interest in the team, which in turn had a profound influence on my own development into a Canucks fan. The unexpected playoff run makes 1981-82 the third best season in Canucks history.