A Quick Thank You To Keith Ballard Using Video Highlights

A video tribute and goodbye to a classy Canucks defenceman who just couldn't get a fair shake in Vancouver.

Share All sharing options for: A Quick Thank You To Keith Ballard Using Video Highlights

The Canucks will pay Keith Ballard $1.4 million over the next 4 years as per the new CBA rules on compliance buyouts. Thankfully, it's the owners' money and won't count against the cap. Thankfully Ballard, who never really got a fair shake in Vancouver, will get a fresh start in Minnesota, his home state, as the Wild have agreed to terms on a 2-year deal for the mobile defenceman. In Minnesota, Ballard has a fighting chance to get more minutes and put up more points. That's the kind of defenceman he is.

"How well he handled it all did kind of surprise me," Hankinson said. "It killed him to be sitting in the stands, watching from afar. But he never brought anyone else down.

"That’s probably why he lasted there. If he was a cancer or a squeaky wheel, he probably would have been out of there sooner.

"He just kept taking his medicine and showing up every day, fighting to earn the respect of his teammates and the coaches.

"He did everything he could there, but it just wasn’t a great fit.

"As crazy as it sounds, this is a good ending, and it gives him some closure."

I hate to agree with agents, but that sounds spot on.
What a classy guy through a disturbing few seasons. Congrats, Mr. Ballard! Hope all goes well in Minny!
So, we say good bye to a class act...by bringing the goods:

But what we all know Ballard best for:

Wee! This was approaching the end of the Canucks doing hip checks:

Yankee will love this: Ballard takes out Hordichuk on Hordi's first shift against his former team:

Is this guy a hip check king, or what?

Thanks again for everything Keith! You were always one of my faves. But please..don't kill a Sedin next time the Wild and Canucks play eachother, OK? You can destroy Booth though, we don't mind. 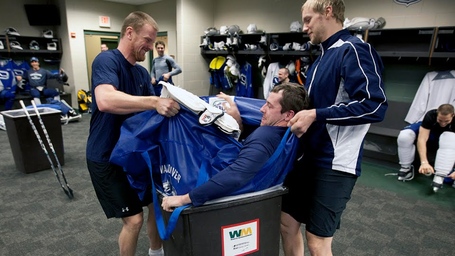 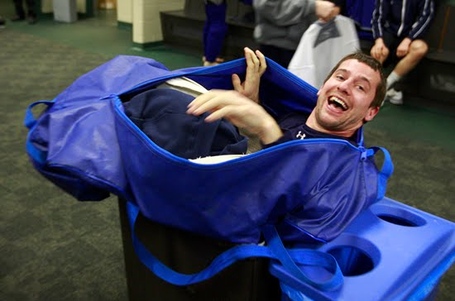