Sharpen your scalpels and snap on a pair of rubber gloves: it's time to dissect the Canucks 2013 season on a player-by-player basis. You might want to wear facial protection, this could get messy.

History: Undrafted, Tanev signed with the Canucks as a free agent out of the Rochester Institute of Technology in 2010.

Tanev played in 38 games this season before suffering a high ankle sprain and missing the remaining 10 games of the season and the playoffs. He put up 7 points and was a +4. As the youngest player on the blueline, Tanev was mostly utilized on the 3rd pairing with Keith Ballard or Andrew Alberts, but he slid up into the top four as needed. Tanev sort of acted as a life ring for some of the team's more volatile defencemen, as he was sometimes paired with Alex Edler or Ballard as a means to help them re-find their games after a particularly rough stretch.

Tanev had a terrific season for a 23-year-old defenceman. He came into the abbreviated training camp fighting to cement his spot in the top six, and it wasn't long before he was being relied upon heavily. A big part of that was the fact that outside of Kevin Bieksa, Tanev was the only other right-handed defenceman on the roster. This forced him into the top four at times, which is frankly a bit much for such a young player on a contending team, but Tanev handled it all with poise.

The defence was out of whack from day one of this shortened season, but after Dan Hamhuis and Jason Garrison, Tanev was a guy the coaches could count on to make smart plays consistently. One thing that really impresses me by looking at Tanev's numbers is his offensive zone start : finish ratio. Tanev only started 46.9% of his shifts in the offensive zone — the lowest of any defenceman after Alberts — but he finished 54.6% of his shifts there, the highest of any Canucks blueliner. Granted Tanev wasn't facing the same quality of opposition as a Hamhuis, Garrison, or Edler, but that's still very impressive for a 23-year-old.

How about his first NHL goal? This is still one of the highlights of the year for me:

This led to an extremely awkward post-game interview in which Tanev, not knowing what else to do as Dan Murphy threw back to John Shorthouse and John Garrett, simply stared into the camera and, by extension, the souls of Canucks fans everywhere: 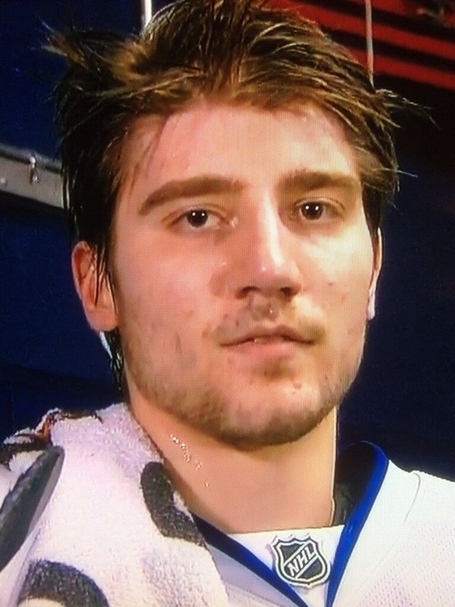 That led to one of the most awkward post-game scrums ever: 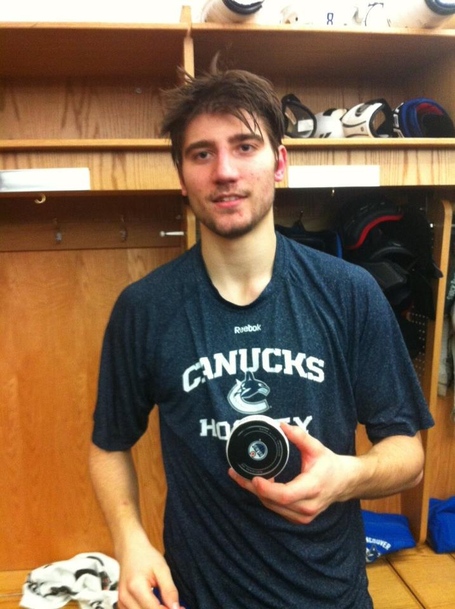 Here's Tanev's 2nd career goal, which he didn't look as excited about, probably because he had to hug Cam Barker after:

Cool. So what did we hate?

It's difficult to hate anything about Chris Tanev. If anything, he points to the flaws in how the Canucks defence is built. The shortage of right-handed shooters is painfully obvious if either he or Bieksa are out of the lineup (which they both were at different times this year). What saved the defence from complete disaster this season was a) Dan Hamhuis, b) Garrison's successful transition to his off-side, and c) Tanev's versatility with different playing partners.

The Canucks miss Christian Ehrhoff more than they will ever admit. Ironically, the top six may actually be better now than it was then, but the pieces aren't fitting together.

Here's where it gets interesting: Tanev is a restricted free agent this summer. He'll be getting a raise on the $900,000 he made between 2010 and now. A couple tweets from News1130:

#Canucks RFA defenseman Chris Tanev will represent himself in contract talks with Vancouver and with help from his dad Mike.

Mike says he knows the market for RFA defenseman and the range he'll be asking for.

As long as Mike Tanev doesn't prove to be cut from the same cloth as Brian O'Reilly this shouldn't be a problem, after all Mike did ink his son's entry-level contract. However, things are much more complex in the RFA landscape.

The real issue is the threat of the offer sheet. This scares me:

22. Phoenix will be on the prowl for offence. And hide your restricted free-agent defencemen from the Philadelphia Flyers.

That's Elliotte Friedman in his latest 30 Thoughts column. Will Philly take a run at Tanev?

Another team could offer Tanev up to $3.36 million, and all the Canucks would get is a 2nd round pick as compensation. That's hardly any consolation given how important Tanev has become, and the Canucks are in as much of a cap crunch as any team in the league this summer. It could get tricky.

Kevin Bieksa once joked that Chris Tanev could play the game with a cigarette in his mouth, but it's going to be Canucks fans who need something to calm their nerves if the threat of losing their best young defenceman becomes real.