We know how good P.K. Subban is. How good is his younger brother?

Welcome to the #Canucks family! RT @jordansubban So excited to be apart of the @VanCanucks organization!!

Impressive season he had. I believe he was 6th in scoring for defencemen in the OHL.

Subban has received a lot of attention in this league -- and most definitely will at the NHL Draft -- simply due to his name. With older brothers P.K. and Malcolm being second- and first-round selections, respectively, he has a lot to live up to.

While Subban likely will be drafted in the third or fourth round, he just doesn’t have the same upside as his brothers. He’s got a good, heavy shot and solid skating abilities, but is shorter than what’s usually desired. Subban also needs to work on his defensive responsibilities.

What the youngest Subban brother brings to the table is intelligence – he named to the OHL’s Scholastic Team this year. He transfers that intelligence on the ice, where he plays a solid, smart offensive game.

Via P.K. Subban on NHL.com:

"Jordan plays more of a cerebral type of game and is more of a thinker and I play off my instincts and try to do a little bit of everything," P.K. Subban said. "I think Jordan's skill level is much higher than mine. I'm on the ice with him every day during the summer doing skill stuff, and he's the one demonstrating the drill."

"He kind of wants to do more than what I've achieved, so he's a special individual and a lot different than I am," Subban said. "He will be an amazing player, and I think that a lot of people might look past him, but they're going to be surprised in the near future how good he is because I really do think he has a lot more potential than both myself and Malcolm."

"Put it this way: There are seven people in our family, and if there are six slices of pizza on the table, Jordan's getting one. He's that type of kid, and he has that type character."

Jordan Subban is a very, very talented offensive defenseman. He is fantastic on the power play and has blazing speed. Subban is so gifted on offense. He has a terrific wrist shot to go along with a very good slap shot. His passing is just as good (if not better) than his shooting. He shows poise and composure when he has the puck on his stick and has a passion for the game. He has a tremendous work ethic and is committed to getting better and bigger. Subban also is steady in his own zone.

The biggest thing holding back this Subban from being a high round selection in the NHL is that Jordan Subban is undersized. Not only is he shorter than what scouts would like, he also needs to add weight to be able to make an impact right away. While he is steady in his own end, Subban could work on his defensive game and try to not do too much.

So, we won't see the wild antics of PK in Jordan, but that's ok. I hope PK's analysis of his little brother is accurate because this could be a steal. 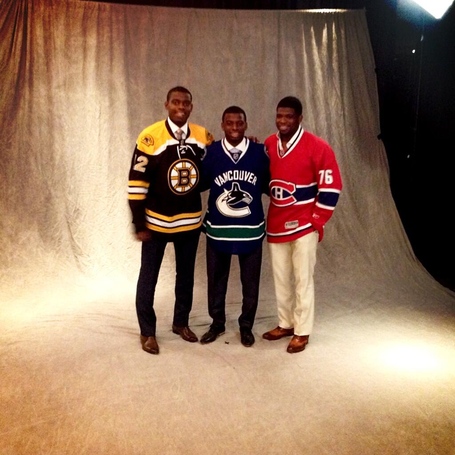