21 Days And 10 Games To Go - Canucks vs Coyotes Gamethread

Canucks host the Coyotes, as the playoffs loom in the ever-approaching distance.

Share All sharing options for: 21 Days And 10 Games To Go - Canucks vs Coyotes Gamethread

The Canucks showed up on Saturday night, that's for sure. It was a little hard not to, with the firesale starting in Calgary. Vancouver now sits 3rd in the conference yet again, although Minnesota is still very close behind. The fun is now beginning, though, as only a couple teams have more than 10 games left to play this season. Usually, at this time of year, there's a few teams that have clinched their playoff spots, but the shortened season means that Pittsburgh and Chicago are the only ones so far. Time to redecorate the standings again? Yes, I think so: 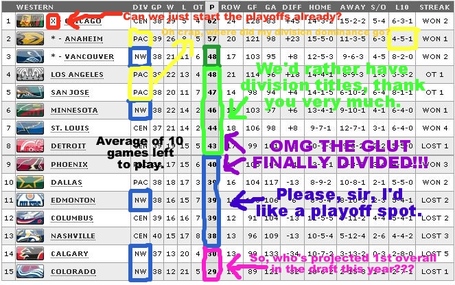 As I said before, Chicago is the first team in our conference to lock up a playoff spot, and is also only a few points away from locking up their division title as well. At the bottom end, Colorado and Calgary both need to go perfect all the rest of the way to stand a slim chance. At this time of year, I constantly recommend checking out SportsClubStats for all the statistical odds. (They even added in a template this year for what realignment would look like!!!)

For tonight's game, the Canucks get an opponent who is just barely on the outside looking in. The Coyotes are sitting 9th in the conference right now, only 3 points out of 8th. Mike Smith has had the bulk of the goaltending duty this season, although ex-Canuck Jason Labarbera has also had a few games. Shane Doan and Mikkel Boedker share the team lead with 24 points each, and they will be without our beloved ex-Canuck Raffi Torres, who got traded last week. The Canucks will counter with Cory Schneider in net, as well as the returns of Keith Ballard and..... OMG IT'S RYAN KESLER!!!!