Canucks Play of the Week: Welcome to Vancouver, Derek Roy!

The Canucks Play of the Week is a weekly feature that breaks down the best play from the past seven days. This week: Derek Roy gets a nice assist in his Canucks debut.

Share All sharing options for: Canucks Play of the Week: Welcome to Vancouver, Derek Roy!

The play actually starts with a really impressive bit of defensive work by Kevin Bieksa, who bats a cross-crease pass out of midair and right to Jannik Hansen. Bieksa not only prevents an excellent scoring chance for the Oilers, he also launches the breakout by the three Canucks forwards. Sadly he did not receive an assist on the goal, despite being instrumental to its development. 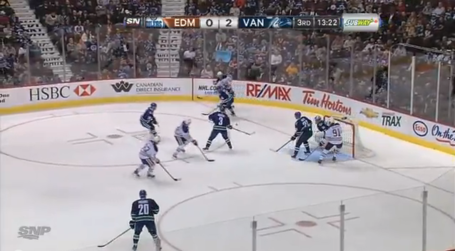 With four Oilers players trapped deep, the Canucks break out on a 3-on-1 from their own zone. Great work by new Canuck Derek Roy, who has already recognized the turnover and busted from the corner into the breakout, leaving his his man steps behind and allowing the rush to involve all three forwards. 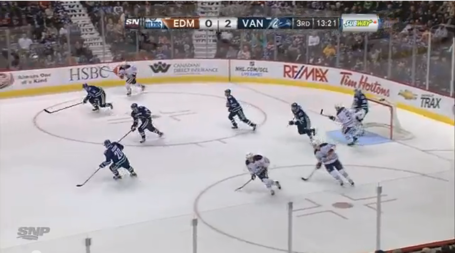 After Hansen feeds the streaking Roy, the three move into the Oilers zone. Roy does a good job of threatening the shot, forcing Nikolai Khabibulin to play off his line and take away the angle. As such, there is ample space for Chris Higgins to slot the puck in if Roy can get the puck to him (spoiler alert: he can). 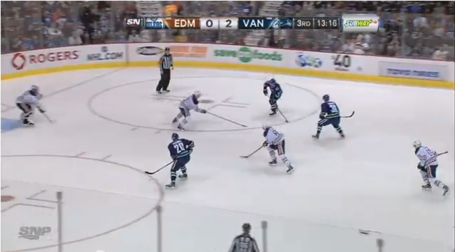 After the nice pass from Roy, Higgins slides the puck past Khabibulin, whose angle-cutting has now backfired as he does not have time to get across to cover the Higgins shot. A sliding Ales Hemsky, who does a painful face-plant into the boards as a result of his desperation defensive effort, is helpless to prevent Higgins getting the shot off. 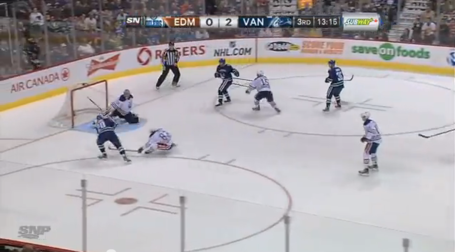 GOOOOOOAAAAAALLLLLLLL!!!!!!! Higgins has given the Canucks a comforting insurance goal and a 3-0 lead, while Roy has his first point as a member of the Canucks. Welcome to Vancouver, Derek! 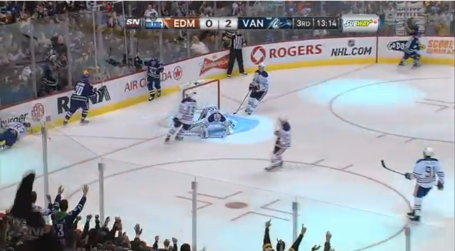 While the non-trade of Roberto Luongo garnered headlines, the Canucks' acquisition of Derek Roy was the team's most significant move of the trade deadline frenzy. In Roy, the Canucks receive a skilled centreman who helps compensate for the current void at second-line centre and provides excellent depth at the position when Ryan Kesler returns from injury.

Roy wasted little time in making an impact in his first game, generating chances and setting up Higgins' pretty goal. If the Canucks make a playoff run this year, Roy will no doubt be a key part of the team's success. Let's hope this is the first of many pretty plays and important points from the new centreman.

Plus, helping turn the tables on the Oilers by avenging an ugly 4-0 loss from the previous time these teams met makes this goal, and this victory, all the sweeter.