Episode V- The Empire Shaps Back It is a dark time for the Canucks. Although the Fea-Star has been destroyed, Western troops have driven the Canucks forces from their hidden base and pursued them acrossthe Conference. Evading the dreaded window closing, a group of lozenge fighters led by Mike Gillis has established a new plan on the remote ice world of Miltcouver. The evil lord Darth Doughty, obsessed with complaining about the Canucks, has dispatched thousands of sound bites into the far reaches of space... 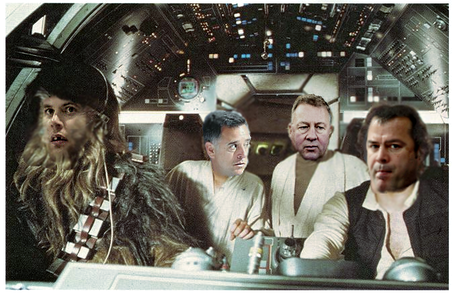 Thanks as always to Mrs Waachcast for the kickass photochop :)

Well, it's already been an exciting deadline week, hasn't it? Let's be honest. There's one potential trade we're waiting for. Whether you want it to happen or not, Roberto Luongo is the focus of everyone today. But for a deadline that was supposed to be lackluster, it's been anything but. The Jarome Iginla debacle, Ryane Clowe, Jaromir Jagr. Hell, even Jay Boumeester. Lots of players moving, some ridiculous prices being paid, it's Christmas for us hockey junkies.

So here's how this is going to go down today:

- We're going to try our best to keep up on things, and will be monitoring twitter as well as the broadcasts of TSN and Sportsnet.

- If you can, please take a look to see if someone's already posted a link or tweet you want to post, just to avoid too much overkill.

- Should a deal go down that is, say a bit traumatic, try and keep your composure. Let's keep this fun, and be mindful that you're gonna see opinions you may not agree with. We're pretty proud that things rarely get crazy with namecalling and such, so let's keep that going, shall we?

The Canucks, by their own admission likely aren't done, still looking for a forward and Dman to fill things out as they head into the stretch drive here. Is he really going to be 'Stand Still Gill' or is Mike Gillis going to make his mark with some #boldmoves? Grab some coffee and join us, won't you?