Canucks Play of the Week: Daniel’s sweet breakaway goal against the Blackhawks

The Canucks Play of the Week is a weekly feature that breaks down the best play from the past seven days. This week: Daniel Sedin scores a pretty breakaway goal to seal a win against the Blackhawks.

Share All sharing options for: Canucks Play of the Week: Daniel’s sweet breakaway goal against the Blackhawks

The breakaway opportunity occurred thanks to some nice defensive work, most notably by Jason Garrison (who did not receive an assist on the play, despite allowing it to unfold). Here Jonathan Toews looks to receive a pass in a dangerous area. If he gets this puck on net, Cory Schneider will be forced to make a quick reaction save. And should there be a rebound, Patrick Kane is buzzing around the slot looking to pounce. 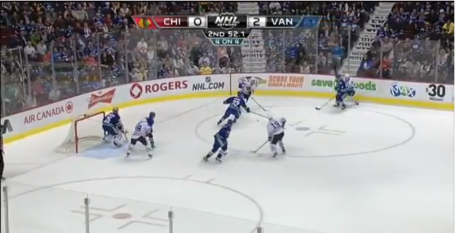 Fortunately, Garrison does a great job to tie up Toews and take him out of the play. This leaves the puck loose for Henrik to pounce on it. 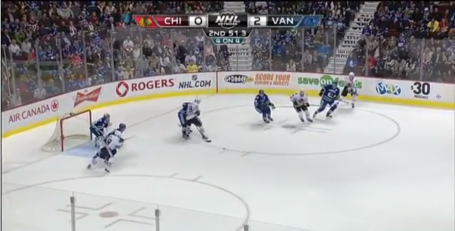 Henrik makes a really, really nice behind-the-back soccer move here to kick the puck away from Kane. Seriously, go back and watch the video. What a nice little play to free up the puck. 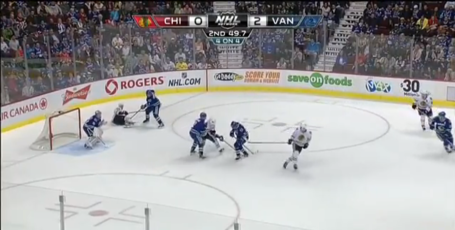 Now Henrik is free to break out of the zone. Not pictured: Daniel, who has busted behind the pointman Niklas Hjalmarsson. Henrik must be a very good billiards player, because he makes a near-perfect bank pass off the boards to his onrushing brother. 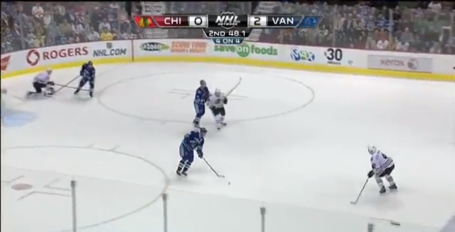 Daniel takes the puck in stride, miles ahead of Hjalmarsson and steps ahead of and half a rink away from Duncan Keith. He is in the clear. 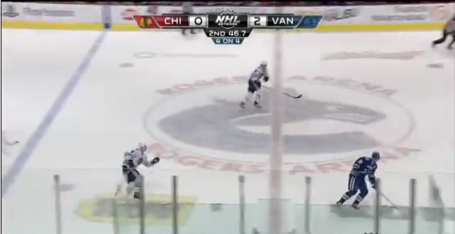 Daniel move in and dekes to the backhand. Corey Crawford has to respect the backhand, yet is anticipating that Daniel will move to his forehand and attempt to roof the puck. 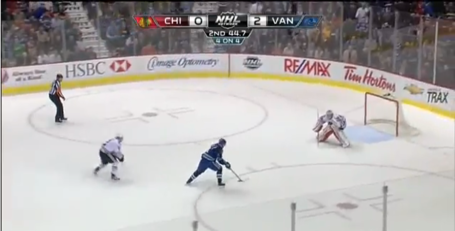 Daniel briefly brings the puck to his forehand before returning to his backhand. As Daniel dekes, Keith delivers a hard slash to Daniel hip. Thank goodness Daniel is protecting the puck by deking to his backhand, otherwise Keith's slash could have done some serious damage to his arm/wrist. 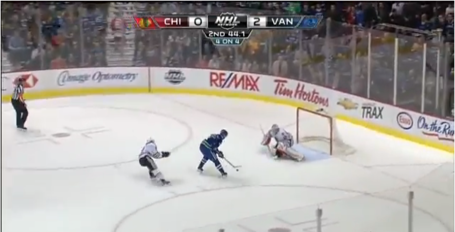 Daniel cuts to the left but stays with his backhand, drawing Crawford out of position and leaving a huge amount of net for the winger to score into. Daniel makes no mistake on the backhand, before tripping over Crawford's outstretched pad and tumbling into the end boards. Pretty goal all around. 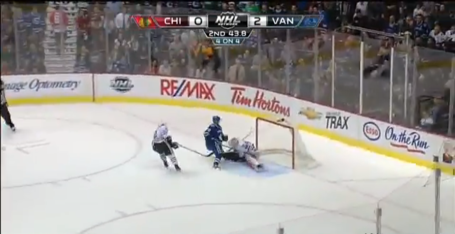 As meaningless games go, this was a pretty great one. The Canucks, with the Northwest Division crown all but clinched, faced the Blackhawks - who themselves had all but wrapped up home ice for the duration of the playoffs. Despite carrying little significance beyond the symbolic, both teams came out hard and delivered an entertaining game that surely made more than a few fans secretly hope for a Western Conference Final matchup between these two bitter rivals.

This was Daniel's second point of the game. The first, an assist on Zach Kassian's second period goal, moved him ahead of Markus Naslund into second on the Canucks all-time scoring lead (Henrik "Ironman" Sedin, who has played 34 more career games, is in first place with a 34 point lead). That goal (which could have also landed in this spot as the POTW) drew this reaction from the Canucks organization and fans:

The goal, aside from being yet another example of the amazing talents of the Sedins, was also notable for a rather unexpected reason, as Duncan Keith's aggressive and unnecessary slash on Daniel led to a now-infamous post-game exchange with a female report. As I said above, thanks goodness Keith's slash didn't catch Daniel's arm or wrist. Imagine the uproar if Keith had broken Daniel's arm, knocking him out of a second consecutive playoffs? As it is, this was yet another reason for Cancuks fans to hate Duncan Keith and the Blackhawks.

Overall, this was pretty much a meaningless game. However, it was certainly the Canucks' best effort of the week, far outshining the brutal games against the Anaheim Ducks and Edmonton Oilers that closed out the season. And it had its moments of beauty, including this goal by Daniel Sedin. I think the entire Canucks team, as well as its fans, is looking forward to playing much more meaningful games starting this week. Bring on the playoffs!