Canucks Play of the Week: When Cory Schneider “did everything” vs. the Red Wings

The Canucks Play of the Week is a weekly feature that breaks down the best play from the past seven days. This week: Cory Schneider stonewalls the Red Wings to help the Canucks clinch a playoff spot.

Share All sharing options for: Canucks Play of the Week: When Cory Schneider “did everything” vs. the Red Wings

So, this Pavel Datsyuk guy is good at hockey. This play arises because of his passing wizardy and hustle. Here, he blows past Ryan Kesler to set up a 3-on-2 rush for the Wings... 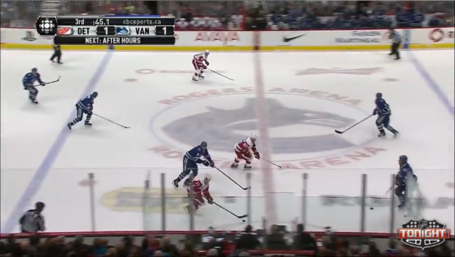 ... and here, after drawing Andrew Alberts out of the play, he flips a beautiful pass to Johan Franzen to essentially create a 2-on-1 rush inside the blueline. Because Datsyuk has sucked Alberts in and Jason Garrison is trying to cover Justin Abdelkader on the left-wing, Franzen has a massive gap and appears to have an almost clear path to the net. 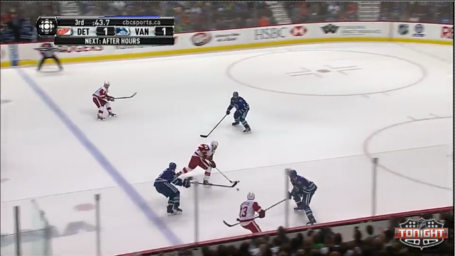 It's not too often you can say this, but credit to Alberts here. While he was too far out of the play to cover Franzen, he recovers enough to take away some of his time and space. Kesler's backcheck also helps ensure that Franzen cannot get a Grade A scoring chance here. Also, look at Datsyuk - he is like a shark cruising around waiting for the right moment to strike. No Canuck is paying him any mind, as all the focus is on Franzen. 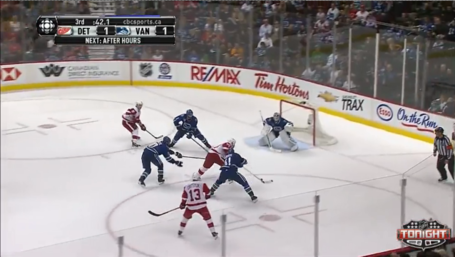 Schneider makes a nice save on Franzen, who is then taken out of the play by Alberts. Kesler and Garrison have Abdelkader effectively tied up. So that rebound lying in front of the crease shouldn't be too much of an issue then, right? Oh yeah, crap. Datsyuk, one of the best players in the world, is completely unmarked and two strides from the puck and a likely goal. 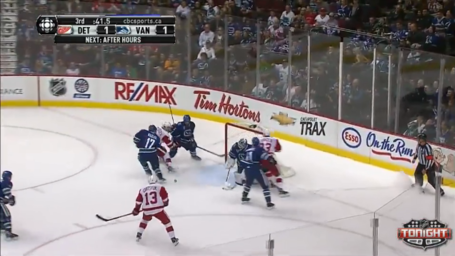 Thankfully the pucks glances off Kesler's skate and curls back toward the crease. Schneider takes advantage of this lucky break to make a great heads-up play. He shovels the puck away from the on-rushing Datsyuk, who is now being somewhat covered by Alex Burrows. Schneider's clearance moves the puck past Datsyuk... 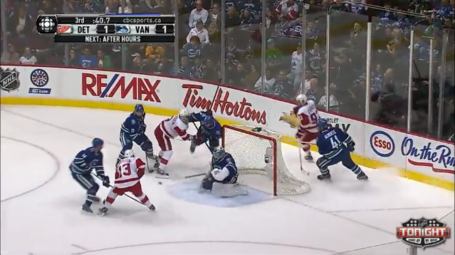 ... allowing Kesler and Mason Raymond to rush the puck out of the zone and out of danger. As Jim Hughson says of Schneider in the broadcast, "he did everything!" on this play. 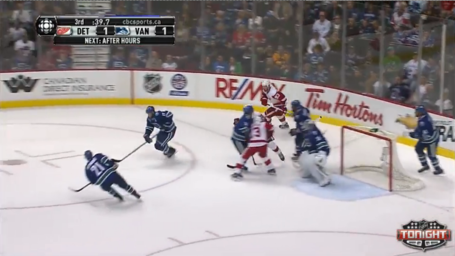 So far the Canucks POTWs have largely focused on goals. This week it's time to give some love to the most important man on the ice, the goaltender.

Let's be honest: the Red Wings deserved to win on Saturday night, and the only reason they did not do so was Cory Schneider. Schneider made 33 saves, and another three in the shootout, to hold a motivated Wings squad to just one goal. By dragging his team, which managed to put just 13 shots on Jimmy Howard in regulation time, into overtime, Schneider assured the Canucks of clinching their fifth straight postseason berth. Remarkably, since the end of the 1999-2000 season (after which the Canucks drafted the Sedin twins), the Canucks have made the playoffs in 10 our of 12 seasons. Not too shabby.

What is impressive about Schneider is how calm and positionally sound he looks. This save against Franzen, following some shoddy Canucks defense, was impressive in and of itself. However, just as significantly, Schneider was upright and in a position to shovel the puck out of danger - particularly important given that the deadly Datsyuk was cruising toward the puck ready to pounce on it. The heads up play by Schneider potentially saved the Canucks from an embarrassing last minute collapse, and allowed them to eventually make it to the shootout, in which Maxim Lapierre ensured the victory with a great deke.

While the Canucks lack of offensive production and sketchy defense is a cause for concern, it's hard not to feel confident between the pipes right now. Schneider is playing lights out and, should he somehow falter or get injured, there is a pretty darn good goalie waiting on the bench who can step in if need be. And with plays like this, you know that Schneider will be ready come playoff time.