Canucks Brunch- This Could Get Ugly

On the bright side, Saturday showed that the Canucks were at least able to keep the Detroit Red Wings from scoring more than one goal. The problem? They couldn't score more than one either. They face off against the best team in the NHL this season tonight, needing just one point to clinch a 5th straight division win. Oh yeah, this one has ugly written all over it.

Share All sharing options for: Canucks Brunch- This Could Get Ugly 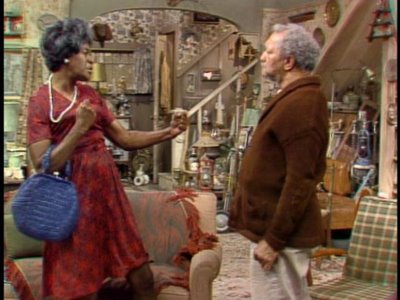 Fred Sanford (played by Redd Foxx): "I'm calling you ugly. I could push your face in some dough and make gorilla cookies."—Sanford and Son, Season 3, Episode 2, "Libra Rising All Over Lamont,"

Beset by injuries to key players all season long, the Vancouver Canucks have never been able to get into a really decent groove this year. Even their one prolonged winning streak saw them play some real head-scratcher games, but somehow they managed to come out with the two points. They've been showing signs of improvements in some key areas, like the power play and faceoffs, but there's still the problem of a defence that is so porous it leaves you wondering if the Canucks aren't headed for another 1st round disappointment.

The Canucks were lucky to have Cory Schneider in CWall mode Saturday night once again, but to a man the Canucks need to stop leaving it all up to him. I don't know what the issue is, but whatever Assistant Coach Rick Bowness is laying out for the defensive aspects of the game for them, it isn't working. And with the Hawks in town tonight, playing like they have this month is a recipe for disaster. There are some who say the Hawks are going to coast the rest of the way, perhaps rest some players. I call BS on that, especially tonight. I would expect we see the Hawks coming out looking to flat out blow the Canucks out of the water from the opening faceoff, and I wouldn't be surprised if we see at least one fight in the first 5 minutes.

As far as the defence goes, the Canucks are missing two major things right now: that element of nasty that Kevin Bieksa brings, and the calming element of Chris Tanev. Barring some type of medical miracle, the best we can hope for right now is to have them back in the lineup for opening night. Add in Chris Higgins, and that's three pretty significant pieces out of the lineup, and getting them healthy in time for Game 1, not to mention ensuring no one else goes down (like Keith Ballard Saturday night against the Wings) and we could see both Derek Joslin and Frank Corrado making their debuts with the Canucks tonight. Jason Botchford and Scott Rintoul discussed something to keep in mind this morning on the Team 1040: With the division pretty much locked up now, and nothing else to play for, how can we expect the Canucks to do more than coast like they did in the 3rd against Detroit? The priority to just get through the game without anyone else getting hurt has to be on their minds. As Botch said 'Where is the throttle set? 40%"

A couple interesting games tonight to keep an eye on. The Detroit Red Wings are taking on the Phoenix Coyotes in a battle of two teams desperately trying to remain in the hunt for the playoffs. The Wings haven't missed the playoffs in 20 years or so, and Phoenix has to be concerned about the effect of a team that struggles to draw missing the postseason. Expect a war, complete with Mike Smith shenanigans... The other one to watch is in Ottawa, where Matt Cooke and the Pittsburgh Penguins star in the season finale of CSI:Ottawa. Add in that Erik Karlsson could return to the lineup after having his achilles tendon sliced by Cooke's skate earlier this year, and you have to think this one has the potential for fireworks. The real crazy could come from Sens owner Eugene Melnyk, who claimed he is compiling 'forensic evidence' that Cooke deliberately injured Karlsson. If this day doesn't include a press conference with a power point presentation from Melnyk and/or a revelation of some type of recorded confession, I will be thoroughly disappointed.

Last night was the big Juno Awards, the Canadian version of the Grammy's, but there was a story that came out of the non-televised portion of the weekend that happened on Saturday night. The category was 'Best Metal/Hard Rock album' and the nominees were a pretty decent list of Canadian metal talent: Ex Deo (the Roman-themed side project of Kataklysm vocalist Maurizio Iacono), Cancer Bats, Castle (who? hmm..), Devin Townsend, and Woods Of Ypres. Woods Of Ypres were a doom metal band from Ontario who folded in 2011 when founder/mainman David Gold was killed in a tragic car accident, and the band's 5th album "Woods V: Grey Skies & Electric Light" was released posthumously. The band were a sentimental favorite, but I fully expected Townsend to snag the award. So it was a wonderful surprise when it was announced they were this year's winner, and Gold's mother was brought on stage to accept the award. Well done, Junos, well done. From that album, here's Travelling Alone.

And if there's any Hawks fans who came here expecting to see something different than what I wrote today...