The Canucks Play of the Week is a weekly feature that breaks down the best play from the past seven days. This week: Mason Raymond bats the puck out of midair for a pretty goal against the Flames.

As the Canucks enter the Flames' zone, you can already see that Raymond is wide open on the right wing and that all five Flames are keyed on on Kesler and Zach Kassian. Raymond remained essentially unmarked for this entire sequence - ultimately allowing him the time and space to put home his nice midair goal. 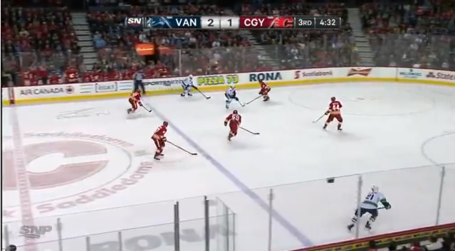 Kesler, surrounded as he is by Flames players, takes the safe option and rifles a shot toward the net. 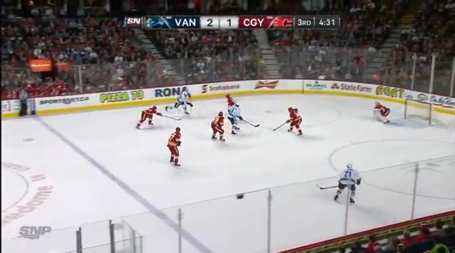 Mikka Kiprusoff makes the save on Kesler's shot, but the puck bounces past four Flames and two Canucks to the point. At this point Sven Baertschi appears to have become vaguely aware of Raymond's presence on the ice, but is non-committal to checking him - which is kind of fair enough, given that he should be covering a pointman, not a winger, and that one of his defencemen should really have noticed Raymond by this point. 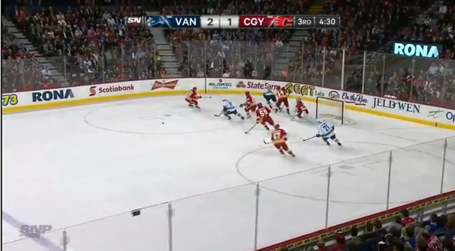 But because, somehow, no Flames player thought it was worthwhile to cover the point, Hamhuis is allowed to tee up a rocket from inside the top of the circle. Seriously, this is terrible defensive coverage. All five Flames skaters are below the faceoff dots because 5 seconds earlier they all focused in on Kesler and Kassian and ignored the other three Canucks on the ice. 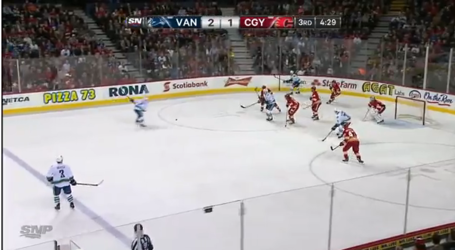 Because Hamhuis had the space to blast a shot from so close to the net, Kiprusoff is not able to control the rebound and the puck flies into the air. Raymond, as has been the case throughout this entire sequence, is all alone. Except this time he is right in front of the net with loads of time and space to pick the puck out of midair and bat it into the net. Kiprusoff is out of position because he had to stop Hamhuis shot, meaning that Raymond has the whole net to hit. It was a really pretty shot by Raymond, but there's no way he gets that off so easily if he has a defenceman covering him properly. It was a nice goal, but the Canucks better get used to having way less time and space once the playoffs roll around. 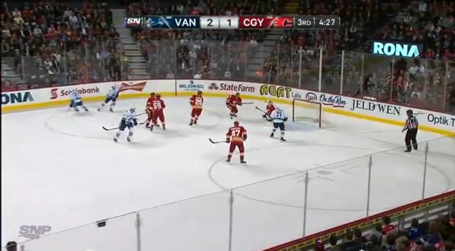 Finally, here are a couple closeups to demonstrate of Raymond's hand-eye coordination skill. 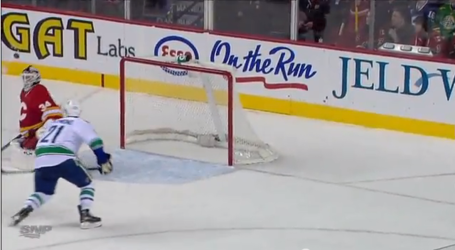 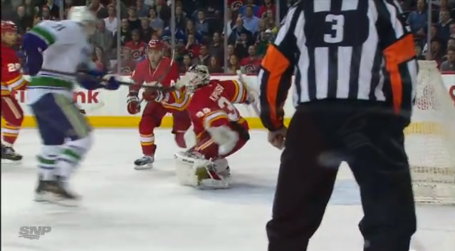 I picked this goal because I thought it was an impressive and highly skilled play, but it was also important in its in-game context because it gave the Canucks an insurance marker and a 3-1 lead in what had been a close 1-1 game through two periods. Mikka Kiprusoff had actually stonewalled the Canucks on numerous occasions throughout the game, so getting a third goal past him at this stage felt like a significant accomplishment in the game. With Roberto Luongo shutting the door (40 saves on 41 shots) at the Canucks end of the rink, a two goal lead allowed fans to breathe a little easier and enjoy watching the Canucks finish off the Flames for a 4-1 victory. The win earned an important two points for the Canucks as they try to clinch a fifth consecutive division championship.