It's one of those games that certainly looks like an easy two points for the Vancouver Canucks, and given their record over the Colorado Avalanche over the last few years, it's not unusual to think that. But it's also not unusual to accept that one of these days, a team you've beat 20 or so consecutive times is going to come back and hand you a loss. Let's hope the Canucks don't let that happen to the last place Avs today.

The Canucks are in Denver this afternoon for game two of their final road trip of the season, and while it's against the worst team in the NHL, they cannot afford to take the afternoon off. Locking up their 5th straight NorthWest Division title is still the goal, and making sure to get as much distance between themselves and the Minnesota Wild will do that. It's still not beyond the realm of possibility to catch the Ducks for 2nd in the West with a bit of help, and the higher they finish, the more likely to keep home ice advantage if they advance beyond the first round of the playoffs. A Canucks win combined with a Wild loss to the red hot Columbus Blue Jackets will give the boys in blue & green an 8 point lead with 7 games remaining.

We should expect Cory Schneider in net again for the Canucks after having dealt with his case of bad belly earlier in the week. His absence saw Roberto Luongo come in and stop 40 shots like it ain't no thang. One thing we should expect today is a big game from Jannik Hansen. Hansen found his butt stapled to the bench in the 3rd period of the game against the Flames because Alain Vigneault felt that others were 'playing better'. That's as close as getting thrown under the bus as you get with AV, so I would imagine Hansen gets the message loud and clear.

One thing that might help that was some line juggling at yesterday's practice. Hansen skated on the top line with the Sedins, while Alex Burrows dropped down to skate with Ryan Kesler and Zack Kassian. Interesting combos to be sure, and we'll see what they can accomplish should AV decide to roll them out. It looks like the Avs will go with JS Jiguere, as Semyon Varlamov is still out with a hip injury. I'm sure that the 'Las Vegas trip' comments made by Jiguere earlier in the week about his teammates and their apparent lack of interest and effort may be addressed with an Avs team trying to look like they did when they ended Chicago's record-setting win streak earlier in the season.

One thing that's been good to see of late is the power play awakening. While they still have a long way to go for their numbers to be respectable, the last 4 games have seen them scoring at a 23.1% clip. They will need the power play functioning even normally should they hope to have any success in the playoffs as we've learned from the last two playoff series this team has played. It's NHL game number 900 for Daniel Sedin today, let's hope he celebrates with another strong game against a team who's just had no answer for the Canucks the last few years.

I wanted to show you all a cool picture. This is my buddy Gordi Whitelaw, he lives in Japan and is a huge Canucks fan. Gordi said "Picture is at Minami Move On Arena in Osaka, with Osaka Pro Wrestling champion Daisuke Harada and American (I think he's American) wrestling photographer Kurt Schimmel". Looking good rocking the V, buddy! Canucks fans really are world-wide! 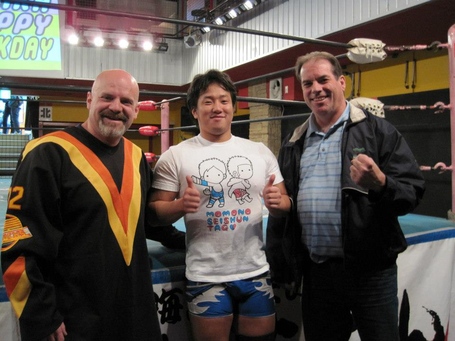 New stuff from Michigan-based melodic death metallers The Black Dahlia Murder today. 'Everblack' is set to drop in June, and if the rest of the album is like this, it's gonna be a monster.