Last week as a change of pace I looked at the Canucks individual and team puck possession numbers after a hectic week in their schedule. This week I'll explore PDO numbers to help pinpoint who's hot and who's struggling.

Along with Corsi and Fenwick, PDO is an extremely helpful statistic for helping paint a bigger picture of what is happening on the ice, specifically when it comes to pinpointing when a player is on a hot streak or when they're just a victim of bad luck. It provides a lot more context than a stat like plus/minus because it factors in what the entire team is doing when a certain player is on the ice. Hockey is a team game, so putting too much stock in an individual statistic like plus/minus is pretty ridiculous.

For the uninitiated, adding together a team's shooting percentage and save percentage while a player is on the ice generates their PDO number. If the number is much higher than 1.000 that player is generally producing at an unsustainable level over the long-term. The Canucks as a team have consistently had a PDO of over 1.000 the last several seasons due to elite goaltending, and they also have a couple special players on their roster who are able to drive shooting percentage.

Here are the individual player PDO numbers so far this season: 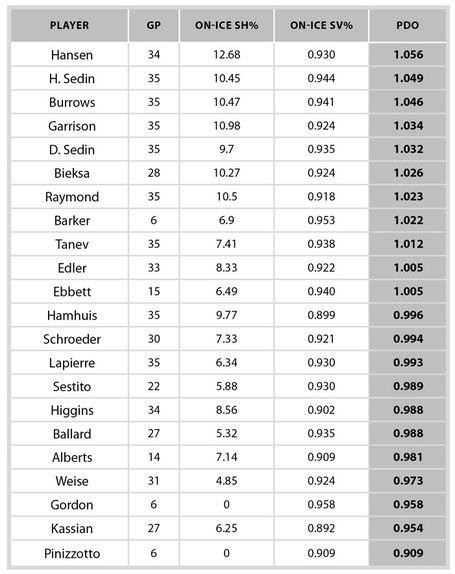 * All data bulled from Behind the Net.

To conclude, with a couple of exceptions, there's not a lot of evidence to suggest the overall performance of this group is going to change drastically over the remainder of this season. Hansen could cool off a bit, and when Kassian gets another shot in the lineup his production should pick back up.

With the lack of offense lately, and no statistical evidence to suggest that it's due for a breakout, this team needs a serious shot in the arm at the trade deadline. I believe they're two quality moves and a healthy Ryan Kesler away from contending, and while things could look a lot different in two days, at the moments it's difficult to feel overly optimistic about the team making a deep run this spring.