The Canucks Play of the Week is a weekly feature that breaks down the best play from the past seven days. This week: Dan Hamhuis makes a game-saving defensive play against the Blue Jackets.

Share All sharing options for: Canucks Play of the Week: "Great save by... Hamhuis???"

The play begins when Chris Tanev's attempted clear is blocked by the linesman. The Blue Jackets player at the point will dump the puck behind the net to Ryan Johansen (off screen). 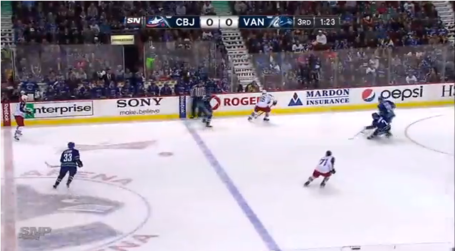 Right now, this does not appear to be an overly dangerous situation given that Tanev can cut off either a pass to Nick Foligno or a Johansen wrap-around. Although it doesn't look it in this frame, Dan Hamhuis has done well to hustle back from the point and into defensive position. 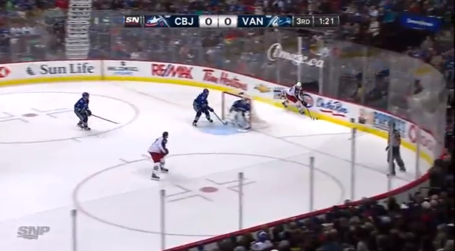 Welp. That got dangerous quickly. Once Tanev closes in on him, Johansen makes a nice spin move back behind the net. Tanev is behind him and unable to stop him without risking a penalty. Johansen is able to get around the net and feed a pass across to Foligno. Hamhuis, fearing the wrap around, abandons Foligno who is wide open to receive the pass. 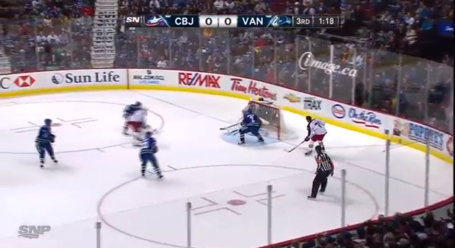 Foligno snaps a hard shot at the half-open cage. Cory Schneider, who had to commit to the wrap around is unable to get back quickly enough to cover the net. But Hamhuis has athletically done a 180 spin and kicked out his leg, just getting a toe on the shot to send it wide. 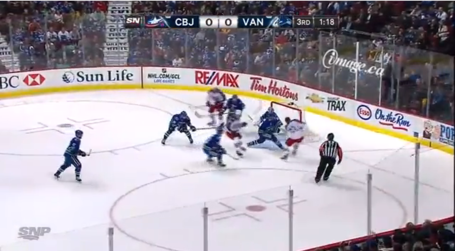 One more angle of the save. What a play! 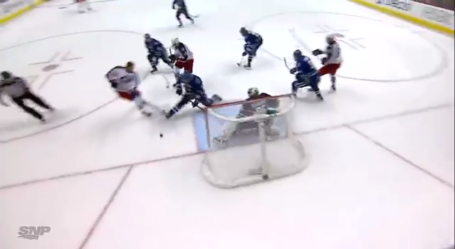 It's not a pretty or significant goal, but Hamhuis' acrobatic play was a game-saver for the Canucks. The play came with just over one minute remaining in the third period. Tied 0-0 with the stifling Blue Jackets, in a game that would ultimately end up at zeroes before the Canucks won in the shootout, Hamhuis' toe save prevented the Jackets from scoring what would likely have stood up as the game winner in this match. Suffice it to say, Schneider owes him a beer or two for helping to preserve the shutout and the victory.

Honourable mention absolutely goes to the Alexandre Burrows goal against the Colorado Avalanche. It was a pretty piece of Sedinery, and staked the Canucks to a 1-0 lead in a game they would eventually win 4-1. But Hamhuis' save helped the Canucks earn two points that they likely would have otherwise lost - which could have huge implications in the standings come the end of April.