Canucks Play of the Week: Hamhuis Kicks Off the Scoring vs. the Kings

The Canucks Play of the Week is a weekly feature that breaks down the best play from the past seven days. This week: Dan Hamhuis kickstarts the scoring against the LA Kings after some nice work by Henrik Sedin and Alex Burrows.

Share All sharing options for: Canucks Play of the Week: Hamhuis Kicks Off the Scoring vs. the Kings

The Canucks Play of the Week is a weekly feature that breaks down the best play from the past seven days. This week: Dan Hamhuis kickstarts the scoring against the LA Kings after some nice work by Henrik Sedin and Alex Burrows.

This weekly feature will break down the best play from the Canucks past week. The POTW may be the prettiest or most skilled moment, or it may be a moment that was particularly significant. Feel free to send me your suggestions for POTWs via email or Twitter.

Hamhuis actually starts this whole play by capitalizing on a Kings' turnover as they try to clear the zone. He alertly spots the loose puck and strips it from Kyle Clifford. 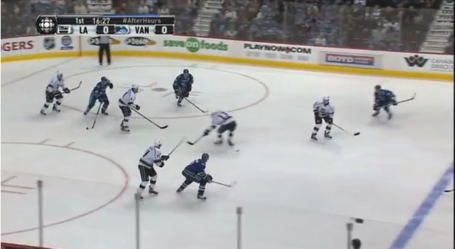 As three Kings converge on Hamhuis, he alertly fires a slick backhand pass to Henrik Sedin, who has moved to open space deep in the Kings' zone. 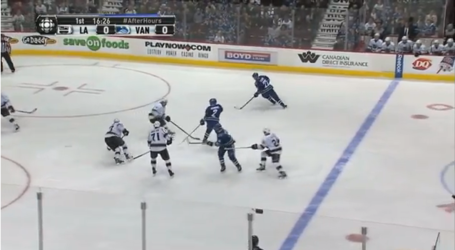 Cue the Henrik show: Hank dekes and dangles, showing amazing patience while waiting for an offensive opportunity to open up. What amazing hands and vision. 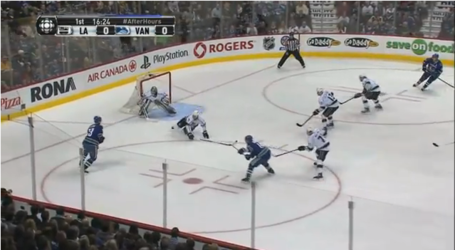 After 6(!) [edit: more like 5] seconds, Henrik has his opening. Burrows has parked himself on the side of the crease and is unmarked. In Gretzky-esque fashion, Henrik has the Kings mesmerized. Note that all five Kings players are focused on him and only two are actually taking a man. Hamhuis has taken advantage of this defensive lapse to move all the way down to the faceoff dot. 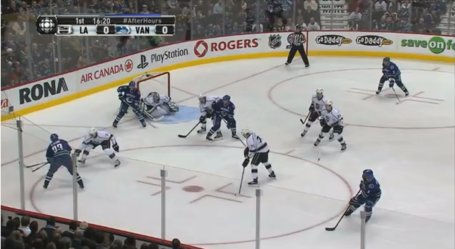 Burrows takes the pass and immediately looks up for an open man. Hamhuis is moving still deeper and Burrows spots him streaking to the net. He lays a nifty backhand pass right on Hamhuis' stick. 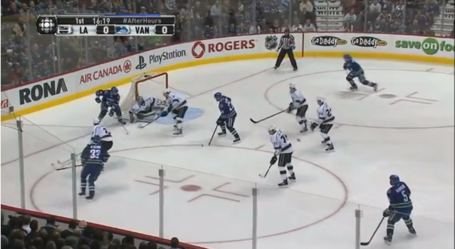 And Hamhuis, who is now level with the top of the crease, rifles it home to open the scoring. Encouragingly, Jason Garrison has moved almost entirely off-screen, and is in position to defend a Kings' break should Hamhuis miss this chance. Fortunately, it was a non-issue. 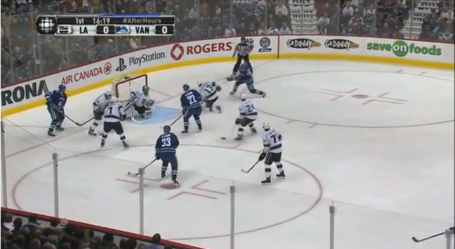 It was not the greatest week of Canucks hockey, but this goal stands out as the best play from the only good game of the week. Hamhuis' goal helped the Canucks to an early lead against the Kings, and the team eventually won the game 5-2. The wizardry of the Sedins is almost a given at this point, but it's worth considering how impressive Henrik's patience and puck control were on this play. Burrows also showed why he fits so well with the Twins and how he has learned to demonstrate similar patience - on this goal, he found some open ice and, despite being right in front of the net, took his time and found Hamhuis with a pass instead of trying to bang the puck home himself. Great work by the two forwards on this play.

Also, it's nice to see some offensive contributions coming from the blueline so far this season. The Canucks defense has contributed 15 goals so far this season, or 25% of the team's scores. In 2011-12, Canucks d-men scored a combined 40 goals, accounting for 16.5% of the team's offense. So this trend may not be sustainable, but it is welcome at the moment. The Canucks defense is usually given the green light to generate offense by jumping into the play, so perhaps the blueliners will continue to play a key role in the team's offense for the rest of the season.