Canucks Brunch- To Push Or Not To Push?

Things are getting a tad Shakespearian as the trade deadline nears. What exactly should the Canucks do here? There's been a need since before the season began to fill a void at center, but now the focus is shifting to not just fixing what's been missing to making the kind of upgrades that can turn this team into a much more serious post-season threat. Do they make a push for Jarome Iginla, or someone else? The spotlight is on GM Mike Gillis now...

Share All sharing options for: Canucks Brunch- To Push Or Not To Push?

The debate is raging on Team 1040 right now as Canucks fans discuss what the team should do as the playoffs loom: Stand pat because there's a wealth of players on our injury list right now that will be available come playoff time, or make a bold move, shifting some prospects and picks for a rental to improve the team's chances? It's a tricky situation to be sure, and much like the Roberto Luongo trade scenario, not by any stretch a simple one.

The Canucks prospects cupboard is not exactly overflowing. Once you get past Nicklas Jensen, Frank Corraddo, and Brendan Gaunce, there's not a lot there that anyone would be clamoring for. This is the price the Canucks pay for their regular season success over the last few years, lower end 1st rounders because of their place in the standings. The Canucks have made some significant deadline deals the last two seasons, and they couldn't be more different. Two years ago, the Canucks picked up Maxim Lapierre and Chris Higgins, and both of them have gone on to play significant roles with the team, quality role players that teams looking to make a deep playoff run need to have. They were able to part with prospects that haven't done anything of note since, either. But last year, the Canucks two deadline deals still don't sit well upon reflection. The acquisition of Sammy Pahlsson for Taylor Ellington was a flop, Pahlsson proving to be a past his prime dud instead of the tenacious checking forward that had given the Canucks fits in years past. The other trade? Cody Hodgson to the Sabres for Zack Kassian.

I want to be clear here. I am not reversing my feelings on this trade. Hodgson wanted out, and the Canucks got back what should be a fairly decent player for him, if what we've seen flashes of can be brought consistently by Kassian. That being said, with Kassian on the injured list, with no real timetable for his return thanks to a back injury that was giving him issues earlier in the season when he was with the Chicago Wolves during the lockout, it certainly feels like the changes made didn't just not help the Canucks when they got their asses handed to them in the first round by the Kings, but moving forward since then.

There's two options for making a trade here, really. One is to part with one of these prospects, and unless it was a no-brainer, I'd hate to see any of these 3 shipped out, especially for a short term rental player. The other option? Lowering the price for Roberto Luongo. There are teams out there still looking to upgrade at goaltender, and despite a lot of the MSM touting Miikka Kiprusoff as the answer to their prayers (especially due to his low cap hit) his numbers are long past being comparable to Luongo's. He's still a good goaltender, but I really can't see him putting a team on his back and leading them to a Cup.

There's still a lot of discussion about Jarome Iginla in a Canucks uniform, and I am still not convinced this is a good idea. Helping the Flames out of the god-awful mess they're in is not exactly a priority that any of us should be interested in. He's certainly long past his 50 goal season days, though the thought of a line with Iginla and Ryan Kesler is extremely appealing. So, I'm interested in hearing which guys you think the Canucks should be looking to if you indeed think they should double down and go for it. Also, with Carolina putting Jussi Jokinen on waivers, should they make a claim?

Chocolate cream cheese on a bagel...

Need a sign that the Toronto Maple Leafs have finally turned the corner from being bloody awful? Look no further than the last 3 days, where they took 3 of 4 points from the team that has owned them so badly you'd think there were dark forces at work (oh, wait...) the Boston Bruins. The Leafs are not exactly Cup favorites, but it looks like anyone who predicted this would be the season they finally make it back to the dance will be correct (ahem)... Great article from JT Bourne over at the Score this morning on hockey analysts being far more vicious towards players than those of other sports, and what might be the cause of this... Another fascinating read (though not really hockey related) is about the ongoing shenanigans involving the real life Montgomery Burns, Bruins owner Jeremy Jacobs in his battle over a Florida community where his family resides. You'll definitely hate the guy even more after reading this tale, but just in case, here's a picture to make your blood boil... 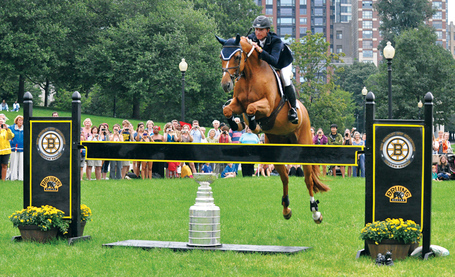 That's Charles Jacobs, son of Jeremy and competitive equestrian rider some time in the summer of 2011.

With news that the legendary Vancouver extreme metal act Strapping Young Lad are releasing a vinyl box set this summer, what better time to drag out a tune that should be the battle cry of Canucks fans worldwide.