The Canucks Play of the Week is a weekly feature that breaks down the best play from the past seven days. This week: Mason Raymond's breakaway goal stands up as the winner in a 1-0 victory against the Kings.

Share All sharing options for: Canucks Play of the Week: Hey Hey, MayRay!

After Ballard rings the puck around the boards, Hansen makes a nice player to tip it to a breaking-out Schroeder. Raymond spies open ice and is already streaking out of the zone. 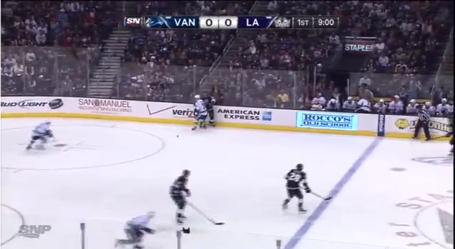 Schroeder has his head up and all kinds of space. Meanwhile Raymond is already a step ahead of the Kings' last man. As long as Schroeder can get the pass through, this is going for a breakaway. Spoiler alert: it is. 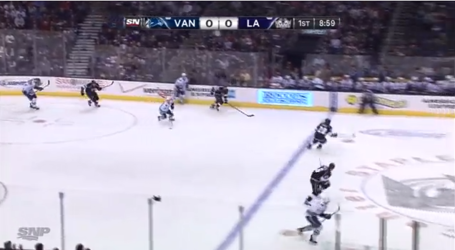 Sorry for the blurry screen grab. This is Raymond moments after receiving the pass from Schroeder. He is now well ahead of the Kings defender and is streaking in on Jonathan Quick. 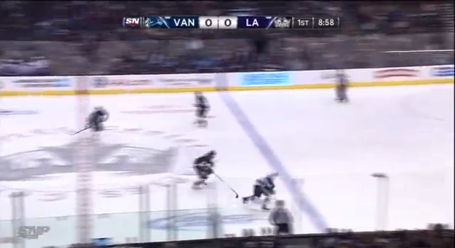 Raymond breaks in on Quick, who has moved out to cut down the angle. The Kings defender is not able to do anything to slow down the Canucks winger without risking a penalty shot. 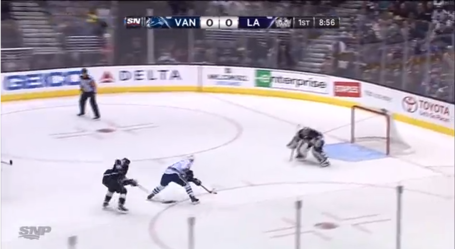 Raymond makes a nice move, pulling Quick to his right and then snapping a shot back across him to the left side of the net. 1-0 Canucks! 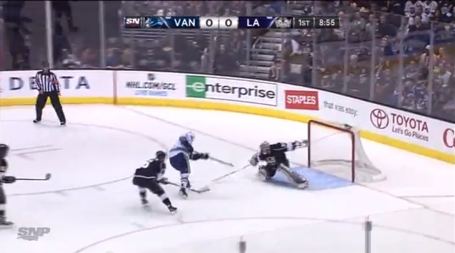 Well, things suddenly look a lot rosier today than they did a few weeks ago, eh? Granted the Canucks have not been dominant in reaching a four game win streak, but grinding out four consecutive one goal victories (all in regulation - no loser points for you, opponents!) is impressive, as is gaining 8/10 possible points over a very busy week.

The Kings have been playing impressive hockey lately, and you knew that Saturday's matinee game was going to be a tough one. Leaving Los Angeles with two points was huge. Cory Schneider may have been the star of the game, as he shut out the Kings' potent offense, but it was the red-hot Raymond's first period goal that would provide all the offense the Canucks needed in the game.

Raymond is now tied with Daniel Sedin for the team lead in goals, with nine, and has scored a point in each of the last four games. Skating alongside Jordan Schroeder and Jannik Hansen, Raymond has been looking confident and deadly lately. His scoring touch has been particularly welcome during the recent stretch in which Vancouver's offense has been underwhelming. Here's hoping he can carry on his strong offensive support down the stretch.