Looking at the possession data from the busiest week of the 2013 Canucks season.

I'm trying something drastically different in place of my regular weekly recap. This past week was likely the most unique we'll see from the Canucks in this shortened season for a few reasons: they played a ridiculous 5 games in 7 nights against some stiff competition (2 at home, 3 on the road), had a severely depleted lineup due to injury and suspension, and despite all that they collected 8 of a possible 10 points. It was an impressive performance given a less than ideal set of circumstances.

In situations like this the media will default to words like "grit" and "heart" to summarize. I want to dig a little deeper for context, so I assembled the individual Corsi +/- for each player during this five game stretch.

I know not everybody who frequents this site is on-board with underlying statistics, but the fact remains that if you're not at least considering what they have to tell you, you're not getting the full story.

A quick introduction: Corsi is a puck possession metric that measures all shot attempts for and against (including blocked shots) while a player is on the ice. As a team, the Canucks have been top five in the league in this category for most of the season, and it's a proven indicator of a team's future success.

Let's see how it breaks down individually over the past week: 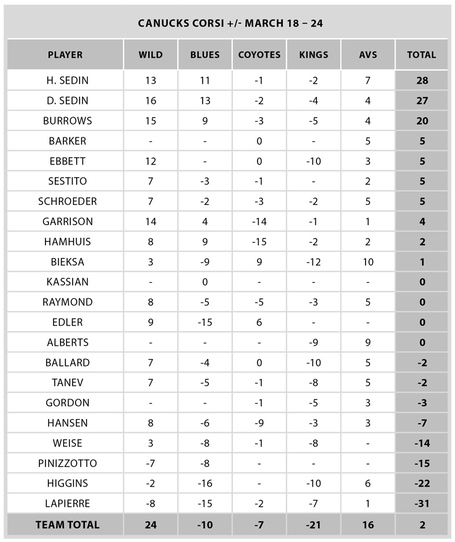 All data pulled from timeonice.com

To conclude, this was a fascinating week for the team, both in terms of the results, the stats, and the character they displayed through a tough slog. A key player was suspended, half the bottom six was hurt, and a defenceman was playing forward. For the first time all year I feel like we got a sense of what this team might be able to accomplish this season. The numbers were far from sparkling, but they're representative of a change in style due to the circumstances, and the good teams are the ones that can adapt and pull themselves out of tough situations.