You Gotta Fight For Your Right To Party - Canucks @ Avalanche Gamethread

Coming off a 1-0 win in LA, the Canucks hope to keep the streak alive in Colorado. Plus, Missy decorates the standings again!

Share All sharing options for: You Gotta Fight For Your Right To Party - Canucks @ Avalanche Gamethread

Rival territory: Mile High Hockey (they love their Pokémon over there)

We needed a gritty, hard-fought win in Californian territory yesterday. The Canucks got it, with Mason Raymond and Cory Schneider leading the way. With the absence of Alexander Edler on the blueline, they still found a way to make it happen. Now Vancouver has to face yet another division rival, although this one has been disappointing lately.

You see, when we first lost the division title to Minnesota the other week, I decorated the Western Conference standings to show the situation for the Canucks. Minnesota was ready for the steal, and Colorado and Calgary were both only a few points behind. Take a look now: 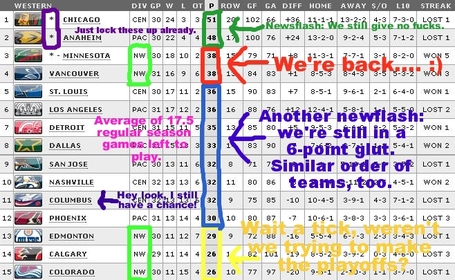 That is right: the Avalanche, previously poised to threaten us for a playoff spot, have only earned 4 points in 7 games since then. They have plummeted to the bottom of the West once again. What the hell happened, you guys? I was expecting Colorado to possibly pass Vancouver in the standings, so that the Canucks would get their butts in gear and fight for a playoff spot for once! Now the Canucks have yet another chance to take back the Northwest lead. You're making this way too easy for us!

You gotta fight for your right to play post-season hockey. Coconuts go!

Tonight's gamethread title comes from none other than the Beastie Boys:

(You Gotta) Fight For Your Right (To Party) (via TheBeastieBoysVEVO)