The Canucks Play of the Week is a weekly feature that breaks down the best play from the past seven day. This week: Henrik Sedin scores on a penalty shot to seal a win vs. the Predators.

The play that led to the then penalty shot began with a great breakout pass by a Canucks players (Burrows?) to Henrik. That's Henrik on the left of the screen, hustling out of the zone. Burrows(?) has all kinds of time to set up a perfect pass that will hit Henrik in full stride. 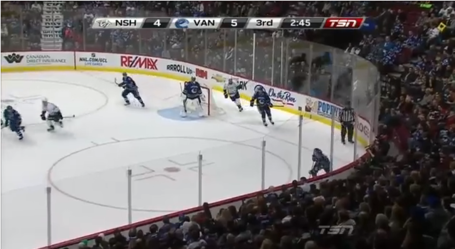 Henrik takes the pass with four Predators in his vicinity. Nonetheless, he spots a large gap and a defender turned the wrong way to defend it. He heads for the open ice to try to get behind the defenders. 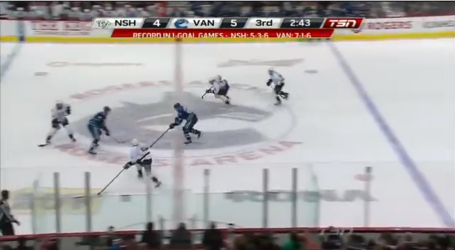 Henrik hits the gap and does a good job of protecting the puck from the lunging Predators d-man. The backchecking Sergei Kostitsyn has little ability to prevent a clear breakaway beyond hooking Henrik. 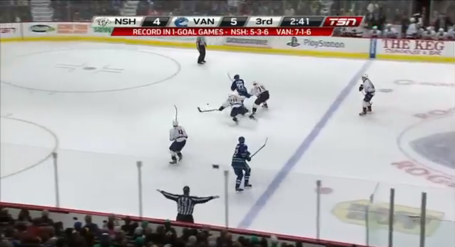 After Henrik is further hooked and, though unable to get a shot on goal, actually sets up a pretty good scoring chance, the ref points to centre ice. PENALTY SHOT!!! 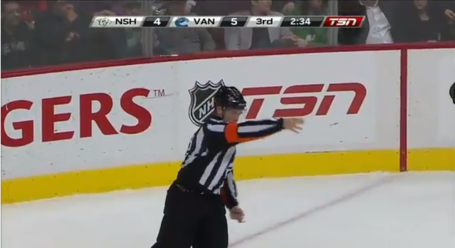 Henrik pulls a nifty fake, lifting his stick while keeping his eyes on the net. This freezes Mason, who must respect the blocker-side shot. 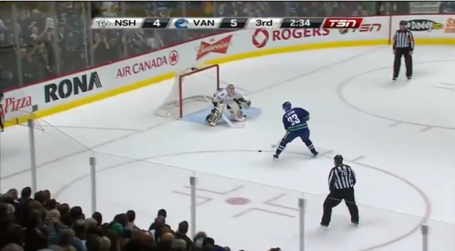 Henrik continues to his right, and Mason bites hard by sliding across the crease to prevent a glove-side goal. Henrik, however, is already pulling the puck back to his left to try to tuck it around the goalie. 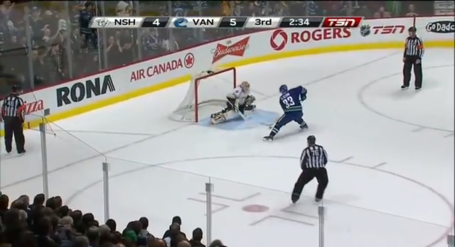 Aaaaaand scene! Mason is woefully out of position, having fully committed to the glove-side stop. Henrik has half the net to tuck the puck into and he does so without issue. A beautiful penalty shot goal by a man not usually known for his breakaway prowess. 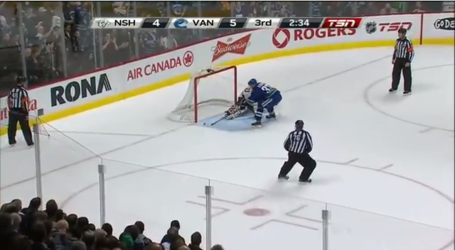 Despite the disappointing loss to the Detroit Red Wings, it was a better week results-wise for the Canucks (2-1-0) as they try to turn around a frustrating stretch. As such, there was no shortage of candidates for the POTW and many great plays got left out. These include Mason Raymond's beauty slapshot and and Alexandre Burrows' goal six seconds after the opening faceoff against the Red Wings. But Henrik's goal stands out above these both for its aesthetic value and its significance within the game.

Before Henrik drew the penalty shot, the Predators had registered two third period goals to draw within one of the Canucks. Suddenly a secure 5-2 lead had become a precarious 5-4 advantage. This goal halted the Predators comeback and essentially sealed what would end up as a 7-4 Canucks victory.

Also significant is Henrik's noted lack of prowess in the shootout. He is seldom used by Alan Vigneault in the shootout, and has a career record of 0/3. Needless to say, few Canucks fans were optimistic that he would score on Chris Mason. Even the Canucks players joked about this after the game:

"I heard AV ask to get a power play instead of me going down there on a penalty shot," Henrik Sedin quipped about his goal. Then Luongo chimed in, "Honestly I didn’t think he was going to score. I never see him score in practice."