For those of you who, with the help of therapy had blocked it from your memory, let me refresh you. The last time we played these guys, they scored 8 goals. A combination of lethargic, disinterested play, the worst officiating all season and the most ridiculous bounces for one team added up to an embarrassing and unacceptable loss. I do think they're ready to turn a corner here, and in doing so address this red menace for a little payback.

Share All sharing options for: Canucks Brunch- The Red Menace 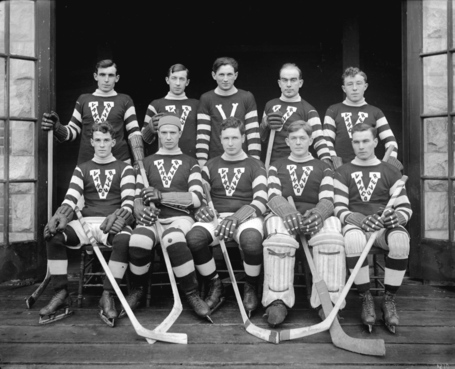 Clad in their Maroon & Cream Vancouver Millionaires throwback jerseys, the Canucks are looking to make amends for one of the worst losses in recent memory. The score wasn't the worst part of that game, it was the way they hung Roberto Luongo out to dry. There's simply no excuse for turning in an 'effort' like that. This team is better than that. After a wild one against the Preds (where some familiar defensive breakdowns and bounces made the game a lot closer than it should have been), the Canucks have some confidence heading into what should be a special night at Rogers Arena.

There were a lot of positive signs from Thursday's game against Nashville. A three point night from Andrew Ebbett was a definite surprise. Nothing says 'I don't want to go back to the farm tyvm' like a multiple point night, eh? Apart from a couple glitches, Zack Kassian had a pretty strong game, and much like David Booth, who ended his own goal scoring drought, the Zacken will find the net soon. It was good to have Juice back in the lineup, and while it wasn't a stellar game, the Canucks are a better team defensively with him in the lineup. I know we all held our breath when Chris Tanev took a Shea Weber slapshot off the knee, but he'll be good to go for tonight.

I like that Roberto Luongo's been given the start tonight, because he deserves a chance to make things right. While he had no help, he too was not good enough against the Wings last time, and as we've seen throughout his career, he responds to these kinds of games with big performances. I feel tonight will be no different. The Red Wings are coming off what can't be considered a positive Alberta swing so far, losing to the Flames then needing an own goal from the Oilers to get to overtime before Pavel Datsyuk did that annoying 'score a huge game winning goal' thing he seems to do from time to time. The Wings have been much like the Canucks this year, not really what people were expecting. They're already into double digits in the outright loss column, and as we head into the downward slope of this shortened season, much like the Canucks, the playoffs aren't a lock. The Canucks have the advantage of playing in a division with some truly horrid teams. The Wings? Not so much, and that's why for the first time in ages, the Wings are at risk of missing the post season.

The Red Wings are pretty banged up, and Kyle Quincy joined their substantial injured list last night after taking a puck to the face against the Oilers. Carlo Colaiacovo (shoulder), Mikael Samuelsson (broken finger), Darren Helm (back) and Todd Bertuzzi (back) are also out of action. Ryan Kesler and Manny Malhotra are the only ones out for Vancouver at the moment. Our friends over at Winging It In Motown are ready for tonight, and were nice enough to ask me 3 questions about the Canucks heading into the game tonight, which you can see here.

One of the special things about tonight's game will be the debut of the latest Johnny Canuck movie, and Canucks tv will be hosting a live show on You Tube, looking at the history of the Vancouver Millionaires and Frank and Lester Patrick, who left the NHA and moved to Vancouver, starting not just a new league but building a legacy of hockey in British Columbia. There's also a half hour special available right now for you to watch.

Combining a myriad of influences into a compelling mix of folk metal, Portland's Agalloch have been bringing their bleak, yet soulful creations to high acclaim in the underground metal scene for almost 20 years now. This song from their 2006 release Ashes Against the Grain remains one of my absolute favorites to this day.