Canucks Play of the Week: Hansen salvages a point against the Sharks

The Canucks Play of the Week is a weekly feature that breaks down the best play from the past seven days. This week: in what was a bad week for the Canucks, Jannik Hansen scores the tying goal against the Sharks to salvage a point.

Share All sharing options for: Canucks Play of the Week: Hansen salvages a point against the Sharks

The goal emerged from a broken play in the Sharks' zone. At this point the Canucks have turned the puck over and Dan Hamhuis, for some reason, is on his ass in the corner. Fun fact: 9 of the 10 skaters from both teams are in this screen grab, so there's not a huge breakout threat from the Sharks even though the Canucks defensive positioning appears pretty shoddy. 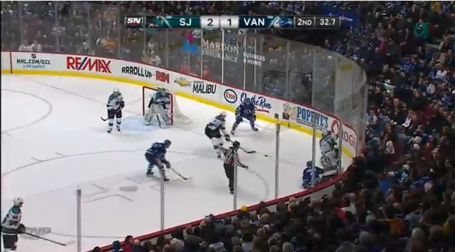 Hey look! Hamhuis gets back to his feet and strips the Shark defender of the puck. Two Sharks back off toward the goal and the four Canucks in the frame are still bunched together, so the play still does not look particularly promising for generating a quality scoring chance. 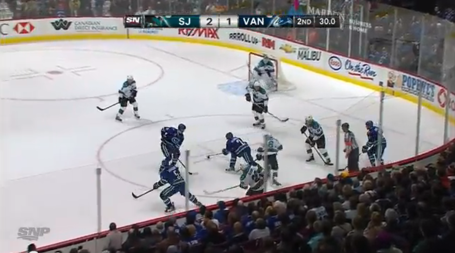 Suddenly things look more promising. Hamhuis gets crushed, but takes gets a pass across to Mason Raymond and takes out two Sharks defenders in the process. Chris Higgins is alone in front of the net, but the Sharks defenders are taking away the passing lanes. 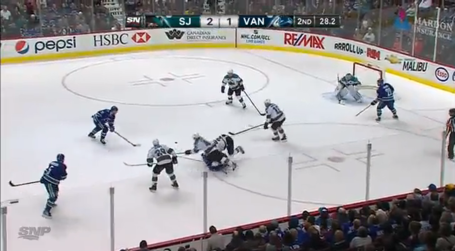 Raymond cuts left and appears to have a solid chance for a shot at goal, with Higgins now providing a screen. But what's this? Jannik Hansen, who has presumably been covering the point this whole time while Hamhuis was on his Excellent Adventure deep in the offensive zone, is suddenly sneaking in from the blue line... 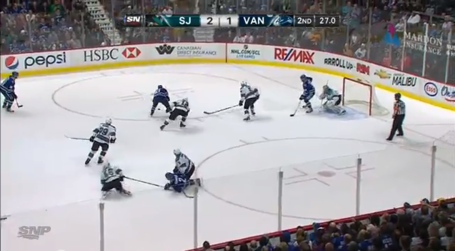 ... and Raymond makes the pass back to Hansen, who rifles it home for the clutch tying goal in the final minute of the period. Another fun fact: Hamhuis is still down on the ice, meaning that he began the play on his ass, got up to make a great steal and pass, and then ended up back on the ice as the goal was scored. Attaboy Hammer. 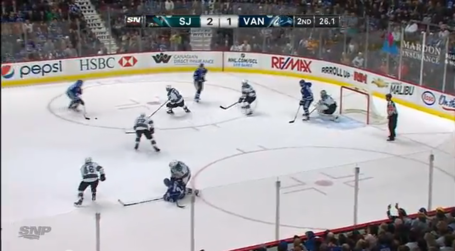 Honestly, this was the best play I could find from what was a pretty poor week of Canucks hockey. As Jordan put it succinctly earlier today, it truly was "a week to forget." There's probably some nice save by Schneider or thundering check by Hamhuis that I missed. But seriously, watch the highlights from last week's games and you won't find much to get excited about. Maybe of the Great Dane could have buried one of his shorthanded breakaways this would be a very different post... Here's hoping the Canucks get themselves sorted out and start picking it up this week.