The Canucks goaltending controversy took a frustrating turn this week as Mike Liut, agent for Cory Schneider felt it necessary to speak with the media about the situation. This was about as helpful as putting out fire with gas-soaked rags. I understand his desire to look after his client's best interests, especially when he was given the '#1 goalie' tag, but is Liut and others forgetting about the tale of Michel 'Bunny' Larocque? 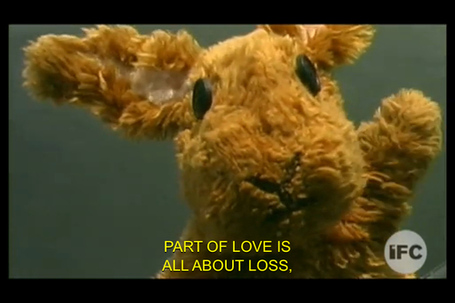 via 25.media.tumblr.com note: pretty sure that's not Michel Larocque in the picture above.

In this era of goaltending controversies (who am I kidding, Vancouver has been a constant source of goaltending drama since Jeff Brown met Mrs. Kirk McLean), there are some strong opinions out there about what the Canucks should do with their 'problem'. You know, the problem that's helped push them to the top of the divisional standings despite not playing what could be considered standout hockey to start the year. The fan base seems divided into three camps: the ones who want to see Luongo gone, the ones who think that they should actually trade Schneider because his return will be better for the Canucks, and the 3rd faction: those who want the Canucks to hang on to Lu for now. I know he's asked for a trade, but to me this really makes the most sense, and you need to look at Bunny Larocque as the reason why.

For you younger folks, Michel 'Bunny' Laroque was the backup for Ken Dryden during the Montreal Canadiens dominant 1970's period. During his run, he shared 4 Vezina trophies (back when they gave it to the tandem as opposed to the individual goalie), 3 with Dryden and one with Denis Heron and Richard Sevigny. And while Dryden was pretty much the best goaltender of the era, Larocque would easily have been the #1 on the other 15 teams in the NHL, posting some impressive numbers. 1975-76 saw Larocque play 22 games for a record of 16-1-3. One outright loss, in the pre-overtime era. Now we may never see another team as dominant as those Habs teams from the 70's again, but one of the main reasons they were so good (and won 4 Stanley Cups in that time frame) was they got amazing goaltending. They treated it as a 1-2 punch, and teams certainly had no better chance of beating them if the backup was the starter for the evening.

Let's be clear here: this year's Vancouver Canucks are not the reincarnation of the aforementioned Habs teams. But they are a team that can be a Cup contender. With Ryan Kesler back practicing with the team, and David Booth eventually returning, perhaps the 'ride out the storm' approach taken by Mike Gillis is the more practical one. I really don't believe that Roberto Luongo will get the bulk of the work this season, and we're going to see Schneider on a run here for the next few games, barring a total disaster. But unless George McPhee calls up dangling Nicklas Backstrom, my guess is we'll be rolling with the best 1-2 punch in the NHL for a while, and the only people it's distracting to are the ones who are having trouble making it fit into their narratives about the Canucks.

Another big divisional game tonight against Minnesota, and the question remains: Why are the Canucks so bloody awful in this rink? The Wild have been far from world beaters over the last few years, but you wouldn't know it by the scores from the Canucks' visits here. And it's not just Roberto Luongo. Top to bottom the lineup collectively fails when they play here. Let's hope this ugly and embarrassing trend ends tonight.

As cute as the whole 'coin toss' to decide who starts tonight by Alain Vigneault was, let's not kid ourselves. Cory Schneider was always going to get this start. Neither goaltender has played well here over the last couple years, but there are some buildings that goalies just struggle in, and this one is Lu's. Coming out with an early goal to take the crowd out of it would be huge. Silence them with one or two goals and get the fans moping into their lutefisk and getting that damn power play working, while they're at it. Keep the emotions in check, try and keep Mikku Koivu from getting an Ovechtrick, and just continue to play the smart, defensively sound hockey they've been playing of late and they can come out of there with 2 points.

So the Calgary Flames went out and signed one of the goalies on their farm team in Abbotsford to ensure they have a backup for Leland Irving tonight. Miikka Kiprusoff suffered the lower body injury in their 4-1 win over Detroit Tuesday, sending the Flames into a panic. Daniel Wagner has a piece over at Backhand Shelf on the Flames inking Abbotsford's Danny Taylor, and why they shouldn't have gone with Barry Brust instead. A good read from someone who's seen them both play a great deal... Speaking of which, Justin Bourne has a great piece on Danny Taylor, and it includes Taylor singing a song about getting sent from the AHL to the ECHL. Seriously... So one thing that will be fun to watch for tonight on Twitter is to see how many Hawks fans who poo-poo'd Canucks fans for their Duncan Keith rage get all biblical about the return of Raffi Torres to the NHL after his suspension tonight. I would suggest a drinking game for every tweet calling for violent physical revenge, but our legal team squashed that idea... This whole 'Rivalry Wednesdays' promotion on NBCSN would do better if the teams featured actually played like the bitter rivals they're supposed to be. Last night's Montreal/ Boston tilt was about as thrilling as a pre-season tilt between Columbus and Florida... Another day, another extra time loss for the Oilers last night as Jaromir Jagr shushed the crowd with the OT winner.

We knew regression was coming for the Oilers, but it's showing signs of getting ugly as the team still doesn't have much to speak of in terms of defence...

With news this morning that UK Grindcore pioneers CARCASS are mixing 15 tracks for their first studio album in 17 years, let's take a look at one of my favorite Carcass tracks from their reunion tour a couple years back...