This will be a regular Monday feature analyzing the major storylines and key players from the week in Canucks hockey. Hope you enjoy! If you don't, you can always find me on Twitter and tell me I'm an idiot.

The Canucks are about to enter a key part of their schedule. Over the next two weeks, they play Edmonton, Minnesota twice, Calgary, and Dallas. Each of those teams is very beatable, and by the end of that stretch Ryan Kesler and David Booth should be very close to returning.

Over the first two weeks of the season, the Canucks have mostly been able to pick up points against weaker opponents, while barely keeping their head above water against contenders like San Jose, LA and Chicago. We will see a different team out there once the forwards are healthy, but for now they must pick up points where they can, and the next two weeks offer several prime opportunities.

The lead up to the Blackhawks game on Friday pretty much eclipsed all other storylines in Vancouver last week, even causing us to temporarily forget the goaltending plight for a minute (more on that below). The game that was actually played on the ice fell far short of the expectations set by so much spilled ink, but that could be a positive for the Canucks. The last time a regular season game was that built up, it was against the Boston Bruins. Vancouver walked away with 2 points in that one too, but it knocked the wind out of their sails. Perhaps the team had that Boston game in the back of their minds as they prepared for the Hawks: there's no sense treating any game in the schedule as anything more than another 2 points. Save that emotion for the spring.

What more can be said about Roberto? He's putting on a show right now, and remaining as funny and relaxed as ever while doing it. NHL.com did an interesting feature on Luongo, revealing that he worked on improving elements of his game over the summer based on what he admires about the way Schneider plays. Nothing could be more indicative of the mutual respect between these two players, and it's a great example of why they can work as a duo again in this short season. At this point it makes sense to keep them both unless, of course, the perfect deal falls into Mike Gillis' lap . Is another team going to move significant pieces at this point in the season when everyone still feels that they're in the hunt? What's more, with the emergence of young players in the Canucks lineup, are the holes in the roster big enough to justify moving Luongo this season?

As mentioned, the Canucks have managed to fill a couple large holes up front with youth. Zack Kassian is looking more and more like a long-term fit with the twins every game, and Jordan Schroeder is making a very solid case to be the team's 3rd line centre when everyone is healthy. With the team struggling to sustain its usual dominance at even strength without Ryan Kesler and David Booth, imagine where they would be right now if Kassian and Schroeder had busted? It's less of a surprise, but Chris Tanev has been amazing as well. With these three players, the team has something they haven't had in years: young, cheap players on entry-level contracts making key contributions.

Ryan Kesler is back practicing with the team, but still won't provide a timetable for his return. Still, it is great to see him getting interviewed in the dressing room again.

Jason Garrison has been brought up in this post three straight weeks now, as he's drawn both praise and criticism in his first handful of games in a Canucks sweater. It was good to see him score his first goal as a Canuck last week, but it came along with his demotion from the top power-play unit. The media has jumped on Garrison because he's been slow out of the gate points-wise, while Sami Salo has had a great start in Tampa Bay. But consider that Salo has had the benefit of his team shooting at a ludicrously high 20.31% clip while he's on the ice. That's the highest in the NHL. If your team is scoring on one of every five shots when you're on the ice, you're going to look good. Garrison is currently at 10.17%.

Alex Burrows scored his first couple goals of the season this past week, and looks to be getting his timing back. The big question is where to put him once Kesler and Booth are back. If Kassian is still rolling, Burrows would be a good fit with his old friend Kesler, or he's even a darkhorse candidate to centre the 3rd line permanently.

The Sedins are slowly starting to round into form. It's been great to see Kassian excelling with them even when they're not in top form. The potential of this trio has me giddy.

How about that Chris Tanev? He just never messes up. There's been chatter about promoting him to the top four. When he eventually gets his first goal, I think Twitter is going to have a meltdown.

And finally, in preparation for the game tonight against the Oilers, the new Canucks February wallpaper has a great photo of Henrik Sedin skating around Ryan Whitney: 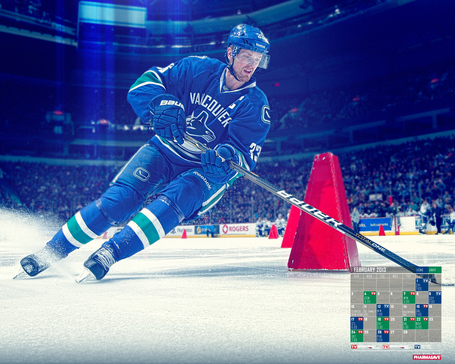