Canucks Play of the Week: Hank to Dank on the bank

The Canucks Play of the Week is a weekly feature that breaks down the best play from the past seven days. This week: Daniel Sedin scores on a pretty "intentional icing" pass from his brother Henrik.

Share All sharing options for: Canucks Play of the Week: Hank to Dank on the bank

This weekly feature will break down the best play from the Canucks past week. The POTW may be the prettiest or most skilled moment, or it may be a moment that was particularly significant. Feel free to send me your suggestions for POTWs via email or Twitter.

As the Canucks break out of the zone you can see that the Sedins are already looking for a long-bomb play - Henrik has his head up looking for the passs and Daniel is already streaking down ice toward the Red Wings zone. You can't see it in the frame, but the Wings' Jonathan Ericsson is back in a position to defend Daniel should he receive a pass on his stick. Little did he realize that the pass would not be on the stick at all... 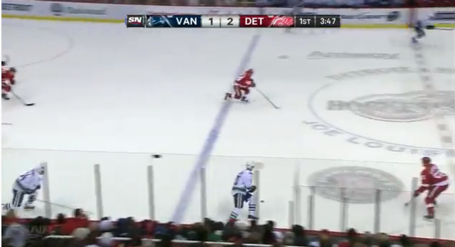 Henrik fires a hard pass toward the boards behind the Wings' net. Ericsson appears to have anticipated a cross-ice feed and moved into a position to break up the pass. To me this seems like a poor decision even if the Sedins were thinking "normal" pass, as he could have simply hung back and had body position on Daniel. Given the Sedinery unfolding, however, Ericsson is now in major trouble - Daniel is level with him and Ericsson will now have to turn around and catch up to him to have a chance at breaking up this play. 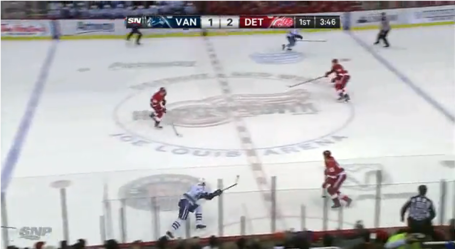 After the puck takes a perfect carom off the boards Daniel has a very short breakaway on Jimmy Howard. Ericsson's defending looks more stifling than it was - in reality he just got a stick on Daniel and was completely ineffective at preventing a goal. 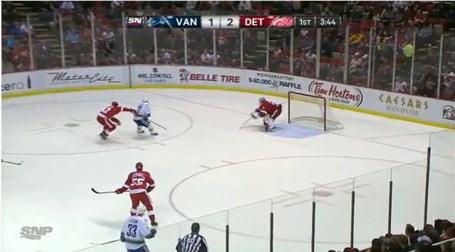 Daniel makes a nice move to finish this play with a goal, pulling Howard to his left before flipping the puck back over his blocker-side shoulder. GOAL!!! 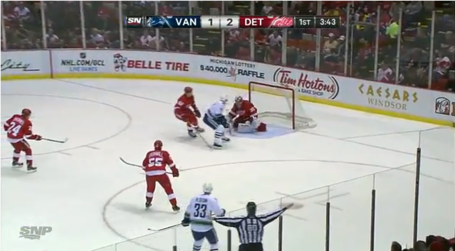 Let's not beat around the bush - the game against the Red Wings stunk. After a wild first period, the Canucks took a 3-2 lead into the second period before completely falling apart and getting shelled for five more goals in an 8-3 loss. So, though seemingly significant at the moment, this goal was pretty futile. But... silver linings, right?

The reason I love this goal is that it is one of those unusual plays that the Sedins have perfected and helped mainstream into the NHL hockey playbook. There are three quite unique plays that are widely understood to have been popularized 9if not invented) by the Sedins: the slap pass, the aerial breakout pass, and the intentional icing pass. As NHL.com correspondent Kevin Woodley wrote about the Sedins ahead of last year's All-Star Game:

Watching the Sedins saucer pucks across the ice to each other in practice -- sometimes from one end of the rink to the other -- over the last decade, always landing flush and flat on the other's stick, it's hard to imagine why anyone would want to deprive the fans of seeing that. The twins brought back the slap pass into the slot for a tip, and last season invented the intentional icing that's really a breakaway pass.

This goal is a textbook example of the intentional icing pass. It is not a play that can be used often, but when used at the right moment can be highly effective at creating a (short) breakaway situation.And the Twins played it to perfection against the Red Wings. Too bad it is a goal that got buried amidst all the garbage team play in the second and third periods. The game may have been an ugly loss, but this goal was one of the season's most beautiful plays.