#4 on the list of the top Canucks seasons: 1991-92. This was the season that the Canucks core group that would comprise its famous 1994 Stanley Cup Final run coalesced and showed its potential. The team finished first in the Smythe Division and won an epic first round series against the Winnipeg Jets, before bowing out to the Edmonton Oilers in the second round of the playoffs. The season was highlighted by Pavel Bure's spectacular rookie season and the outstanding play of goaltender Kirk Mclean.

Result: Lost in second round to Edmonton Oilers (4-2)

1991-92 was the season that the Canucks core group that would comprise its famous 1994 Stanley Cup Final run finally coalesced and showed its potential. The roster for this team was littered with names that are familiar to nearly every Canucks fan: Trevor Linden, Pavel Bure, Kirk Mclean, Gino Odjick, Jyrki Lumme, Cliff Ronning, Greg Adams, Geoff Courtnall, etc. The team improved from a squad that the season previous barely squeaked into the playoffs as the fourth seed in the Smythe Division, and subsequently lost in the first round, to one that handily won the division in 1991-92. In fact, the Canucks' 96 points gave them the fourth best record in the entire NHL.

By far the biggest story in the Canucks regular season was the rookie season of Pavel Bure. Bure was drafted under controversial circumstances in 1989, as explained by Joe Pelletier:

"Pasha" was drafted in the sixth round of the 1989 NHL Entry Draft, 113th overall, by the Vancouver Canucks. It would turn out to be a controversial pick at that time because no 18 year old could be drafted after the third round unless he had played more than ten games in 2 seasons in a major junior league. The NHL Media Guide stated that Pavel had only played 5 games the year before, but Mike Penny (the Canucks' Chief Scout) discovered proof in the form of score sheets which had recorded that Pavel had played 11 games in that previous year.

What an important piece of research that turned out to be, Mike Penny! Bure would have to wait over two years after being selected before debuting for the Canucks, on November 15, 1991. Bure's debut game has gone down in Canucks lore as one and, despite the fact that he did not score, highlighted his dazzling abilites:

Bure would go on to score 60 points (including 34 goals) in just 65 games, earning him the Calder Trophy for rookie of the year over budding stars such as Nicklas Lidstrom and Tony Amonte. In his next two seasons Bure would score 60 goals and over 100 points - what an impressive first three seasons in the NHL! Yes, Pavel Bure was very good at hockey:

The Canucks were led not just by Bure, but by their solid core of forwards and the spectacular goaltending of Kirk Mclean. Mclean had an outstanding season, going 38-17-9 with a 2.74 GAA, a .901 SVP, and five shutouts - excellent numbers for the time period. Consider where those numbers placed him in comparison to other goalies:

Mclean's performance may be one of the most underrated Canucks seasons ever. It was truly spectacular, and for a brief time Mclean held his own alongside legends such as Roy, Hasek and Belfour. For his efforts, Mclean earned a Second All-Star Team berth. He also finished an incredibly impressive second in voting both Vezina Trophy and fourth for the Hart Trophy. 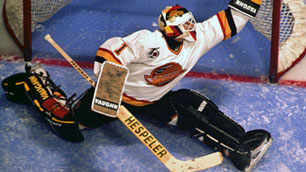 Personally, 1991-92 was a significant season in the development my Canucks fandom. As an eight year-old, I was very fortunate to attend four Canucks games that season, including games against the Detroit Red Wings, Chicago Blackhawks, and Buffalo Sabres (it really helped that you could get $15 tickets at Safeway stores - how amazing is that to think about today? - so both my dad and my brother could afford to take me to a game). And my older brother recorded Canucks games that were broadcast on CBC or BCTV and cobbled together an extended season highlights VHS tape - meaning that I was able to relive key games from this season again and again throughout my childhood and adolescence. One day I want to digitize that VHS tape and post it online. One of the games he recorded, which we watched together on TV, was this awesome 11-0 whooping of the Calgary Flames:

In the playoffs, the Canucks faced the Winnipeg Jets in an epic first round matchup. After falling behind 3-1, despite being the overwhelming favourites in the series, the Canucks stormed back to win three games in a row by a combined score of 21-5 to move on to the second round. Unfortunately in the second round the team was not able to overcome an Edmonton Oilers team that had, in the past few years, been gutted of stars like Wayne Gretzky and Mark Messier. Nonetheless the Oilers defeated the Canucks 4-2 to move on the Campbell Conference Final, where they were routed 4-0 by a very strong Blackhawks side.

1991-92 was, at the time, the greatest Canucks season of all-time. The team had an excellent core of forwards, some solid defenders, a star goalie and, for the first time in its history, a true superstar in Pavel Bure. It was also the first time the Canucks had won any major hardware at the NHL Awards, as Bure captured the Calder Trophy and Pat Quinn won the Jack Adams as the NHL's top coach. Two years later, with more maturity and experience under their belts, this core group of Canucks would lead an amazing playoff run that would ultimately go down as one of the greatest Canucks seasons of all time. But that is a post for another day.