Canucks Brunch- This History Of Me And You

Distractions are awesome, aren't they? The obvious focus has to be on getting two much needed points, but anytime the Canucks and Blackhawks meet, there's fireworks aplenty. Add in this is the first time the teams have met since Duncan Keith's brutal headshot on Daniel Sedin. Obviously there's going to be hell to pay tonight, but it has to be an afterthought. Take care of the scoreboard, then call the bitch out. Oh yeah, and did you guys hear something about a goaltending controversy?

Share All sharing options for: Canucks Brunch- This History Of Me And You 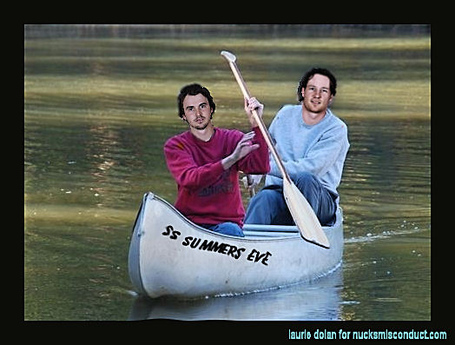 The natives called it "dooshkanoo"

Forget the LA game, this is the first game that actually means something. Tonight the Canucks look to build on a strong 3-0 performance against the Avalanche by welcoming Duncan Keith, Dave Bolland and Jonathan 'This is my happy face' Toews to Rogers Arena for the first time since Keith tried to decapitate Daniel Sedin in late March of last year. While the smattering of Canucks fans calling for someone to injure Keith need to give their damn heads a shake, I do understand those that feel justice must be served. I would be satisfied if Keith drops the mitts tonight against someone of similar size, and then receives the beating he so richly deserves so that we can put this nonsense behind us. Had Brendan Shanahan had the testicular fortitude to treat Keith like the serial headshot artist that he is, and give him a suspension that was actually a punishment as opposed to a rest before the playoffs started, I would feel even less like it mattered. So we'll see how it all plays out, but it has to be secondary to the game, and I am sure that will be the case. 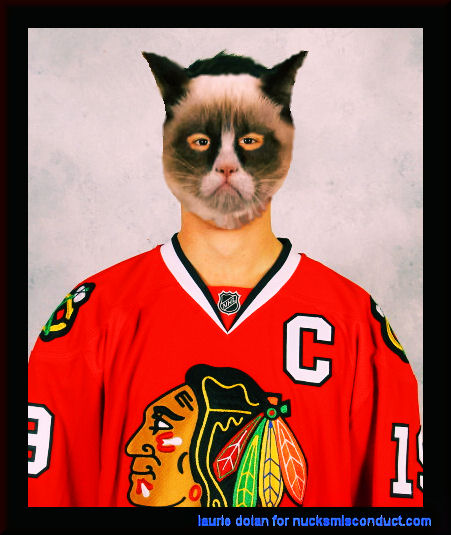 "We're playing the Canucks tonight, don't forget that the Canucks are responsible for everything bad in the world"

The Blackhawks are off to a hell of a start so far, the only blemish on their record so far the Wednesday night shootout loss against the Minnesota Wild. So are these Hawks are for real, or is this just a fortunate start? A look at their schedule so far shows all these wins rattled off against teams no higher in the standings than the 8th place Detroit Red Wings save for the one goal win over the St. Louis Blues. As a matter of fact, their last 5 games have been decided by one goal. After a trick-shot loss in Minneapolis, this smells like a team due for a blowout loss.

And what is gonna be the key to tonight's victory? The real best revenge in a huge game from the Sedins, who are are definitely due for a huge game having gone three games without a point. The first line of Daniel, Henrik and Zack Kassian are going to give the Blackhawks all they can handle tonight, as they haven't had to contend with the twins to date with the kind of physical presence that Kassian brings. And that brings us to loathsome scumbag Dave Bolland. Bolland's been a thorn in the Canucks' sides (though saying that, his impact has been greatly overstated) in that he continues to get away with taking liberties and cheapshots against Dank and Hank. One would think if Ben Eager was capable of sending a text message without help from an adult, he'd be warning Bolland about what happens when you Release The Zacken.

Goalies, right? It's actually transcended being annoying and gone full on into comedy seeing people desperate to churn out the 'goalie controversy' even with other genuine situations around the league. This was a no-lose situation for the Canucks when it came to who to start. Luongo's regular season record against the Hawks is impressive, and coming off two solid outings, why not let him play against the team that he loves to beat? On the other hand, they could just as easily turned to Schneider, who by now is chomping at the bit to get back between the pipes. Forget what so many idiots like Mike Milbury try and tell you. Teams would kill to have this problem.

Burger King? Turns out the burger was King...

Oh Brad Marchand, you and outraged Bruins fans warm our hearts when you all get outraged. Forget that Marchand has come out for the second time this week with a statement so hypocritical you could be excused for thinking it was an article from The Onion, he also conveniently skews the facts on the incident. But that seems to be a Bruins trait, so it's hardly a shock... And yeah, Boston media and fans getting upset about people mocking Thornton after getting his clock cleaned? Adorable. I bet Max Pacioretty and Sami Salo think it's adorable too (hint: read the comments, Irony is beautiful, ain't it?)...

A band I have been a fan of for a long, long time now, Prong are still kicking ass, and I thought this tune was appropriate for tonight's match