Behind The Numbers - Advanced Stats Game #30 Canucks vs. Predators

Share All sharing options for: Behind The Numbers - Advanced Stats Game #30 Canucks vs. Predators

The next  two games ARE very important. Phoenix, and to a lesser extent Colorado, are my two picks to fall off their 'hot' pace. Vancouver simply must win the seasons series with these two teams. If they do this the research says they will improve their playoff chances significantly.! Phoenix will be playing their 3rd game in 4 nights. It IS virtually a MUST win! (With 50+ games to go?! :) ) Will we see the  NHL refs  favor PHX? - And, work hard to help out a new, sunbelt US owner?...Stay Tuned! 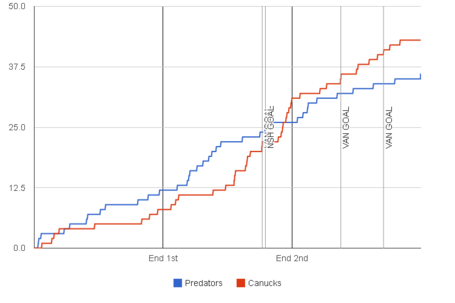