The Canucks POTW is a weekly feature that breaks down the best play from the past seven days. This week: Jason Garrison breaks his slump and scores the winning goals vs. the Ottawa Senators. 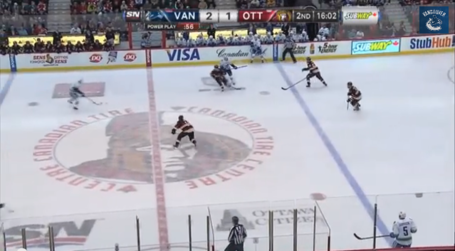 The set-up to this goal is all thanks to the Sedins. Here, Henrik (top left) has the puck and is looking to gain the zone on the powerplay. 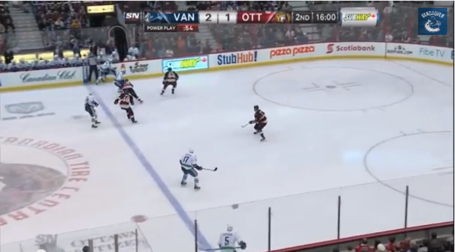 Henrik does gain the zone, before dishing off to Daniel. Right now this does not look too promising, as the Senators seem poised to pressure Daniel and gain possession. 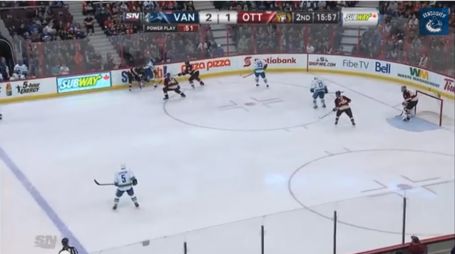 I've written this before, but the Sedins have an impressive ability to draw the attention of the defense and open up space for their teammates. In this frame, three Senators' penalty killers are focused on Daniel, the puck carrier. This may be a PK tactic, or it may be the on-ice magnetism of the Sedins, but regardless there is lots of open ice and passing lanes if Daniel is able to win the puck battle and the can Canucks maintain possession... 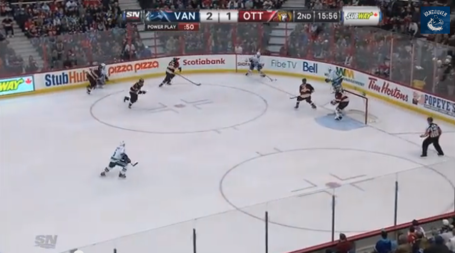 ... which they do! Daniel works the puck to Henrik, and now the Senators are in trouble. All four of them are in one quadrant of the defensive zone, meaning there is loads of open space, and Henrik has a wide passing lane to find Garrison moving in from the point. 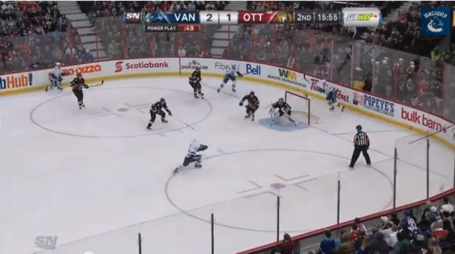 Henrik has no trouble making the pass and Garrison gets off a nice shot for the goal. It is now 3-1 Canucks, in a game that would ultimately end up 5-2, making Garrison's goal the game winner.

The Canucks have had a few key players in deep slumps lately - Alex Burrows, David Booth and Jason Garrison are three that particularly come to mind. While Burrows still searches (and busts his ass) for his first of the season, both the ex-Panthers got off the schneid last week. Garrison, a potential powerplay lynchpin given his canon of a shot, finally heated up again after a slump that saw his great offensive start go in to decline.As Zanstrom put it in his game recap:

David Booth and Jason Garrison, 2 Canucks probably under the most scrutiny, each scored a goal and an assist. Garrison's goal was on the power play. We like that, don't we? It was also the game-winning goal.

Dead on. Garrison got the game winner and busted his slump, the Canucks awful powerplay continued its recent turn toward decency, and Vancouver won a key two points to kickstart their Eastern road trip. And the goal even came off of some nice Sedinery. For that, Garrison gets POTW honours.