The Canucks POTW is a weekly feature that breaks down the best play from the past seven days. This week: David Booth scores vs. the Bruins after Coach Tortorella rips into the team during a timeout. 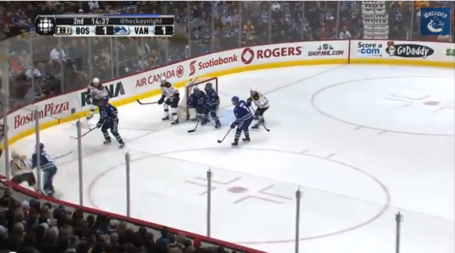 I'm going to do something that there has not been a lot of cause for this season: praise Zack Kassian. This goal comes about because of his work in both the defensive and offensive zones. Here, Kassian lays a nice his on a pinching Dennis Seidenberg (#44), forcing the Bruins d-man to throw the puck along the boards to the man behind the Canucks goal. Note that four Bruins (and Canucks) are below the faceoff dots right now. 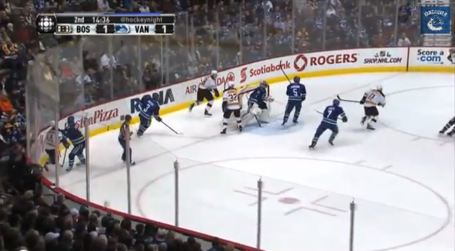 Seidenberg's teammate can't handle his pass and the puck rings around the boards. Booth (#7) has turned and is ready to race up the ice. 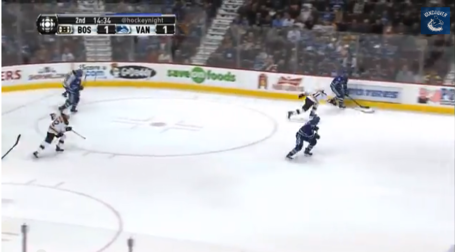 Brad Richardson collects the puck along the boards and hits the streaking Booth. 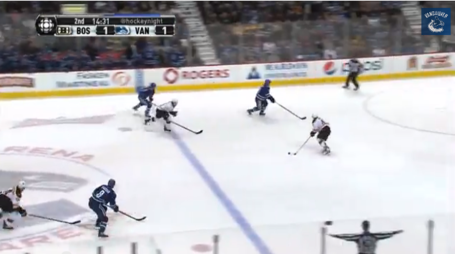 Richardson follows Booth up the ice, but is well covered by his man. But who's this busting up the ice to try to turn this into a 2-on-1 rush? Why it's Kassian! After taking Seidenberg out of the play, Kassian hustled up ice leaving the Bruins defender trailing in his wake. Though Kassian is well behind the play, the fact that he has beaten his man means that the other Bruins defender cannot fully commit to defending Booth - he has to be aware that Booth could slip a pass into open space for Kassian to skate on to. 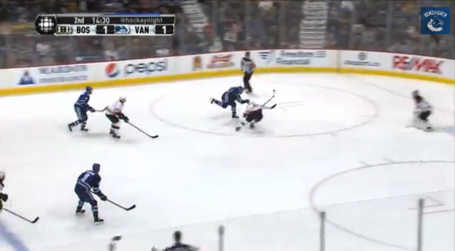 The threat of Kassian means that the Bruins defender has to give Booth more time and space than he would otherwise. While not much extra time and space, it is enough for Booth to get a good wrist shot off from the top of the circle. The defender commits to Booth too late, and is unable to interfere with him taking the shot. Note that Kassian is in decent position should Rask give up a rebound - ideally he would be a little closer to the net, but he has at least positioned himself to have a play on any potential rebound. Fortunately, this was not necessary, as Booth's shot beat Rask and gave the Canucks a 2-1 lead.

The Canucks continued to roll last week, winning games against the Carolina Hurricanes, Edmonton Oilers and Boston Bruins. But, with all due to respect to the 2006 Stanley Cup combatants (boy, those teams' fortunes have gone downhill, huh?), the matchup every Canucks fan had circled on the calendar was Saturday's tilt against the Bruins.The game lived up its expectations in terms of intensity, even if the lopsided 6-2 final score did not reflect that fact.

After a fluky goal by Jannik Hansen in the first, the Bruins tied the game on a Reilly Smith goal. Torts was not amused. The coach called a timeout and tore a strip off his team at the bench, exhorting them to step up their game. 1:20 later, Booth beat Rask and 3 minutes later Chris Higgins scored the eventual game-winner; the Canucks never looked back. Talk about an effective use of a timeout.

Booth's goal was the response the Canucks needed to rise to victory over the Bs. And hey, if it awakens the oft-injured winger from his goal-scoring struggles, that can only be a good thing for the Canucks. Here's hoping Booth, and the Canucks, keep rolling.