Behind The Numbers - Advanced Stats Game #28 Canucks vs. Rangers

Share All sharing options for: Behind The Numbers - Advanced Stats Game #28 Canucks vs. Rangers

On the defensive side, we know that the team is not giving up an increased number of scoring chances from previous years. In fact, if anything, the Canucks are actually giving up fewer chances per game this season.

So by my deduction, here are the possibilities:

a) Torts new system is giving up higher quality chances.

Perhaps, but over 25+ games its the cumulative value of the total chances giving up and the Canucks are actually giving up their lowest shot total in 10 years (since the dead puck era of 2003-2004). As well, Torterella's aggressive forecheck and shot blocking system didn't seem to harm Henrik Lundqvist?!  - A perennial Vezina candidate and winner,  with a career elite save %. Moreover, if the coaching system 'was' a significant factor wouldn't we see a spike in the Rangers stats under AV?! Nope! The Rangers are currently 23rd this year right in front of Vancouver. The Rangers have dropped as well, (they were 15th, 7th, and 9th in the three previous years under Torts).

b) Luongo's performance has dropped due to age.

My feelings are clear from previous posts. This 'is' a significant issue even if the mainstream media is slow to the mark. In fact, Donny Taylor, and Johnny Garret of SportsNet and others are still calling Lui the best Canuck this year?! In fact, we saw a similar dip from Martin Brodeur around this age. However, I will add that facing fewer shots can be an adjustment fro some goalies and is something Lui hasn't had to deal with until this year.

c) There 'is' some bad luck involved and these numbers will even out somewhat.

I believe this is small factor.

I also believe this could be a a small factor but doubt that it would be a large effect. I would have to run the numbers to find out. 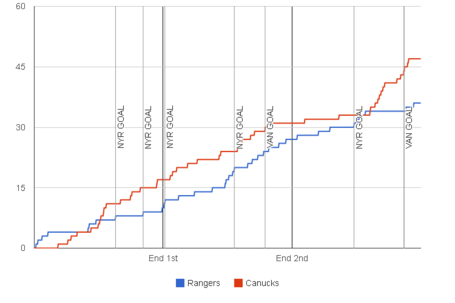