Behind The Numbers - Advanced Stats Game #26 Canucks vs. Kings

Share All sharing options for: Behind The Numbers - Advanced Stats Game #26 Canucks vs. Kings

{My apologies, due to computer difficulties I wasn't able to post the stats for the last two games. i have fixed the issue and they will be done this week when I can catch up!}

{However the Expected Score most likely outcome was 3 -2 LA at even strength!}

And, for those worried Canuck fans,  in the last 10 games they have a ~57% Pos. F Close rating.They now rank 6th in the league, at ~54% for the season. This is the teams' highest ranking since 2011, when they were third. The short term issue is that possession numbers are only statistically significant with team wins over larger samples 25- 65 games are best.

Unfortunately, over small samples the two biggest factors that decide games are Goaltending and Special Teams production. Whether Roberto Luongo can return to his 'elite' form is an open question. However, it is now time for GMMG to make a trade to improve the power play. It has now been a large sample and two coaching staff  with no improvement.

For scoring improvement, I recommend acquiring Mike Cammalleri. He has strong career sh% of 12%. He has been a consistent 25 goal scorer.He has above average powr play numbers. He is 31 (in the same age range as the Canucks other core players). He has played in a tough Canadian market (i.e. Montreal). He has got on a roll in  the playoffs. He is a former client of Mike Gillis and was rumored to be coming to Vancouver a few years back. And, most importantly, I believe, he is Italien! And, I want to hear John Shorthouse of Sports Net struggle on air  with the...." It's a pass from  'Santorelli to Cammarelli' !

Cammarelli is an unrestricted  free agent (UFA). So, Gillis would need to have a strong indication he could be resigned next year when the salary cap goes up. (No more rental players please!) The Canucks would also have to give back ~ 2.5 million in salary to the Flames. Time to make it happen Mike?! {Hansen? Tanev? and bring Frankie Corrado up...other suggestions?).

Also, if you have any questions about advanced stats and would prefer to email me you can reach me at danthestatman1@gmail.com. I would be happy to try and answer them! I learned a lot this way when I started! 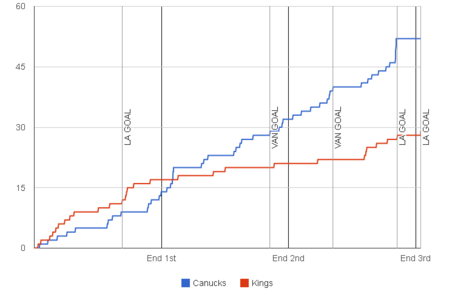