Canucks POTW: Daniel busts his slump against the Blue Jackets

The Canucks POTW is a weekly feature that breaks down the best play from the past seven days. This week: Daniel Sedin opens the scoring for the Canucks against the Blue Jackets

Share All sharing options for: Canucks POTW: Daniel busts his slump against the Blue Jackets

Sean Larson described this goal very well in his recap of the game:

The pace of the game picked up in the final moments of the first period as the Canucks continued to get quality chances on net. Finally, with just 15.4 seconds left in the period, Daniel Sedin tied things up with a late goal before the intermission. The play started with Alex Edler lobbing the puck over the defense behind the net and Daniel playing it off the boards and around the net. After the puck deflected off 58, Daniel had a little more room to work with to set up the goal, tying things up at one goal each.

Here's the visual breakdown of what Sean described: 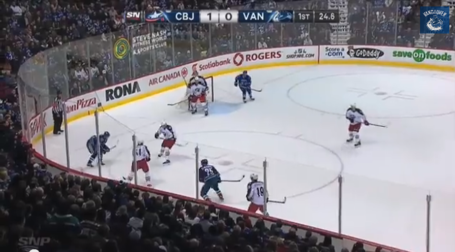 The goal happens because the Blue Jackets are unable to clear the zone. Here, the Canucks forwards apply good pressure to the Jackets' defenders and force the weak clearing attempt. Notice Daniel lurking near the Jackets' net, waiting to pounce like the predator that he is. 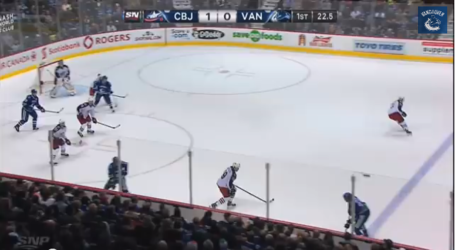 Edler does well to keep the puck in at the point, and has a fair bit of time to decide what to do with it. Down the boards to your winger seems like a good bet, hey Alex? 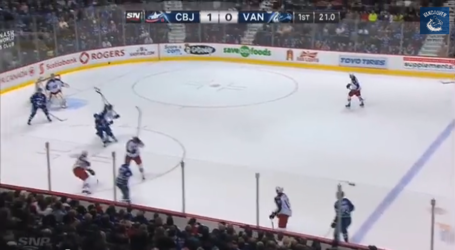 Wait, what?!? You're going to lob the puck over three opponents and two teammates because Daniel Sedin is open in front of the net? Okay sure, why don't you do that instead. 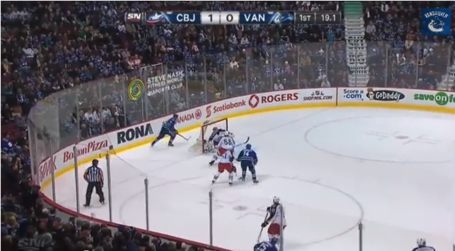 The lob pass works, sort of - Daniel has to control the puck behind the net instead of in front of it. But he is not being checked and has time to work with the puck from behind Bobrovsky.... 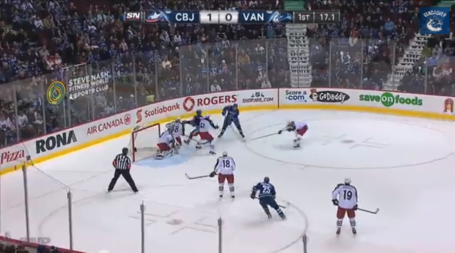 ... and work with it he does! Daniel moves out from behind the net and snaps a shot from a tough angle. It takes a lucky deflection off a Blue Jackets player and into the top of the net. Despite the good fortune of the deflection, this was still a really nice piece of work by Daniel to get himself from behind the net and into a scoring position while maintaining possession of the puck. That good work pays off as the puck gets past Bobrovsky to tie the game.

It was yet another frustrating week for the Canucks, with a brutal OT loss to the Florida Panthers and a disappointing 2-1 loss to the Chicago Blackhawks. Good thing we had a blowout win over the Blue Jackets as a silver lining. The Canucks poured six goals past the reigning Vezina Trophy winner, Sergei Bobrovsky, in a much-needed offensive outburst. Daniel's goal started the scoring for the Canucks and, coming as it did with just 16 seconds left in the first period, allowed the team to head to the dressing room with something to show for their hard work in the period (including outshooting Columbus 14-4). It also got Daniel out of a 6-game point scoring slump.

All in all, it was not a fantastic week for the Canucks. This goal, and the win over the Blue Jackets, were among the few bright spots.