It's the biggest day in Canadian Football, as the Hamilton Tiger Cats are in Regina to take on the hometown Saskatchewan Roughriders. It's gonna be cold. And it's gonna be awesome. 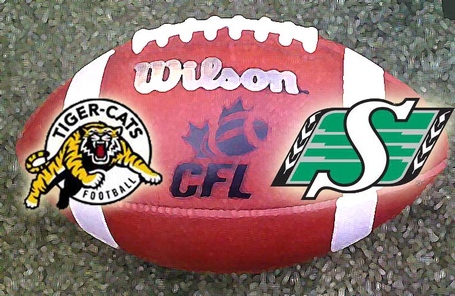 Heading into this 101st version of the Grey Cup, much of the focus has been on the Riders and would they be able to make it.  They dispatched a banged up BC Lions squad, then took out the favoured Calgary Stampeders in the Western Final to give Rider Nation something they'd dreamed about since they were named the host of this year's game: a chance to win it all in front of their fans.

The Hamilton Tiger Cats started the year at 1-4, but turned things around as the season progressed.  They defeated Montreal, then pulled off the come from behind victory over the defending champion Toronto Argonauts, thus sparing the CFL of the embarrassment of having Rob Ford become a distraction at the game.

These are two pretty evenly matched teams, but home field advantage and the weather will likely favour the Riders.  The temperatures are not as severe as they were earlier in the week, though winds will be around 30 kmh, gusting to 50, making for some windchill, and putting a little more focus on the kickers as they deal with the winds at Mosaic Stadium.

If you're watching the game today, one thing I would like to see is some of your favorite Grey Cup memories, what you're doing foodwise, and of course, predicitions.  Game time is at 3pm PST and it's on TSN.  I'm going to enjoy this game, as I am from Saskatchewan originally, and Laurie's family live in the Hamilton area.  I expect at least one phone call from her mom during the game :)