To Score or Not To Score...

A look behind the numbers at the Canucks scoring troubles. Using advanced analysis or principles, the teams' historical performances for even strength and power play goals scored are charted, compared and evaluated. And, a surprising conclusion is discovered?!

Share All sharing options for: To Score or Not To Score...

The Canucks are in a slump. They simply cannot score enough goals. They have just 6 goals in their last 5 games. They currently sit in 9th place in the very competitive Western Conference and are out of a playoff position . Predictably, the local radio airwaves are filled with 'Chicken Littles' already proclaiming the end of Vancouver's playoff run.

So, just how desperate is Torts and his coaching staff? I wonder, would they consider an 'old school' tool that former coach Alain Vigneault once himself pondered using when the team faced a similar drought back in 2007? Hmmm...... 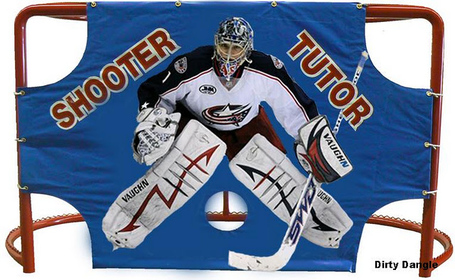 In the meantime, let's take a look behind the numbers at the Canucks scoring. As always we will use advanced analysis or principles. However, this time we will be only looking at traditional stats. I will use the straightforward,- 'goals scored'. And, for a change, I won't use any advanced stats.

The first step is to make a significant distinction between power play scoring and even strength scoring (or non-powerplay scoring). Of course, these are clearly two different game stats and need to be treated as such.

Secondly, many analysts will often state, "This team has been awful!" Or, "That team has been great!". However, we need to first define precisely and numerically just what 'awful' or 'great' performances mean in the context of (ES) scoring that we are evaluating. So let us familiarize ourselves with objective and accurate baselines.

My approach is simple. I have created five buckets.

{Those of you familiar with statistics will recognize that I have simply used standard deviations from the mean. 'Good', for example, is +1 standard deviation.' Elite' is +2 SD's, Bad is -1 SD's, and 'Awful' is -2 SD's}.

We can now use these baselines to get a framework for accurate and meaningful evaluations. We will use historical data form 2006 - present. 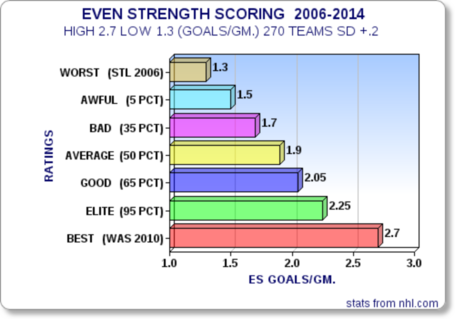 Now let us look at this years performance so far in the Western Conference. 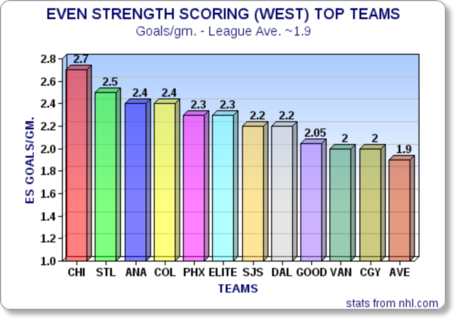 Let's take a quick look at the bottom group of teams. 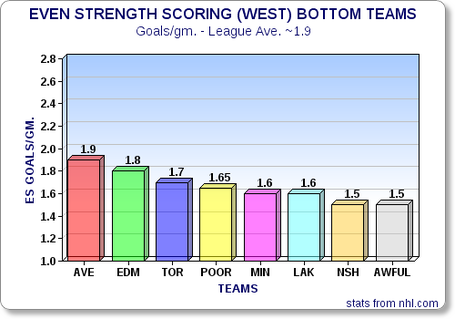 Next, we need to compare the current Canucks' scoring performance to past teams to determine to what extent the team 'have' or 'have not' met reasonable expectations this year. 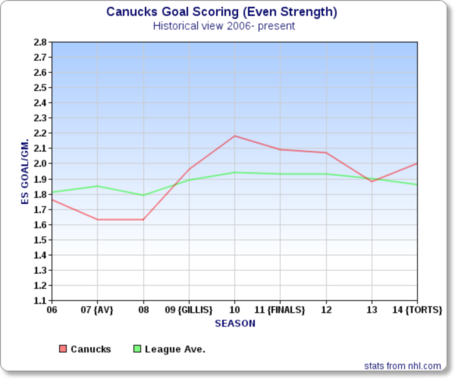 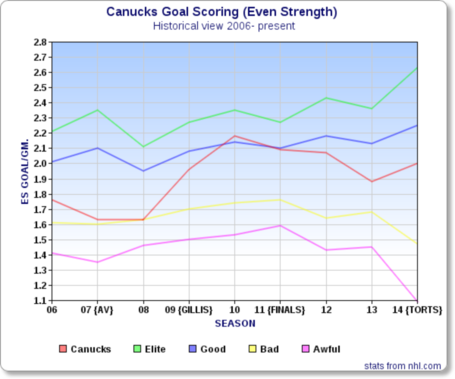 Even strength goal scoring has had a minimal contribution to the Canucks downfall over the last 2 years! 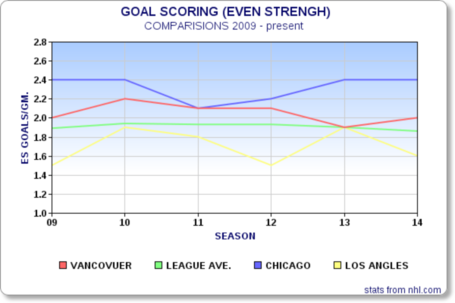 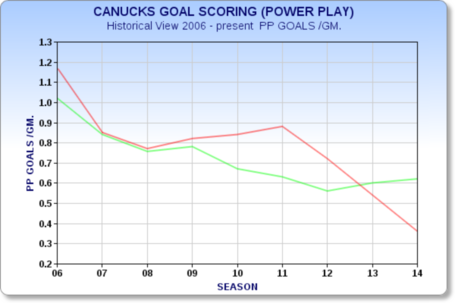 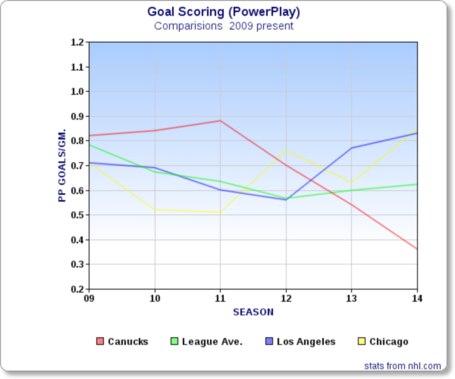 Of course, most fans are rightly worried about the Canucks' scoring woes. However, we have clearly seen that Vancouver has never been an elite scoring team at even strength. In fact, their highest ranking in the last five years was ~ 66 (PCT), or what we have characterized as only a 'good' (ES) scoring team. And, this year they are very close to that expected level. The team has not added significant offensive skill to the roster. Most importantly, with the core of the team aged 28-33, I contend that it is unreasonable to expect the Canucks to score above a 'good' level at ES this year.

Expectations are a strange animal? The 2011 season was intoxicating fro the city of Vancouver. So much so they never really realized the 'way' their team was so successful?! Still, even with all the criticism, in terms of (ES) scoring there is only a 5% difference between 2011 and this years' team. ! In contrast, the Canucks' powerplay amounts for 65% of the decrease in scoring.That leaves ~30% of the team's decrease in goal differential to account for.

Finally, in part 3, I will look at the Canucks' historical goaltending / sve.% numbers and possession metrics.

Then we can clearly and accurately explain why the Canucks have fallen from - "the #1 President Trophy Team' - often described as having their "Window Wide Open" -- to the current - 'Middle of the Pack Team' - "with their "Window Closed Shut".

Thanks for reading. Feel free to add your comments below!